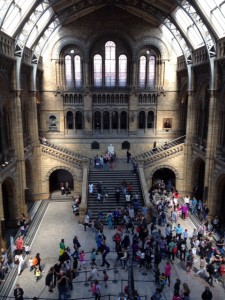 Virgin Trains reinstate a direct twice-daily train service from London to Shrewsbury today  (December 15 2014). The new link is likely to enhance the town’s appeal as a day trip and weekend-away destination.

It’s a matter of touristic distinction to be joined to the capital by a through service. London is, after all, where most overseas visitors begin their journeys. And direct trains do matter for destinations. Changing is a chore, and can be inconvenient. Why travel to Shrewsbury from London and the south, with a break, when you could go direct to Chester, not so far away. (Chester knows what it’s like. It regained direct trains from the south not so long ago.

I took the train to Shrewsbury recently. This is a handsome border outpost on the edge of Wales, one of ”England’s finest Tudor towns, studded with half-timbered houses. It sits within an almost circular loop of the River Severn.

The recent evolution of the town as a tourist destination has been driven by Charles Darwin, Shrewsbury’s most famous son. They marked the bicentenary of his birth here in 2009.

The young Darwin, who went to school in the town, made a crucial observation here that convinced him the world was very much older than a few thousand years, which was the conventional, church-approved understanding.

The time-smoothed Bellstone rests in the courtyard of Morris Hall, in the centre of town. But it doesn’t belong here. It struck Darwin that geological forces, working over vast ages, must have moved the stone here, many miles from the Scottish Borders, where it is usually found.

The stone is one of the stops on the Darwin Trail. Other stops include the elegant round St Chad’s Church, where he was baptized, and his old school, where he didn’t wash his feet – “I confess it is nasty, but we have nothing to do it with”. His statue stands outside. There are some striking monuments to the man – the Darwin Gate with its clever alignments, and the remarkable 40 feet Quantum Leap, marking the 200th anniversary.

Just over the English Bridge is Shrewsbury Abbey, where the fictional Caedfel solved crime. First World War poet Wilfred Owen is buried in the Abbey grounds, under a shrine representing his stark paean to brotherly love “A Strange Meeting.”

From there I followed the curling path along the banks of the Severn, with a motley company of walkers and joggers and a cycling cox urging on skullers on the river, to the park BBC Gardener Percy Thrower tended when he worked here.

Over the river is Shrewsbury School, site of cricketing poetry. The great cricket writer Neville Cardus worked there around 1912: he would “gather the stumps from a dozen pitches and carry them in sheaves, a solitary reaper in the evening sunshine.” I ended my walk at the Welsh Bridge, at the Armoury pub (great use for an old industrial building, opposite the new Theatre Severn) for a pint of Shropshire Lad. (There are important trains connections deep into Wales, to Swansea and Aberystwyth and beyond.)

One of the points of distinction in this town is it’s restrained shopping landscape. Think of Shrewsbury as a retail equivalent of a wagon train in the American West, with hundreds of independent shops huddling together for economic security.

They line the town’s suddenly sloping streets, its ancient passages and crooked ways, selling top notch chocolate, old books, hand rolled cigars, Japanese groceries and much more. The specialist shops opted for online salvation, and grouped together under the banner All The Little Shops of Shrewsbury – a marketing ploy since taken up nationally. And there are distinctive restaurants to match – I liked the Cornhouse restaurant, using local produce (www.cornhouse.co.uk). And the Bellstone (www.bellstone-hotel.co.uk) for lunch. www.shrewsburyshopping.co.uk.  www.allthelittleshops.co.uk

Five miles north east of Shrewsbury is Wroxeter. Dickens was one of the first to gape in wonder, in 1859, at the great wall of a Roman bath house recently unearthed here. This garrison, where Roman Watling Street met the River Severn, was a thriving city for retired (evidently fitness-obsessed) soldiers. After 1400 years of underground slumber, this huge site, the fourth largest Roman town in Britain, became one of the first archaeological visitor attractions.

The excellent museum explains the health and beauty practices of 5000 citizens, and how Romans kept fit in chilly Britain. Among impressive features are the 2nd-century municipal baths, and a big chunk of the huge wall dividing it from the exercise hall. The Roman vineyard is next door.

Venerable Wroxeter has a new attraction. A team of builders, with no previous experience of traditional techniques, mastered 2000 year-old methods to construct, largely by hand, a “new” Roman villa. Their exertions were charted in Channel 4‘s ”Rome Wasn’t Built in a Day”.

The facsimile high status Roman town house was based on an actual building excavated at what was the Roman city of Viroconium. The programme showed the testing, non-mechanised toil the builders put into the project, mixing by hand huge amounts of lime mortar and plaster.

Building blocks were hewn from the raw sandstone, and carried on site by hand. Interior decorations included frescoes and mosaics, were designed and executed by the workmen. They followed Roman tradition, working lucky phallic symbols Into the brickwork. The completed villa, painted bright yellow and red, is a conspicuous landmark over the flat Shropshire fields. In the care of English Heritage, it can be visited.

Another short trip from Shrewsbury (although to do it justice you need to spend at least a day here) is  Ironbridge, 17 miles, or about 40 minutes away by bus. In 2014 the Ironbridge Gorge Museum Trust won the ‘Gold Star Green Tourism Award in Museums’  at the prestigious national Green Tourism Business Scheme Awards.

I stayed at the Lion, in Shrewsbury. This 16th century coaching inn could make a coherent claim to have altered the course of science? A certain harassed young man in a frantic hurry – that was Charles Darwin – was grateful for the stratospheric speed of the “Shrewsbury Wonder” coach to London – 158 miles in under 16 hours. The Lion’s owners had started the service a few years earlier.

We know that Darwin only just caught the Beagle, for the voyage that led to his theory of evolution. Without that express coach, there is speculation he could have missed the boat. The rest might not have been history.

After the railways finished off the Wonder, management concentrated on running a hotel of distinction for guests such as Disraeli, Paganini (who performed here) and Dickens, who worked on Pickwick Papers here. Many fine old features survive – the mazy corridors, creaking wooden floors, big old beds and the magnificent Tudor fireplace.