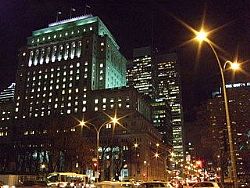 There’s nowhere in North America quite like Montréal, the second largest French-speaking city in the world after Paris. Thinks baguettes with skyscrapers.  The writer visited Canada’s bilingual big city, where the standard greeting is ”Bonjour-Hi”,  and give six good reasons to make a long winter weekend of it, including  endless cosy underground shopping, the hotel fit for our queen, and an Olympic-sized view into the far beyond.

Perfect weather down below.

Montréal’s mercury lingers well below zero every winter. But provided you check the weather before you leave home, and don’t spare the gloves, woolly hats and snug footwear, the dry chill is a bracing change from dull, drizzly days at home. Besides, it’s always spring in Montreal’s secret weapon against the weather, Underground City (RÉSO). It’s the world’s largest system of subterranean walkways, lined with shops and eating places (about 20 miles in total). You could check in at a  downtown hotel and catch a movie or a concert, eat at hundreds of cafes and restaurants and shop in the big stores, without venturing outside. There could be a blizzard raging on the streets above, and you would never know while you enjoy a drink at a café in an underground “square” below, next to tinkling  fountains  and hanging vines.

I rode the funicular to the top of the leaning tower over the Olympic Stadium, part of the “legacy” from the 1976 games, and one  of the best city viewpoints on the continent. Spread out below is the simple geography of this city’s success. Shining skyscrapers stand in a bend in the St Laurence, the river that mde the city rich, still mighty at 1000 miles from the sea. To the north, the majestic sweep of the Laurentian Mountains, the city’s playground, full of walks and cycle trails. There’s a bonus up there in the winter. With so much snow, there’s plenty of skiing  just an hour away. If you can”t get there, they recreated a living Canadian woodland habitat in the  Biodome next door (the former Olympic velodrome), complete with beaver, diving ducks and rare river fish. It’s a short walk over to Montréal”s Botanical Garden, one of the best after our own Kew Gardens.

Treasure of the arts.

It was cold and dark when I walked into the Montreal Museum of Fine Arts  (free, and open until 9pm, Wed-Fri.) But inside it was aglow with visiting Roman treasure. The two gilded, larger-than-life men on horseback may have been assassins of Julius Caesar. Recently restored, the Bronzes of Cartoceto di Pergola are rare examples of this type of sculpture. Only the Horses of Saint Mark’s in Venice are as splendid. The big attraction at this excellent museum, one of the best in N America, on my visit was the biggest exhibition of Cuban art and history assembled anywhere. And there’s an impressive  permanent collection of paintings, ranging through Canaletto, Rembrandt, Renoir and Cézanne, to Picasso, Matisse, and Miro, many of them bought by the city’s prosperous founding fathers.

The bagels to beat.

Is this the world’s best snack with a hole in it? The whole of New York might argue the point, but the bagels they sell as St-Viateur Bagel’s three outlets, and at Fairmount Bagels, are “queue out of the door” quality. Smaller, sweeter and denser than the standard New York-style bagel, and with a larger hole, Montreal bagels are always hand, not machine, made. They use malt, egg, and no salt, then  boil them in honey-sweetened water before baking them in a wood-fired oven in full view of the customers. St-Viateur, the connoisseur’s choice, serve just two types, poppy seed and sesame seed, made to the original recipe the founder brought from Eastern Europe. An anytime snack, they are also  good as a light lunch, with soup or salad.

Style in all sizes

There is a cluster of stylish boutique hotels in old Montreal down below the Notre-Dame Basilica and one block from the Old Port, in a network of streets full of art dealers, restaurants and wine bars. I stayed at the small and snug St Sulpice. It has a lobby to linger in, golden wood on exposed stone, that insists you snuggle into a deep leather sofa  beside a roaring fire with the newspapers. If you prefer the big and busy, the city’s grandest hotel is the city centre Queen Elizabeth where HRH stays. In 1969 Yoko Ono and John Lennon set the record for the world’s longest lie-in here when they staged a weeklong ”Bed-In for Peace” in room 1742, and recorded Give Peace a Chance. Stay in the very room (souvenir “Bed-In” pajamas and white flowers included)

I half expected a tap on the shoulder from the health police at Au Pied de Cochon (The Pig’s Trotter) when the waiter served my Foie Gras Poutine (French fries and fois gras, cheese curd and a mushroom gravy). It’s one of their specialities on a cholesterol-laden carnivores’ delight menu (traditional Quebec local dishes such as bison tongue and monster pork chops). I assuaged my guilt with an order of zucchini blossoms, leeks vinaigrette and crab tart. This is one of the hottest places in Montreal’s  lively restaurant scene, so you must book (001 514 281 1114) Ask for a seat at the counter before the open kitchen to watch a master class by young T-shirted chefs at work (they don’t swear). Try also Santos Café (excellent burgers and beer, 191 St Paul West) and the chic and smooth Cavalli and Restaurant Europea (www.europea.ca)