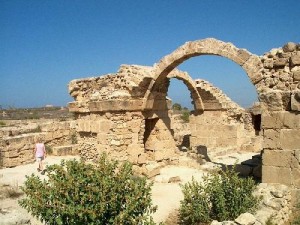 The Cyprus problem is still unresolved, but the opening of Ledra Street in April 2009 was a big step to reconciliation. It is much easier now for visitors to see the island as one big destination. Gareth Huw Davies considers the whole of the long divided holiday island. His must-do list includes newly renovated Turkish baths, the world’s biggest donkey sanctuary and one of the most famous shaded squares in the Med. Photo – Kyrenia Castle, courtesy of North Cyprus Tourism Centre.

Harmony broke out in Cyprus recently when the barriers came down on Nicosia’s Ledra Street ( Lokmaci, in Turkish). You can now walk the entire length of this once-troubled thoroughfare, closed in 1974 after Turkey invaded the northern part of the island, and a long-time symbol of the island’s division. It had been guarded by U.N. peacekeepers ever since.
This new crossing, the sixth to be opened since 2003, makes it much easier to take in the whole Cyprus experience (Greek south, part of the European Union, spending the euro, and Turkish north).
You can stay in the north as long as you like, if your holiday base is in the South (and vice versa). And you can take a hired car from south to north, but ask your hire company first.
A new guide promotes Turkish and Greek attractions in old Nicosia. I liked the recently restored Büyük Han (Great Inn), a 16th century Ottoman inn in Nicosia on a stone courtyard with shops and cafes.

Whoever shot some of the famous wandering donkeys on the Karpas peninsula in the very north of Cyprus in 2008 could have had no idea how this cruel act would unite the divided community. The donkeys are descendants of animals left to roam by farmers when the island split in 1974. After the shooting, outraged Greek and Turkish Cypriots united through Facebook, and launched a campaign to protect the donkeys, which they see as the “symbol of Cyprus.“
Once every household had a donkey, perfectly suited to the rough terrain. Even the British army used them as a beast of burden in World War II. There are about 500 left, free to wander the blissfully quiet peninsula, which is also one of the island’ s best wildlife habitats. They value their space, so don’t come too close.

Scour the entire Mediterranean and you won’t find a more perfect place to rest in the shade with a cool drink on a hot afternoon. British author Lawrence Durrell bought a house in the splendid hilltop village of Bellapais in the 1950s. He immortalised the tree on the square as the Tree of Idleness, and settled many of his characters comfortably in its shade, in his novel Bitter Lemons of Cyprus.
Today you have a choice of shades in which to laze. Two candidates claim to be the official ”idle tree”. There is the mulberry overshadowing the coffee shop; and the nearby Japanese pagoda tree shaded in the Huzur Agac (Tree of Idleness) Restaurant. Nearby is Bellapais Abbey, a 12th Century French Gothic Abbey in the Five Finger Mountains, believed to have inspired Walt Disney’s Sleeping Beauty castle.

For a small island, Cyprus packs some mighty history. It holds three UNESCO World Heritage Sites, the top ranking of historical treasures.
One site is the entire city of Paphos, listed for its remains of ancient villas, palaces, theatres, fortresses, tombs and some of the finest Roman mosaics found anywhere. Also on the UNESCO list are the Byzantine Painted Churches in the Troodos Mountains, all richly decorated with murals. They range from small churches, simple enough outside but splendidly decorated within, to fine monasteries such as St John Lampadistis. Cyprus’s third UNESCO site is the Neolithic settlement of Choirokoitia. Another historical highlight is the Shipwreck Museum at Kyrenia, displaying the remains and contents of a vessel that sailed here during Alexander the Great’s time.

One of the leaders in the fight to reinstate authentic Greek Cypriot cooking is the Seven St. Georges taverna in the village of Yeroskepos in the hills above Paphos. Owner George Demetriades and his wife Lara opened this place, serving classic local cuisine using organic ingredients, in 1996. And it’s still one of the best on the island. No complicated menu to negotiate. Simply say yes to George’s endless mezzes. Nobody forces you to move on to a main course, but if you must, try the lamb tavas, slow-cooked in a clay pot with tomato, onion, cumin and white wine. Or the kleftiko, a slow-roasted lamb dish. For another genuine taste of Cyprus, try Kouppas in the stone village of Neo Chorio on the Akamas peninsula. Specialities include beef stifado; and afelia, slow cooked pork in red wine with coriander seeds.
Notios, in the Almyra hotel, is one best new restaurants, for Mediterranean-Asian fusion cuisine.

It’s one of the great pampering pleasures of Turkey, and now you can find it in the heart of the old town of Nicosia. Omeriye Hamam is a famous old Turkish bath, restored and operating again in its 14th century premises, the stone-built Augustinian church of St. Mary in a joint European Union and United Nations project designed to build peace. And boost tourism.
Lie back in these ornate rooms and relax in a centuries-old tradition. The hamam is something like the sauna, but with added perspiring, all-over soaping, exfoliating, splashing in cold water and invigorating pummelling. I defy you to come out of these complex but painless rituals and not feel revived, refreshed, improved inside and out, serene and ready to murder a Turkish tea with dates.