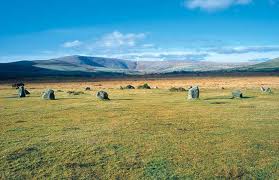 (This article was first published here in April, 2014.)

The Golden Road. What adventures spring to mind? Riding a great, gilded highway as it strikes east across the steppes of Central Asia? Bumping along an ancient trading route down through the sands of Arabia?

No need to venture so far. We have a Golden Road on our doorstep in Pembrokeshire, running along the spine of the Preseli Hills (Mynydd Preseli). It is one of the finest high-ground walking ways in Wales.

This venerable route links ancient monuments and burial places, cairns and rocky tors. Its principal features include two of the possible quarries from which archaeologists believe stones were taken to Stonehenge 4000 years ago.

The experts still debate the importance of the gently undulating Golden Road, but nobody argues about the glorious view. You can see west as far as Ireland, deep south into South Wales, and north up the majestic arc of Cardigan Bay towards Snowdonia.

Some believe the function is explained by the name. They see the road, which may date back 5,000 years to Neolithic times, as part of a trade superhighway, along which gold mined in the Wicklow mountains in Ireland and brought across the narrow sea was then carried south east as far as Wessex.

Or was this route just one more of the hundreds of ridgeways, the high trails which people and animals took to avoid the dense forests and difficult and dangerous terrain at lower levels? We may never know its true origins, lost in prehistory. Its recreational value today, however, is beyond doubt.

The seven miles west-east trail begins at Bwlch Gwynt, not far from Foel Eryr. (Bwlch Gwynt is on the B4329, about 2 miles north of the crossroads with the B4313. The Golden Road ends in a lay-by at Llainbanal, one mile west of Crymych. Allow four hours to walk its full length.)

Foel Eryr is a dramatic start indeed, the “Place of the Eagle”, with a Bronze Age burial cairn at its summit. That formidable bird has been missing from Wales for many years, but buzzard and red kite glide speculatively overhead, and wild ponies browse this raw grassland.

Just after the path passes the Pantmeanog Forest (to the south), it’s worth taking the footpath the short distance to the highest point in the Preselis, the 1,759 high Foel Cwmcerwyn.

Walking on east you come across notable ancient (man-made and natural) landmarks, such as the Bronze Age burial cairn at Foel Feddau, one of the finest in the Preselis. There’s a view north to the coast, and the site of Castell Henllys, the ambitious reconstruction of an Iron Age fort.

The rocky tor Carn Bica, with its large lozenge-shaped rock, overlooks Beddarthur, a ring of stones in the shape of an eye, one of many places recorded by antiquity as the grave of King Arthur. In truth this monument dates back to Neolithic times, so it as erected long before when Arthur is believed to have lived, some time between 400-600AD.

Close to the path’s end is the formidable Foeldrygarn Iron Age fortress (around 350 BC) with its double ramparts and ditches. High and dominant,1200ft up, it is on the site of three Bronze Age burial cairns. Look for a large flat stone, Bwrdd y Brenin (King’s Table ). But you may search in vain for the pot of gold said to be hidden there.

Just below it is Carn Meini, its bluestone rock eroded into jagged shapes. For many years it was believed that the bluestones in the inner circle at Stonehenge were quarried here. Then, in 2013, new research was published suggesting that the particular stones might in fact come from another location in the Preselis, nearby Carn Goedog.

Scientists made another, intriguing, Stonehenge-related discovery in 2013. They found that as many as one in five of the stones scattered across these mountains give off metallic sounds like bells, gongs and tin drums when tapped with small, handheld hammer stones. This ringing quality is replicated in the same bluestones at Stonehenge. It raises the intriguing possibility that they were chosen for some kind of ritual musical purpose.

If you take the Golden Road from east to west, (or came by car), and need refreshment, I recommend an excellent place to end your visit. The Tafarn Sinc (Zinc Tavern) in the nearby village of Rosebush, has a wood-burning stove, and its own brew, Cwrw Sinc. Rosebush was the centre of a once-thriving slate quarrying industry in the Preselis. Craftsman still make items from Welsh slate in a workshop at nearby Llangolman.

You need to get to and from Clarbeston Road. It takes 24 minutes (5 stops) by bus, but there is only one bus a day, and only on Tuesdays. Trains calling at Clarbeston Road continue to Carmarthen, with connections to East Wales, Birmingham,. Manchester and London. You could take a taxi.

A link to a more recent of my pieces on Pembrokeshire.