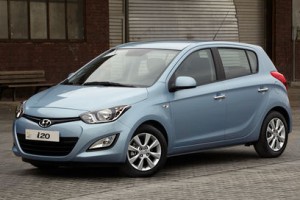 Hyundai i20 CRDi Blue – most efficient non-electric, non-hybrid car on the market. For now.

What makes the new Hyundai i20 CRDi Blue so special, and why should you care? And what is it about the Volvo V40 D2 ES that marks it apart from many other well-appointed, comfortable cars? Does it even matter?

In the week of the Rio+20 conference, where the world is likely, once again, to fall short of the decisive commitment to urgent measures to significantly slow climate change, these cars are, at least symbolically, very important.

In themselves, consumng petrol or diesel, and emitting CO2 and the usual cocktail of harmful street-level exhaust emissions, they are still part of the problem, burning excessive amounts of fossil fuels, and solving nothing. But they are also a mark of the progress the car industry can make, when it is set emission reduction targets.

Both cars (along with a growing list of several dozen others, powered by petrol and diesel) are already inside the emissions limits the EU has set for 2015. The Hyundai i20 has the, probably temporary, distinction of being the most economical conventional (not hybrid or electric) petrol or diesel-driven car you can buy in the UK. Its emits 84g/km of CO2, and returns an admirable 88.3mpg. It is on sale for £11,795.

It would be so much better for the planet and the people who have to breathe in, and potentially be poisoned by, traffic fumes, if people only drove electric or hydrogen powered cars. However that is quite a long way off. People will continue to drive petrol cars for the foreseeable future. So as the number of cars rise, particularly as European countries come out of recession, they must be made progressively more energy-efficient.

The transport sector, including cars, represents about a quarter of global CO2 emissions. Cars are the single biggest consumer of oil in the EU. The European Environment Agency estimates that cars are responsible for 14% of the EU’s total CO2 emissions.

Left to itself, the industry was moving too slowly to drive down emissions in a way that made any real difference. It’s worth noting that it took the EU, widely dismissed in the British press as worthless or at best obstructively bureaucratic, to speed things up. In 2008 it set legally-binding CO2 standards for the first time, regulating new car emissions. Cars sold in Europe in 2015 should emit 130 grammes of CO2 per kilometre on average; by 2020 that figure should have dropped to 95 grammes.

The industry had fallen far short of this in its voluntary action. Before legally-binding standards, between 2000 and 2007, emissions of the average new car dropped by just 1.2% per year. Since legislation was announced in 2007 (it was formally agreed in 2009), the rate of progress was 4% per year, on average. Some manufacturers have already exceeded the 2015 target.

Cars are certainly cleaner. A new car bought in the UK is now 18% more energy-efficient than the average car in use. Average CO2 emissions for new cars sold in the UK in 2011 were 138.1g per km, a near 31% decline since 1997. Cars producing less than 100g/km of CO2 accounted for 3.4% of the new sales, nearly twice the number of low emission cars sold in 2010, and four times more than in 2009. (This figure included hybrids and a small number of zero emission electric cars.)

Volvo, for example, already offers three cars – the C30, S40 and V50 with emissions at less than 100g/km. Its new V60 Plug-in Hybrid, due to launch later in 2012, will generate just 49g/km, the lowest CO2 output of any internal combustion-engined car currently for sale in the UK. It aims to reduce its average CO2 emissions across the range to 95g/km by 2020.

Last week (June 2012) environment website BusinessGreen revealed that the European Union is considering setting a target of 95g of CO2 per km for new cars from 2020. Some campaigners have called the proposed standards “insufficiently ambitious”, pointing out that with many car firms having already attained the 2015 standard, a greater cut should be achievable by 2020.

Greg Archer, programme manager at campaign group Transport and Environment (T&E), said an 80g/km target would save consumers an additional €150 a year in fuel, on top of the projected €500 saving from meeting the 95g target, adding that setting a goal of 60g/km by 2025 would keep the pressure on manufacturers to move to low-carbon transport

“Last time the EU set a CO2 standard for new vehicles, carmakers whined that cars would become unaffordable.  That didn’t happen, car prices came down in real terms and consumers have benefited considerably from improved fuel efficiency.  There is no doubt that legislation provides a massive boost to innovation, and costs fall over time.  The EU should be bolder this time around.”