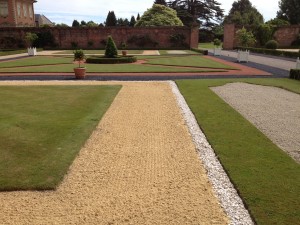 After the screaming motorcades, and  clattering presidential helicopters it will be time for touristic payback to Newport and Monmouthshire. The international media spotlight moves on, but the world will certainly have heard of the Celtic Manor resort, base for the NATO Summit, and the beautiful countryside around.

I was there in quieter times, before the security shield descended, and found lots to do in this often overlooked corner of SE Wales. New attractions include a 21st Century bird reserve, some of Britain’s best Roman remains, one of Britain’s earliest tourist traps and the National Trust’s latest stately homes.

Wales begins, gorgeous and green, shortly after the Severn Bridge. Yet this is the part many people still hurry on through down the M4, thinking the best bits are yet to come.

If only sat navs had a “worth quite a long detour” setting, as you used to find in some of the old tourist guides.

The secret of Monmouthshire’s scenery was blown during the Ryder Cup in 2010, when the cameras dwelt long and lovingly on picture-book wooded hills stretching dreamily away, serene valleys and the sparkling (when the sun came out) Bristol Channel beyond.

Are you nearly there? Yes, when you reach the Celtic Manor, that huge, imposing stronghold of a hotel on a clifftop, facing down the M$, and a fitting setting for the NATO Summit. It’s the entry point for the area the tourist board neatly package as the Wye Valley and Vale of Usk, although I think “Ancient kingdom of Gwent” would sell just as well.

For maximum serenity, and famous writer endorsement, nothing here beats the romantic ruins of Tintern Abbey, a few miles north on the edge of the Wye. Some of the earliest tourists were drawn to the 12th century Cistercian abbey, abandoned in 1536. Jane Austen included an engraving of it in her description of Fanny Price’s sitting room in Mansfield Park. Turner painted the ruins. Wordsworth  was inspired to write “Lines Composed a Few Miles above Tintern Abbey”. Tennyson wrote “Tears, Idle Tears” after a visit.

There are more formidable ruins a few miles west, at Caerleon. Set aside half a day for this well-preserved wonder, the remains of one of only three legionary fortresses in Roman Britain. The big features are the most complete amphitheatre in Britain, the fortress baths, the only remains of a Roman legionary barracks on view in Europe, and the powerful fortress wall.

Close by is the RSPB’s remarkable Newport Wetlands bird reserve, created from scratch in 2000 as a  “lifeboat”  for birds displaced when the Cardiff Bay Barrage  was built in the 1990s. They used to dump pulverised power station ash here. Nature – that’s bearded tits, avocets and marsh harriers, over-wintering waterfowl and waders – has a firm foothold in its watery corners and among the 40,000 reeds planted by volunteers.

I was a guest of the Celtic Manor. A proud Welsh dragon greets you in the vast atrium, planted with real trees. There’s an unfussy comfort, rather than luxury, inside. I was impressed with the affable and obliging  staff.

People go for the abundant golf, the spas and swimming pools, although there is plenty to do besides golf. The hotel kindly gave me a bicycle to tour the enormous grounds. I followed little tracks weaving between the courses, as buzzards circled overhead. Beyond the hotel there’s a network of trails (between 5 and 15 miles long) for off-road cyclists, walkers and horse riders around Tintern and the Lower Wye Valley.

In the towns among the valleys ands hills beyond, Abergavenny, Caerleon, Caldicot, Chepstow, Monmouth, Raglan, Tintern and Usk, traders promote products under the “Made in Monmouthshire” marque – “made locally from sustainable resources, in an environmentally responsible way”. Local restaurants and cafes bask in Monmouthshire’s success in being named the first “food tourism destination” in Wales.

Tredegar House, set in 90 acres of ravishing formal gardens and parkland, is one of the great mansions of Wales. The National Trust is now running the 17th-century property, on behalf of owners Newport Council, and have made it one the most attractive big house visits on the M4 (just off junction 28). I took a stately stroll through the perfectly-manicured gardens, which the trust is restoring, followed by a saunter through the many fine rooms where generations of the Morgan family lived and entertained. You are certain to linger at a painting depicting Godfrey Morgan on his horse Sir Briggs leading the Charge of the Light Brigade. There’s the usual bonus at the end of the visit, the National Trust cafe.

if you need some heavy retail therapy, Newport is just down the road, and Cardiff, with its new city centre shopping area is only 17 miles further on.

I was a guest of Celtic Manor www.celtic-manor.com.