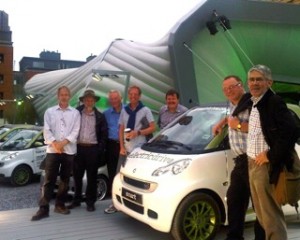 A ban on selling new petrol, diesel or hybrid cars in the UK will be brought forward from 2040 to 2035 at the latest, under government plans.

It’s been a slow start for the small electric city car. I wrote the following piece in 2011, in that optimistic pre-Olympics age. In the end, it was the London taxi that won the green mantle, and that happened as a result of clean air regulations.

But now the fully electric Smart car is ready to take hold. The Electric Smart EQ Fortwo and ForFour went on sale in January 2020, costing from £16,850 including the Plug-in Car Grant.

They will have a range of around 70 miles, taking a 10-80% charge in less than 40 minutes using a rapid charger. Prices start at £16,850 for the Fortwo Coupé (includes the plug-in car grant).

A stealthy convoy of cars hit the streets of Bankside in London at about 6 pm last Saturday.

We were seven men from a village share club on our annual day out in the capital taking a test drive, gripping steering wheels in rapt concentration as we swung round the Imax roundabout and headed north across Waterloo bridge.

Go on, make the easy assumption that this was a group of middle-aged petrol heads growling off into the Waterloo sunset in supercharged gas-guzzlers, indulging the standard male Top Gear fantasy, and heedless for the planet. But you would be wrong.

We were sampling a sawn off and silent urban car of the future, a vehicle so modestly powered and unassuming its very name is lower case,  the electric smart fortwo.

Pedestrians in London don’t look up for anything less than a royal carriage these days, so few would have noted the incongruity of the scene. This parade of sub-seniors was being guided from the passenger seat by young ladies (and a token man) young enough to be their daughters, in cars whispering past like a sackful of feathers before turning into the inner folds of London.

We had shown up at the smart urban stage in the Doon St car park behind the National Theatre for the Future Minds Exhibition – “showcase of ideas and innovation for a sustainable and positive future for our cities” – expecting to tweak some levers and kick a few tyres. Instead we found a team of eager exhibiting staff and more available smart cars than we could immediately count.

“Would you like a test drive?” Do small boys turn down the chance to tour a sweet shop? Licences scrutinized and forms filled in, we were off in that unlikely convoy nobody seemed to notice.

The smart fortwo is an existing model, converted into an electric venhicle (EV) – due to be launched in 2012 – and its nimble ways  are well known. Soon our guides had us burrowing into by-ways only the cabbies know, to emerge in those secret areas where the Savoy kitchen porters go for a smoke. Like a happy ending in a western, we all made it through Indian County just off the Strand and struck back over Waterloo Bridge.

We had one more series of tight bends to negotiate, before we turned into a warehouse on Upper Ground. One by one we inched onto a turntable for an bit of self-regarding. We were each revolved a complete circuit inside a ring of mirrors to see ourselves as those non-observing pedestrians would have seen us, if they had bothered to look. Then as if to prove how quiet this car is, a little later one heedless youth almost stepped into my silent path.

After all that investment of time and man and ladypower, I’m sure Mercedes (who make the Smart) will like to know what we thought. I found the car a delight to drive, with a surprisingly robust feel to it. But so simple. You press the accelerator and you go. Press some more and you go faster. No gears, no gear stick, and a potential range of 84 miles between charges  – but do remember to disconnect the  cable connecting you to the charger.

I’m easily converted to the electric cause, so what did the others think? A mainly positive reaction. One of our number was concerned about price. But another was impressed by the £236 energy costs his guide had told him – a saving of £850 per year. He liked the idea, too, of paying no road tax, free parking and not paying the congestion charge in London. Nobody mentioned range anxiety.

For further proof of that, we promised to hit them for another test drive at the official launch next year.