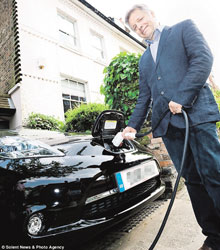 Goodier confirms he runs his car on solar power

Disc jockey Mark Goodier  was the first person in Britain to buy a Nissan LEAF, in March 2011

He drives his electric car (EV) mainly between his home and his work in London,  clocking up about 20 miles a day, and charging it once or twice a week.

He has solar panels fitted to his house, which effectively means he can charge the LEAF for free.

He said this, in an interview with www.thechargingpoint.com

“But, as I’ve already said, we only charge the LEAF twice a week and the TH!NK  [another electric car]  twice a week, so we’re producing way more electricity off the roof across the year, on average, than we need for the vehicles. So what we’re also doing is running the washing machines during the day rather than at night and shifting the use of our heavy electricity usage gadgets to when we’re generating. That [way] we’re not drawing as much off the grid. So all the way round, we’re winning.

“And when you add in the feed-in tariff [where excess energy can be sold back to the grid] it’ll probably be worth about £1,200 per year for 24 years, which means your break-even is in eight years. But during th e summer the solar is probably going to mean we reduce our energy from the grid by 30%. So financially, you’re mad not to do it, really.”