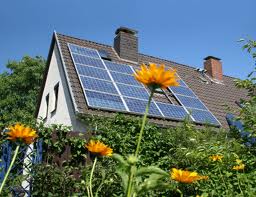 Here’s a man who is outrageously optimistic about solar power.

You may think he’s being hopelessly positive, naive even, but read this.

Most of futurist Ray Kurzweil’s apparently accurate  predictions  come from his law of accelerating returns.  According to him there’s an exponential progress in information technology.  Advances feed on themselves,  to help create the next faster, better and cheaper product .

We see  that in computers and mobile phones.  Now he’s applying it to solar solar power. He believes that solar energy technology is improving  so fast, it will soon compete with fossil fuels.  (He didn’t mention that China is already the leading producer of solar panels. ) Lauren Feeney of www.grist.org interviewed Kurzweil  recently and recorded this from the futurologist.

“One of my primary theses is that information technologies grow exponentially in capability and power and bandwidth and so on. If you buy an iPhone today, it’s twice as good as two years ago for half the cost.

“Today, solar is still more expensive than fossil fuels, and in most situations it needs subsidies, but the costs are coming down rapidly — we are only a few years away from parity. And then it’s going to keep coming down, and people will be gravitating towards solar, even if they don’t care at all about the environment, because of the economics.

“So right now it’s at half a percent of the world’s energy. But doubling every two years means it’s only eight more doublings before it meets a 100 percent of the world’s energy needs. So that’s 16 years. We will increase our use of electricity during that period, so add another couple of doublings: in 20 years we’ll be meeting all of our energy needs with solar, based on this trend which has already been underway for 20 years.” (Full article here.)

So do we check back in 20  years and see if he is right?   Or do we get in there now and make ourselves self-sufficient in solar panels?