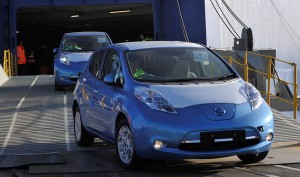 When did an argosy laden with rare goods from distant parts last make the news in this country? You’d have to go back a long way.

The city of St Petersburg may not have been quite up to the pedigree of Masefield’s Quinquireme of Nineveh from distant Ophir, bearing ivory,peacocks, sandalwood and cedarwood.

But it was a big improvement on  more traditional prosaic imports, today’s equivalent of the dirty British coasters’s road-rails, pig-lead, iron-ware, and cheap tin trays.

The vessel berthed at the Port of Tyne this week with the inaugural consignment from Japan of  67 Nissan Leaf electric cars, quite enough to formally launch a new age of electric vehicle (EV) driving in this country,  after  110 years  of dominance  by the internal combustion engine.  (Yes, we’ve already had the  Indian G-Wizz,  but the take-up was tiny.)

The first owners will drive them silently  off the garage forecourt in March (2011).   By 2013 the Nissan Leaf will be produced on British soil,  in a factory in the north-east of England. But before then we  will have come to, and perhaps successfully passed, the hard part.

All the following questions  will be be put,  and the answers will be much easily  interpreted as the number of electric cars builds up:

Will the batteries deliver disappointingly well under under the promised 100 miles or so?

Will battery life be reduced when owners charge them from the fast chargers in public places, always assuming they can find them in the first place?

And will the conventional petrol or diesel driven car prevail, at least over the next few years, as people realise that new high mileage (and considerably cheaper) conventional cars really do produce less CO2 than electric cars that take their energy from carbon-heavy conventional power stations?

All that’s to come. For the moment that image of the first Nissan Leaf driving silently off the  City of St Petersburg comes supercharged with optimism for a cleaner future.