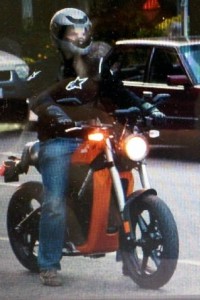 Until recently the USA has lagged behind the Far East and even Europe in the development of low or zero energy vehicles.  But the near terminal decline of the automotive giants in Detroit in recent years has concentrated minds.

This summer two employees of Brammo, the electric motorcycle firm, symbolically recreated the trip from Detroit to the White House which auto CEOs made by private jets were they sought a bail out 2009.

Wearing old-fashioned helmets and jackets that would have impressed Indian Jones, they purred non-pollutingly into DC on small, modestly-powered electric motorbikes, the Enertia, designed and built by Brammo, based in Ashland, Oregon. It cost the riders about $4 each in energy costs.

The Enertia is said to be the USA’s first all-electric, plug-in motorcycle. It is powered by a lithium-phosphate battery, and can fully charge in three hours. It gets up to 45 miles per charge, with a top speed of 60 mph, fit for urban or suburban commuters who travel less than 40 miles daily. It only has one gear, a feature intended to appeal to beginner motorcyclists.

To cut costs, some of the Enertia’s parts come from non-traditional sources: the panels are made from recycled plastic bottles, and the fender from old car battery casings.

Retracing the CEOs’ cap-in-hand route to Washington, Brammo employees Dave Schiff and Brian Wismann relied on social media to get their message out, and the kindness of strangers to find an overnight stay. The riders made many converts on their admittedly slow passage, punctuated with many stops to recharge the machines.

It was a scenario fit for the West Wing, and just as you would have expected Josh and CJ to pick up the plot and respond favourably, so did the 0bama administration. Energy Secretary Secretary Stephen Chu granted Brammo CEO Craig Bramscher an audience.

Enertia is one of 3 U.S.-manufactured electric motorcycles currently catching the eye of an increasingly interested media across the water.

The Zero S, Brammo Enertia and Native S models, made by small startups, could play a significant role in changing the collective American mind on low emission driving. Zero and Brammo are the product of big venture capital budgets. Native is an off-shoot of Electric Motorsports.  Their models sell for under $10,000, are almost as environmentally friendly as a bicycle, and nearly as quiet. Will they do for urban transport, what Google and Apple have done for the tech sector?

They come with a lot of computing power, but lack many of the complex moving components of a traditional internal combustion engine, reducing the risk of things going wrong.

The e-bikes’ battery systems account for about one third of their weight and 30-40% of their purchase price.

Motorcycle.com tested the machines and found them “light, and unintimidating – for the most part.” it concluded: “As short-range runabouts, these machines offer reasonable utility and a fair degree of sophistication.”

The Zero and Brammo offer on-road energy data displays, which include showing the charge of the battery.

“The Enertia feels solid and well-engineered,” one writer comments. “It’s what I imagine Honda might’ve built if it had taken the plunge as early as Brammo.”

“At this juncture at the dawn of the proposed EV revolution, our e-bike pick of the day is the Brammo Enertia.”

And there’s an an upgrade arriving soon.

Brammo’s founder Craig Bramscher announced this summer (2010) that its “game changing” 100 mph-plus “Empulse” will be “revolutionary.”

Due to be delivered during the first quarter of 2011, it will come in three versions with, respectively, 60, 80 and 100 mile range on a single battery charge.