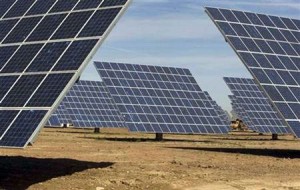 Full up rubbish dumps could be covered over with solar farms, as as an extreme greening of the environment option.

You may have seen these beguiling but useless green mounds: a previously rough area caringly restored to nature, perhaps? But look closer and there’s something very wrong. The clue is the pipes and gadgets siphoning, and sometimes, burning off the methane that keep building up underground.

The authorities can’t even plant trees, because roots would damage the  liners, under a layer of soil and grass, which cover over an obnoxious casserole of putrefying garbage thrown in there over decades.

Nothing much has been done with these ubiquitous former household waste tips, a permanent rebuke to our throwaway society, except from  extracting the methane. But now the renewable energy sector has come up with an attractive, and possibly lucrative, use.

Solar energy company Southern Sky Renewable Energy proposes siting 24,000 solar panels on a landfill in the town of Canton, Massachusetts, USA, capped 25 years ago. It would produce  5.6 megawatts of clean electricity. The project could generate up $70 million for the town through new revenues and energy savings.

Western Massachusetts Electric plans a 17,000 solar panel project on 62 acres of covered over landfill, to produce 4.2 megawatts solar power. Fairhaven officials are working with New Jersey-based Blue Sky Power to install a smaller array of panels on their old landfill.

Another US company  PV Navigator  is looking to develop plants on former landfill sites in the Los Angeles area. Axio Power is working on solar projects on landfills or brownfields in California and Hawaii. One of its first projects was on a landfill in Colorado.

Capped landfills could  turn out to be prime locations for solar panels because they tend to be raised and can’t be built on. But the solar boom on degraded land shouldn’t stop there. There is the prospect of putting solar farms on abandoned industrial sites where the soil is still too toxic for other development.