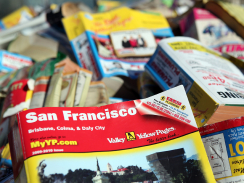 More news this week that the digital revolution is  fundamentally changing the way we buy books, with Amazon reporting that sales of its e-books are now far outstripping those of hardbacks.

So isn’t it inevitable that other ways of imparting words and information in paper form are going to decline too, and move to electronic media?  Those  increasingly unnecessary Yellow Pages, that  still  seem to bounce onto my  doormat much too often, for example?

This week, too,  saw news that  advertisers are leaving the print version of Yellow Pages, and migrating to the Internet.  While  from West Coast of the US,  so often the launchpad for green initiatives, comes news that  the directory will be outlawed altogether  unless people specifically  request it.

San Francisco is to ban the delivery of Yellow Pages, joining Seattle and other cities pledged to reduce unwanted directories.

The city approved an ordinance creating a three-year pilot programme which will limit delivery only to customers who are at home and willingly accept them, or who have previously approved delivery.

San Francisco sees the over-distribution of telephone directories as a big waste of natural resources. It costs the city $1m  in disposal through its refuse system.

The announcement came in the same week as  Yellow Pages publisher  Yell  reported that revenues from its print editions fell more than 18% year on year in the 12 months to 31 March. UK earnings plunged almost a third.

Yell, which operates in the UK, US, Spain and Latin America, reported that the number of print advertisers was down more than 9% in the period. Global print revenues – which account for 70% total income – fell 18.2% year on year to £1.3bn.

Adding further weight to the theory that the future of directories is online, there was a continuing increase in digital revenues, up 9.4% year on year to £457m. Digital now accounts for just under of a quarter of total revenue.