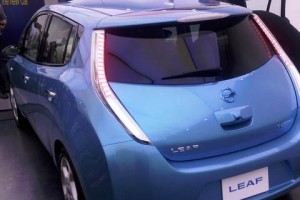 Carlos Ghosn, CEO of carmakers Renault and Nissan, which this week announced the formal launch of the all electric Leaf,  today  (December 9, 2010) described the electric car as the breakthrough that will bring the motor vehicle into the modern age.

He accused the automobile industry  of failing to innovate for several decades past. Giving  a keynote  address at the LeWeb conference in Paris, Ghosn said cars had stopped being perceived as  “symbols of modernity.”

In Japan, for example,  cars rank  only 17th in interest among consumers, easily beaten by cellphones, computers and video games.

This was because the auto undustry had decided to focus on optimization over innovation.  He said optimization was all about reducing risk, while innovation was about increasing it, in order to achieve the breakthrough needed to push a business to the next level.

Ghosn claimed that there have been no real breakthroughs in the auto industry in the past few decades. And what about hybrids?.  Not a breakthrough, but an optimization, he said.

While the automobile has stagnated, the world has dramatically changed, he went on. Serious action now had to be taken to avert an environmental catastrophe,  to which cars have contributed.

In addition the rising price of oil provided a pressing need to rethink the machines that 1 billion people in the world drive every day.

Ghosn, and Nissan, are  taking a big gamble on the electric car. Ghosn noted the high level of scepticism about electric cars in general, especially over their range and safety concerns over batteries.

But he believes innovation is what will reconstruct the future, and the electric car is the innovation that the industry needs to reclaim its modernity.