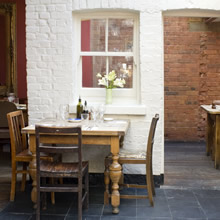 Any pub called the Duke of Cambridge will have been basking in fame-by-association since Royal Wedding Day.

They will be picking up trade from casual, impulse visitors as long as the rosy glow of that glittering occasion lasts. But what if the namesake pub already has a menu to boast about? Carrying the new title of the second in line to the throne will add significantly to recall. “Now what was the name of that really good fish restaurant? Ah yes, the Duke of Cambridge.”

www.fish2fork.com has given the Islington gastropub a four and a half Blue Fish rating, putting it on a par with the best in the country. 4 Blue Fish means “an excellent restaurant which does its best to follow all the rules on sustainability. Eat here and enjoy without worrying about damaging fish stocks.”

Fish2fork notes that the wild fish on the Duke of Cambridge’s menu, sourced mainly from day boats on the south coast, are caught by the least damaging capture methods such as line, pot and creel. The pub puts information about the fish on offer on a blackboard, and the menu states the area and method of capture of all its fish. Farmed fish comes from local Soil Association-certified organic farms.

The Duke says this on the Fish2fork web site: “From day one sustainable fish sourcing was an essential part of our philosophy. In 2001 we became the first restaurant in the UK to have our fish policy approved by the Marine Conservation Society and have always adhered to their fish to buy list.  We have only ever bought sustainable fish.”

Fish2fork notes: “The Duke has prided itself on its ethical policies since opening in 1998. It has won several awards for its food and its ethical approach to eating.

“All ingredients, are organic with Fairtrade products used where possible.  The gastropub attempts to keep as low a carbon footprint as possible and gets electricity from renewable sources. Among its aims are to get ingredients from as close to source as possible, with 80 per cent coming from the Home Counties – and it boasts it never, ever airfreights anything.”

“We have only ever bought sustainable fish,” says the Duke. “There really is no excuse for any restaurant to do otherwise.  We have an extremely strict buying policy – we never buy endangered species or fish in its breeding season. The fishermen we work with come from small fishing communities on the South and South East coasts, and they only use sustainable methods of landing their catch from day boats.”

The Duke prepares all its food on the premises, serving “hearty, rustic British food with Mediterranean influences.”

Fish2fork say “If all restaurants adopted the policies and approach of Geetie Singh, the owner and founder of the gastropub, fish stocks would be much healthier.”