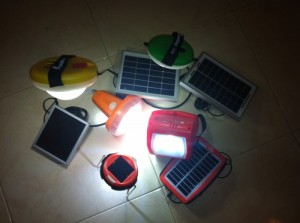 One big joint social and environmental problem in the world can be solved relatively easily.

I don’t mean solved in the sense of: “Oh, here is a really good idea that might just come off a few years from now if enough governments and people support it, and we are prepared to spend millions.”

The challenge is replacing those dreadful and ubiquitous Kerosene lamps all across Africa with clean, inexpensive solar-powered lamps. The charity SolarAid is meeting it, has sold more than half a million lamps and can show that it is improving people’s lives and, most crucially of all, children’s education prospects.

I wrote about this recently (link here) and I’m happy to return to the subject. Since then SolarAid, one of the principal organizations introducing solar lamps to Africa, has won two glittering prizes.

First, it received the Ashden International Gold Award for its work in bringing solar lights to students in rural Africa; “By working with schools to get study lanterns to families it is helping give a generation of African schoolchildren the chance of a better future.”

The second award brought SolarAid international distinction. In June (2013) it collected £500,000 for winning the Global Impact Award, part of Google’s Global Impact Challenge. The award will help the UK-based charity distribute 144,000 solar lights across rural Tanzania, as well as create jobs for over 400 solar entrepreneurs.

In May (2013), SolarAid announced the sale of its 500,000th solar powered lamp. Why sold, rather than given away? SolarAid believes this business model is essential for the creation of a sustainable market for solar lights. The distribution company SunnyMoney, owned by SolarAid, runs as a business with the social goal of increasing access to solar lights and reducing reliance on Kerosene lamps. All income generated by the sale of the lights is invested in its work.

Kerosene lamps should have been outlawed years ago. They are filthy and unpleasant. They make people cough. They emit black carbon that absorbs light, heating the atmosphere and contributing to global warming.

They are expensive to fuel (SolarAid say they take 20% of some households’ income). Children have to do their homework by their indifferent light, and stop when they run out of fuel. And yet, across much of Africa (and other parts of the developing world) people have no option but to use them. In sub-Sahara Africa only 14.2% of families have access to mains electricity. There are 598 million off-grid Africans

The solar lamps start at about $10. They give light for about four hours, and the SolarAid team have many reports of children doing more homework as a result of the better, longer light. They estimate that over a million children are now able to study at night without inhaling Kerosene fumes.

SolarAid has set itself the challenge of eliminating the Kerosene lamp in Africa by 2020. Its operation is speeding up. It the past six months it sold more solar lamps in Africa than it did in the previous six years.

Solar lights sold through SunnyMoney are high-quality and come a range of “reputable and ethical suppliers”. The current generation of lights last for at least five years. In Tanzania, for example, a basic study light costs about 2% of the amount it would to fuel a Kerosene lamp over the same period.

The charity says the new lights pay for themselves after 12 weeks. Solar lights increase people’s income by an average of 20% per month and create the conditions for better health and provide a platform for people to develop and prosper.

People make easy claims for all sorts of products and innovations, and some of them can be measured, in terms of energy saved or bills reduced. Kat Harrison, Social Impact and Research Manager for SolarAid, is reporting back, in a blog, from villages she visits.

On Mafia Island in Tanzania SunnyMoney tried the approach of showcasing the lights to groups of headmasters, who would in turn influence teachers, who passed on their knowledge to their pupils, who would then go home and tell their parents. Kat reports: “In a short space of time we secured an amazing 40% household penetration. This became the standard distribution model enabling us to reach that elusive ‘last mile’.”

Nine out of 10 of those questioned said they spent less on Kerosene now. Nearly three-quarters had noticed a difference in the health of household members.

“The family has been able to enjoy clean air with no smoke” – Hamidu Abdalah.

“We have been able to save a lot of money, and have been enjoying the reliable light” – Nuia Omary.

In another part of Kenya Kat spoke to farmer John Kuriuki. His children used to use Kerosene lamps to see while they studied at home; now they study for four hours rather than three a night, thanks to their solar light.

John said: “They are reading in a friendly environment free from toxic [fumes] and they don’t complain of eye irritations, so they study for long. They don’t cough now; they are safe and study well.”

John’s family now don’t buy Kerosene, and save themselves 300 Kenyan Shillings a week – that’s about £110 a year and is nearly 10% of John’s income.

Kat and her team note that in Uasin Gishu, Kenya, over 80% of those interviewed have no access to electricity or a regular income, with some spending up to 40% of what they do earn on Kerosene just for lighting.

It’s too soon to say categorically that children using solar lamps are performing better than similar children still stuck with Kerosene, but teachers are certainly noticing that the children in villages with solar lamps seem to be more attentive, hard-working and enthusiastic.

Can SolarAid achieve its 2020 target? On a 1 to 10 scale of difficulty you might put the world’s chances of drawing up an agreement to make meaningful CO2 reductions at the big UN conference in 2015 as a 10. Yes, that’s hard.

Ditching Kerosene is easy. Let’s just make it a one out of ten, and give SolarAid, Kat and her colleagues and the other organizations involved in this admirable project all the support and help we can.