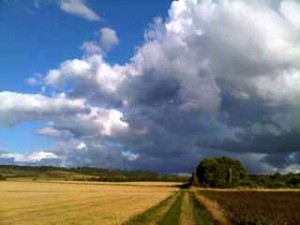 Simple measures could bring the birds back to farmland

Walking on a footpath near my home last weekend, I came across something I haven’t seen in that field before. A low cost avian “lifebelt”.

All the farmer had done was not plough a 10 metre strip down the side of the field, reducing his yield by a few percent. But the benefit to nature is considerable. It means more  birds, and more fast hunting predators such as barn owls  zeroing silently in on the sacrificial  songbirds.

It’s one of the easy eco-solutions, very low down the scale of difficulty, with  slowing global warming and  saving the blue tuna at the top. And it’s not even new–the idea of leaving field margins has been around since the 1970s,  although farmers have been slow to take it up  voluntarily.

Instead farmland conservation has been dominated by set-aside,  with big EU funded rewards for doing nothing to a field.  It wasn’t difficult to spot whole fields blasted with a chemical so they resemble a  Vietnam war battlefield with added napalm.   However many initiatives did have an incidental positive effect.

Then in 2007 the European commission announced that it would suspend the 20-year set-aside programme for the 2008 harvest year, so that farmers could grow more grain and offset poor harvests and soaring food prices. That was pretty  much the end  of the policy.

In 2009 the Guardian newspaper published a letter signed by all the main wildlife conservation bodies noting: “Although not designed to do so, the EU’s now defunct set-aside policy created habitats for wild flowers, insects, mammals and birds, and helped to keep agricultural pollutants out of our waterways.”  They called for a new scheme “which would require farmers to manage a small percentage of their land for the environment in return for their subsidy.”

Next came the launch of  the  Campaign for the  Farmed  Environment,  by farmers and farmers and conservationists, with government backing, to try and ensure the benefits of set aside  were maintained.   The scheme promotes relatively simple measures,  including leaving stubble over the winter, rather than ploughing the fields so seeds are available;  and leaving margins around fields planted with wild flowers so the buntings have somewhere to feed and nest. Farmers can be paid to introduce such measures as part of environmental subsidies under the Common Agricultural Policy (CAP).

I’ve no idea if the field I saw with the wide margin was part of this new  program,  but whoever is paying–EU or UK government– it’s likely to be good  for wildlife.

She wants to  encourage farmers to adopt three measures provide nesting habitat and summer and winter food  for farmland birds.  That means: 2 hectares of wild bird cover, with a special crop of seed rich species to help birds in winter ;

2 hectares of fallow land in spring and summer for ground nesting birds;

and 3 hectares of insect rich habitats, which could be on the edges of fields.

Farmers could also provide tiny plots of land for skylarks; just two uncultivated plots of 4m by 5m per hectare would be enough for a thriving population.

Early figures look good.  3,000ha of habitat  has been created across Wessex for farmland birds.  On one farm in the Cotswolds, 5 pairs of  breeding corn buntings  were recorded in 2009 and 2010 where they have not bred before. All 5 pairs are using the three  types of habitat .

A recent study published in the Journal of Applied Ecology,  looking at 70 farms over six years, indicated that corn buntings increased by 5.6 per cent every year on estates where farmers took advice on improving wildlife habitat. An absence of environmental schemes led to numbers of corn buntings declining by 14.5 per cent a year.

Now the government is threatening action against farmers don’t do enough. Farmers will be forced to take part in the new environmental schemes unless they do more to help wildlife voluntarily,  farming minister Jim Paice has warned.

In an open letter to the farming industry, Mr Paice warned that if a forthcoming wildlife survey finds farmers are failing to boost species numbers, then the Government will bring in compulsory measures.