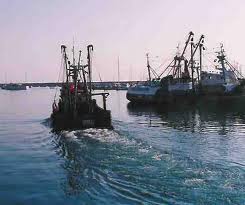 Fishing boats put out from Brixham

People are interested in, and concerned about, where the fish they buy in shops and supermarkets and in restaurants comes from. But retailers and restauranteurs are still not making it easy for them to make a considered choice between a fish whose stock is under threat, and species from a sustainable source.  Too many places tell you nothing at all.

There is still not enough information from supermarkets on the fish they sell, and even if it’s on the package it is often hard to interpret. And most restaurant menus  say nothing at all about where the fish comes from. (I’m still impressed by the restaurant in Vancouver I visited in  2009, which gave the name of the boat and the fishermen who caught the fish I was eating. And he was using a line, not a net.)

The topic of sustainable fish was given a big boost last year (2011) by Jamie Oliver in his series of Channel 4 short films on cooking by-catch species such as gurnard, coley and dab, and Hugh Fearnley-Whittingstall, with his TV-driven campaign Hugh’s Fish Fight. He is still lobbying to stop this serious waste of fish – for example half the fish caught in the North Sea are thrown back into the sea, dead — and  trying to persuade the public to change  their fish-eating habits.

I was intrigued last week to read a tweet from one of my local news providers promoting a fish stall on Saturdays in my local market town (Tring) –another example, incidentally, of Twitter delivering useful brief bullet point  information).

I e-mailed the people running the market stall and asked them where they stood on sourcing of fish and sustainability. We are very far from the sea, and have in the past been targeted by mobile fishmongers from East Coast ports selling otherwise very good fish of dubious provenance. I wanted to be sure this wasn’t the same thing.

Bren Mason replied the same day and his e-mail was encouraging. He told me he formed Rock and Sole with his friend Neil Burn-Tilbury, who was a day boat skipper in Brixham and latterly a fish trader “so knows the industry inside and out”.

Bren  work as a a section head for Meat and Fish for Waitrose [which has a good reputation on sustainable fish], so has experience at the “pointy end of the business”.

“Our products include by-catch anchovies, line caught Brixham white fish including haddock and cod and many sustainable fish such as dab, pollack and  “pot bait” red gurnard. We buy freedom RSPCA salmon as well as line caught maldive tuna. We offer a range of products such as cockles, whelks etc from reputable suppliers. As to your question of discards the volume that affects the industry largely comes from trawled long haul boats that we (with the exception of bad weather) don’t deal with.”

We hope to visit his stall, and report back. The signs are good; so is their attitude. I do hope they will be trying to educate customers about the need to conserve depleting stocks, and to have them sample less well-known fish that are still being routinely thrown back into the sea.