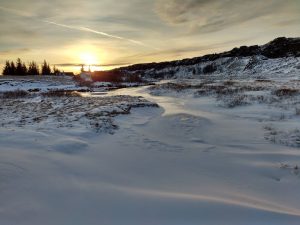 How are we to square our desire to travel to indulgent hotels next to distant exotic beaches, with the imperative to conserve the planet and to hold back climate change?

2017 was, as too easily predicted, the warmest year on record. The Arctic ice cap retreated alarmingly. The Great Barrier Reef suffered a serious episode of bleaching, which scientists link directly to warming waters caused by climate change.

Yet you won’t see troubled articles from travel writers in the New Year supplements on these subjects. You won’t find many destination pieces urging us to take the train as far as we can into Europe, as our contribution to reducing demand for a Third Runway at Heathrow.

There is very little overlap between travel articles – and let’s face it, most are travel or destination-promotion articles, because most travel writers, myself included, rely on airlines, hotels and tourist boards to host us because much foreign travel is beyond the budget of the regular freelance – and informed articles on the damage to the environment and the climate caused by travel, and the need for sustainable tourism.

Am I a hypocrite? I have accepted the generous support of airlines and hotels to facilitate my trips to Europe, to the Caribbean, to Africa, to North America. I feel awkward about this, but I justify my continuing international travel, in climate-unstabling aircraft, at least to myself, as a necessary form of research.

I now know, from going there, that the environment-protection Costa Rican tourism model is one I would happily recommend. The country has forests enough to offset the Co2 generated by my flight there, and tourist income helps the government preserve them and meet its green targets.

I also know, through my visits there, that other countries need to do much more to counter the damaging effects of tourism. Costa Rica has good schemes to protect turtles nesting on its beaches. So does Turkey. Some Caribbean islands need to do more. The distressing sequence in Planet Earth II of baby turtles heading inland towards siren lights was filmed in Barbados. I feel my visit to both places was valuable research, particularly as few others have made the comparison in print.

On the other hand, you don’t need to travel to Australia to grasp the seriousness of the problem at the Great Barrier Reef. Its survival depends on rapid and concerted international action to limit global temperature increases. I don’t need to see it, just as I do not need to see the melting Arctic to be persuaded of the need for action. And, without making a visit, I am fully convinced that the Galapagos could do with far fewer visitors, not more, if it is to preserve its unique environment.

Paradoxically, it was my non-trip to Bhutan last year – my visa didn’t come through in time – that prompted me to look online to see what I was missing. I now know that Bhutan has a serious plan to become carbon neutral before too long, and is promoting cycling as a serious alternative to driving, for visitors. It is just that if I had gone, I would have been better informed. So that’s a long haul flight I could have justified.

To travel, or not? You have to be concerned about the consequences if you are, as you surely must be, concerned about us meeting those 1.5C or, worst case, 2C targets which most world governments have pledged to meet after the 2014 Paris Agreement. And travel writers have a responsibility.

Just as motoring journalists ought to inform their readers about the benefits of electric cars, and make the pollution a model creates as much of a topic as acceleration and in-car comforts, so should travel writers, even though they are uniquely dependent on the holiday industry to facilitate their travel to far-flung destinations, cast light on the environmental costs of tourism.

The underlying tenet of travel writing is to introduce us to the wonders of the planet. Now it’s time for travel writers to link more closely to the factors that could degrade or even destroy those very wonders, the biggest of which is climate change.

We’re not going to rule out foreign travel, but perhaps we should seek to divert people from places with no firm plans to match welcoming more tourists with the greater protection of their environment.

So you may want to can support the countries, such as Costa Rica, with a coherent plan. You might want to read more deeply about, say, the Maldives, a superficially wonderful place to visit, which doesn’t.

There are many examples of “green” hotels, of restaurants and other tourist buildings largely powered by renewable energy, and, of course, towns and cities around the world with efficient public transport systems as an alternative to the car.

On the other hand the international aviation continues its significant contribution to climate change. While new airliners use less energy than their predecessors, there is no sign of the big breakthrough in fuel economy, the equivalent of the electric car in the sky. And the steady but modest reduction in CO2 output in aviation is being offset by increasing passenger numbers.

International tourism is a huge, valuable industry, providing jobs for millions. But it must face up to the environmental crises of our times. Travel writers can help it effect that change.