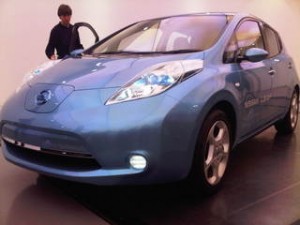 Nissan Leaf – will electric car sharing be next?

Nissan to launch shared-ownership cars.
Nissan has come up with a good marketing idea, and it doesn’t involve selling more cars.

If you live in the South East, although it could be any urban area these days, you will be familiar with streets clogged with parked cars, with house drives where there are three or more vehicles.

How much are they actually driven? What if you owned a car, parked somewhere close at hand, but someone else, who might be a complete stranger,  “owned” it  as well as you, and used it when you did not need it?

The car company calls this “the world’s first digitally powered shared car ownership scheme”. And, ambitiously, it is “set to transform the traditional car sharing industry”.

Nissan calls its programme NISSAN INTELLIGENT GET & GO MICRA, and bases it on the smartphone and social networking. It is rooted on an algorithm that uses social profiling, and profile matching, and something called geo-localisation technology. In essence it creates compatible groups of owners and matches them according to their driving needs.

The scheme launches initially in the Paris area,  and cars are expected on the road by April 2017. Owners will received personalised monthly invoices based on car usage.

Nissan CEO Carlos Ghosn said: “We are moving toward a future where car usage may be more flexible, social and shared.”

The car Nissan is using for the launch of the programme is the new Micra Acenta 0.9O MT, with Bose Personal Audio as an additional feature. The package will include insurance, servicing, the online matching tool, smartphone app and in-car technology. Between them owners have to limit the car’s use to an annual 15,000 km.

This is likely to be one of the more sophisticated examples of the
coming shared-economy model, although potential customers will have questions.

Would they all share, for example, cleaning costs, when some users, taking the children to and from football practise or slipping the dog into the back seat for example, ought to be contributing more?

And what happens if one particular driver is harder on the tyres, or scrapes the bodywork while parking, or puts the vehicle off the road altogether in a collision? How is the substitute car arranged? And why should the whole community take the hit of a loss in value after a bodywork repair?

And, of course, how is the vehicle made available to the next owner?

Nissan will have answers, and there is more detail to come out. But on the face of it, a bold and forward looking plan from the company that gave us the first purpose-built all-electric car.