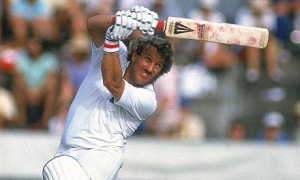 Ian Botham wields the willow in his famous Ashes series in 1981.

The summer’s test cricket programme is underway, and the purest form of the game, with the reassuring sponsorship of Waitrose, reasserts itself against those many upstart versions.

But whether they play test cricket or T20, cricketers turn to essential and traditional tools, the most important of which is the bat.

Older readers will recall the notorious, or comical, incident in a 1979 test match when Australian bowler Dennis Lilley tried, as a marketing stunt, to play with an aluminum bat. The laws of cricket were subsequently changed to insist that the blade of the bat must be made of wood.
It seems likely that, whatever other changes take place in the game, batsmen will continue to use, far into the future, a bat made of that most elemental of materials, a willow tree grown in about 15 years from nothing but good soil, water and sunlight.
Willow is chosen for the blade because it is tough, light and resilient. Cane, which is light and springy, is used for the handle.
Appropriately for the birthplace of the game, some of the best willow in the world is grown in England. There are many species of willow but few are suitable for cricket bats. Salix alba ‘Caerulea‘, one of the two main types of willow found in the UK, is perfect for the job. (The wood of the other, Salix babylonica, Weeping Willow, is too dense and heavy for cricket bat manufacture.)

Hodsock Priory in Nottinghamshire, close to the Trent Bridge ground where the 4th Ashes test match opens on August 6th, is one of the main suppliers of willow. It has produced around 300 English cricket bat willows since the 1990s, and serves one of the longest established suppliers of the wood.
The trees, which grow along the streams on the estate – cricket bat willows do best near fresh water –  are cut down when they mature, usually after 15 years. Each trunk contains wood for around 30 bats. Felling 40 trees a year, Hodsock contributes the wood for 1,200 bats a year. They are suitable for players from school level up to Test Match standard.
The estate has a rolling programme of replanting and harvesting every year in partnership with JS Wright & Sons, a family business based in Essex, and said to be the world’s largest and oldest company supplying finished English bat willow to bat manufacturers. To produce knot-free timber, shoots and buds must be rubbed off the trunk in early summer to a height of 3m. Salix alba, a single straight stem with attractive blue-green leaves, 10 to 11cm long and 1.5 to 2cm wide, is one of the fastest growing British trees, and ready for harvesting after 12-15 years, when it is about 120cm in circumference and 12m tall. The trunks are then sawn into 70cm lengths. Using wooden wedges, craftsmen split the lengths with the grain into sections called clefts – each cleft makes one cricket bat blade.

It’s a fully renewable industry. Each year about three times as many trees are planted as are cut down. J.S.Wright says there is no shortage of English willow in the market today, although it is always looking for new supplies. One promising new source of cricket bat willow is The Royal Forestry Society’s Battram Wood. The RFS bought 48 hectares (117 acres) of farmland in the new National Forest in Leicestershire in 1998, with the mission to create a “multi-benefit” woodland from scratch, involving local residents. One of the many uses will be growing cricket bat willows, ready to be harvested before too long.

Wrights produce thousands of blades a year, sending them to specialist manufacturers, including Gunn, Moore, Warsops and Salix Cricket Bats. The finished bats are sold all over the world, with the biggest market in India and Pakistan. Demand continues to grow.

The clear superiority of the English willow cricket bat was recently attested by Australian wicketkeeper Brad Haddin, when he met scientists from the Australian National University who are studying what makes English willow the best bat-making material in the world, compared to other wood, such as Kashmir willow. Project leader Dr Mohammad Saadatfar said the research, the first of its kind, involves examining cricket bat wood at micron scale, and comparing different species.

Haddin sampled both English and Kashmir willow bats, before concluding that the “power areas” were greater in the English willow bat. He said the “sweet spot” was small on a Kashmir bat compared to an English willow. English willow produced a superior bat.

However, there might be more to it than just the wood. Salix Cricket Bats @SalixBats noted in a tweet, “but really the wood is only a small part of it, it’s the skill of processing & making which makes the difference.”

My book on one of the greatest feats of hitting with any (willow) cricket bat –  Garfield Sobers in Swansea.