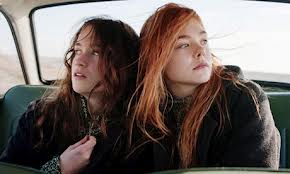 Two of the most compelling films in our cinemas at the moment are set against the backdrop of disasters – one that never happened exactly 50 years ago, and a hypothetical one about which we can’t be too sure.

The first, Rosa and Ginger, tells the story of two British teenagers at the time of the Cuban Missile Crisis in October 1962.

The second, Beasts of the Southern Wild, is set in a New Orleans of the perhaps not too distant future, when the ice caps have melted and the sea sweeps over the levees.

I’m not sure  Benh Zeitlin, the director of Beasts, had any intention that we should read this as a cautionary tale of the consequences of inaction in the face of the threat of global warming, still widely denied in the USA, any more than Sally Potter,  who made Rosa and Ginger, wants us to see her movie and deplore the nuclear arms race. Both are character-based films, rather than action stories, and the main characters in both have won plaudits for their performances.

Quvenzhane Wallis was just five years old when she auditioned for Beasts of the Southern Wild, and seven when filming ended. Some critics are even suggesting she may become the youngest ever Oscar nominee.

Reviewing Rosa and Ginger in the Guardian, Peter Bradshaw spoke of: “A lovely, open performance from 14-year-old Elle Fanning, playing a troubled British teenager … lifts this movie from Sally Potter.”

Maybe we can only draw half a parallel here. Potter told an interview about the nightmares she had about nuclear war during the missile crisis.

Anyone who was a teenager or older who lived through that week in October 1962 remember the terrible foreboding.

The second movie, Beasts, is only fiction, isn’t it? Although this New Orleans bears a more than passing resemblance to the New Orleans that was almost washed away by an unnaturally ferocious Hurricane Katrina six years ago. And after the most extensive melt season on record in the Arctic we do now face the very real prospect of the ice retreating altogether in the summer before very long.

How many of us have, if not nightmares, 4 AM moments of deep doubt about the future? (I assume the climate change deniers sleep blissfully on.)

Movies, particularly the apocalyptic ones, in the end are entertainment, and they do not tend to change the public’s, and still less the politicians’ minds. They are about a human drama played out against background  events which may or may not be true.

And yet Rosa and Ginger was set in the time of a disaster averted by politicians who kept their nerve. Would that we could say the same about the factors that create the scenario in Beasts when we watch it again on whatever our smart TVs have evolved into in 2052.