Her latest book Three Daughters of Eve is set in Oxford and Istanbul and focusses on three Muslim women, several men, and one big question. 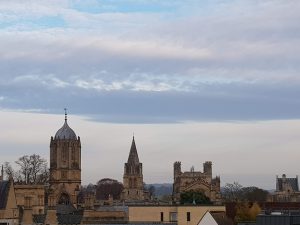 Two university cities, both equally celebrated. But one of them far outpaces the other as a setting for literature (most recently in the latest novel by Elif Şafak) and a base for writers. Why has Cambridge has so few books written about it, or set in it?

Or is it that Oxford is so far ahead of any other UK city, apart from London, I don’t think there is a place in the UK with more literary, film and broadcast media connections than Oxford.

“Oxford exerts a strong influence on those it touches,” says author Val McDermid, writing in The Guardian on the rich catalogue of fiction set in and around the university and other parts of the city. McDermid read English at St Hilda’s College.

So many books and  TV series have been set in Oxford, making it one of the most familiar provincial cities in Britain, even for people who have never visited. Its fine wide streets and noble buildings – even its pubs – have been the backdrop for countless TV programmes and films, from Morse and Lewis, through the Golden Compass and Brideshead Revisited to Harry Potter. Even Mama Mia 2 opened in Oxford.

In Three Daughters of Eve, the plot switches between Istanbul and Oxford, an appropriate place to bring certain key characters together in a confined, academic environment to debate the big philosophical question the book poses.

As for Cambridge, there are a number of good books. Decide for yourself how they compare with Oxford. Culture Trip website suggests The Versions of Us by Laura Barnett; Cloud Atlas by David Mitchell – with elements of the story set in Cambridge; Ariel, by Sylvia Plath – many of poems in this collection would have been written during her time studying at Cambridge University; Case Histories by Kate Atkinson; and A Brief History of Time by Stephen Hawking. This was not about Cambridge, but was written there by this man with a colossal mind.

And there is Tom Sharpe’s Porterhouse Blue,  is a novel written by Tom Sharpe, first published in 1974, a satirical look at Cambridge life.

Three Daughters of Eve is published by Viking (£14.99). Add on Tom Sharpe’s Porterhouse Blue,  a novel written by Tom Sharpe, a satirical look at Cambridge life.