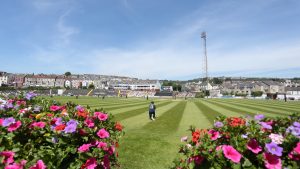 “The incoming tide was said to favour the bowlers [at St Helens]. Glamorgan captains of the past such as Wilf Wooller and Maurice Turnbull would consult the tide tables for Swansea Bay before going out to take the toss.”

This is the fifth in a series of extracts I am publishing in the lead up to the 50th anniversary of the day, Saturday, August 31st, when Garfield Sobers became the first player in the history of cricket to hit every ball of an over for six. It’s taken from my e-book Sobers six hit perfection at Swansea: That was the Day

In the 18th century Swansea was a thriving port. Ships plied to Australia, South America and as far as San Francisco. The Balclutha, one of those vessels, sits, preserved, in San Francisco harbour.

In the 1800s, while the eastern part of the then town of Swansea had to endure the appalling effluent from the copper industry in the Lower Swansea Valley, one of the most polluted industrial areas in the world, the shore of Swansea Bay, two miles away and spared by the prevailing west wind, developed into a desirable residential area.

with the aim of seeking to reclaim the land. Over the next twenty years volunteers, local schoolchildren, the Territorial Army, in fact, the entire community of the area became involved in restoring the land.)

The original St.Helen’s convent land was sold, and area adjacent to the Oystermouth Road was being eyed as prime land for building. Exceedingly smart homes on this, the right side of town, had been built nearby. The sports lobby had to move fast to preserve the coast for recreational.

The sandbanks lining the foreshore were levelled, turfed and rolled, and during the summer of 1873 Swansea Cricket Club played their first games at their new home.

St.Helen’s, now one of the best equipped grounds in South Wales, staged a three day game against a United South of England XI in 1876, followed in 1878 with a game against the Australian tourists. In 1890 the recently formed Glamorgan County Cricket Club played the MCC there.

I doubt if the visitors were told too much about the ground’s construction. In places the soil is barely eighteen inches thick. This was to make it a challenging place to play cricket for 100 years or more.

The ground was improved over the years, with a new stand and the magnificent pavilion and terraced members’ enclosure at the north end. Many of the great players have been seen clumping down the 67 concrete steps from the pavilion to the field.

Huge crowds would gather for tourist games, often staged over the August Bank Holiday weekend. Contests where overseas touring sides played against Glamorgan were considered unofficial Test matches against Wales. In 1948, 50,000 people pressed into the ground for the game with Don Bradman’s Australians.

The ground was packed again in August 1951 when Glamorgan beat the South Africans by 64 runs. Jim McConnon took 6-27 as the visitors collapsed from 54-0 to 83 all out.

Glamorgan County Cricket Club adds on its website: “[St Helens] is the only county cricket ground in the U.K. where you can watch the ebb and flow of the tides, besides feeling the maritime breeze coming off Swansea Bay. It also holds a special place in cricket history as it was at St. Helen’s where… the guile and spin of Johnnie Clay confounded and becalmed Australian batting legend Don Bradman; where during the late 1940s, John Arlott sat in the BBC radio commentary box, alongside Swansea’s favourite son, the famed poet Dylan Thomas; where in 1976 West Indian legend Clive Lloyd struck the world’s fastest double-hundred; …”

The incoming tide was said to favour the bowlers. Glamorgan captains of the past such as Wilf Wooller and Maurice Turnbull would consult the tide tables for Swansea Bay before going out to take the toss.

(Glamorgan CC notes: “St. Helen’s is considered to be one of the fastest drying grounds in the country. However…the wicket can have a fickle character, especially when the tide is in, with the underground moisture aiding swing bowlers. .”)

But on that one day in August 1968, a batsman was never more in control.