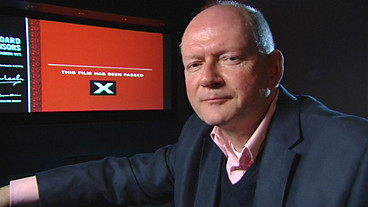 David Cooke – his name every film

He’s still the biggest name in UK films, although audiences can be forgiven for not noticing   David Cooke is director of the British Board of Film Classification. His  signature appears on the certificate that prefaces every film shown in British cinemas and has done since 2004, when he took up the post.

I interviewed the man who spends so much of his working life in dark rooms on the telephone in 2006 for the Sunday Times, and found him obliging and affable. So it was good to come across his entertaining series of blogs for the Huffington Post recently, http://www.huffingtonpost.co.uk/david-cooke/

As he is still in his BBFC job, I’m blowing the dust off the still relevant piece I wrote for the Sunday Times. Here it is.

It is the morning after the Oscars.  But the man with the most frequently-seen credit in British films did not even stay up to watch. He’s already on to his next movie.

David Cooke, director of the British Board of Film Classification (BBFC), starts his week viewing Road to Guantánamo by directorMichael Winterbottom in the board’s own cinema in the basement of its offices at 3 Soho Square. When it is shown in cinemas (unusually the film was  jointly released on Channel 4), Cooke’s name will appear on the certificate which prefaces all films shown in the UK.

“I have 70 people working here, half of whom are film examiners,“ said Cooke. “We see about 17,000 titles a year, including DVDs and videos. So I have to be pretty selective in what I view myself.  But I needed to see this one because of its potentially contentious subject matter.”

Films are referred up to Cooke, who has headed the independent regulatory body since 2004, if they contain material at the highest level of controversy, such as sexual violence, or questionable images of children. He also sees old films, previously cut, which distributors want to issue again in their uncut form.

But sometimes he has to ponder even the most massive family blockbuster. He gave the final word on granting the recent Harry Potter film [Harry Potter and the Goblet of Fire] its 12A certificate. “It was darker and scarier than the previous ones. My team gave it the higher certificate, and distributors Warner asked me to see it and confirm, which I did. Fortunately 12A allows parental discretion, or I would have been lynched.”

The BBFC’s next big decision is likely to be on the controversial UK-US film Destricted. “We will have to consider that very carefully because it sounds like a case of strong sex in a non-porn work.” He expects a similar level of deliberation to that given to the explicit film Nine Songs, which he controversially passed uncut in 2004 as one of his first big decisions.

Cook came to the £107,000 a year job from the Northern Ireland Office after a full Civil Service career. Although he has a strongrecreational interest in film, professionally he is a regulator, not a film critic or moral arbiter. He and his examiners work to guidelines drawn up after extensive public consultation. “We operate in the most open and accountable way we can devise, so that both the public and the film industry can have a sense of how we are likely to call a particular case.”

Last week he met the chair of the board’s children’s consultative committee to discuss how, with expert advice, the BBFC addresses such issues as drugs, self harm and anorexia when they feature in films. Cook gives an example of an intricately specific cut they might make to protect children. They took just one second of a head-butting sequence by a character in a metal helmet from the latest Star Wars movie, aware that young children might try it themselves.

The most important diary date is Wednesday morning, when Cooke and his examiners discuss the previous week’s viewing. “We  show each other particularly difficult scenes we came across. Some of the material we see is grim indeed, such as the new genre of extreme reality — newsreel tapes too strong for TV, strung together with pounding music. We find that hard to watch. We have professional services available to us, a mixture of counselling and professional advice, if we think things are getting to us.”