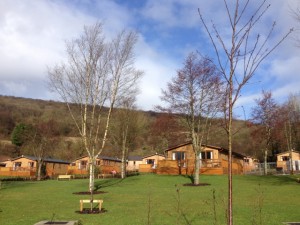 A Jacuzzi hot tub on every veranda. Fibre optic high-speed broadband, HD TVs, and a Bluetooth sound box in every lodge. A fine dining restaurant, spa, gym, steam room and sauna  and outdoor activities such as archery and climbing. All standard features in what may be a new category in UK holiday accommodation coming out of the Recession.

The concept is so new I don’t think there’s a name yet that does it justice. Let’s call it the boutique holiday park for the time being.

I recently stayed at one excellent example of the concept, at Cheddar Woods Holiday Home Park in Somerset. It sits under the famous, namesake gorge on the edge of the Mendips, and looks west over the green and, at the time of writing, partly submerged county. The park opened in July 2013, and the last few lodges will be in place by spring this year (2014).

What part did the Recession play in this new direction for the holiday park? Sales and marketing manager Richard Mellor told me Cheddar Woods are seeing a new type of customer. These are people who used to take several holidays abroad each year. They have cut back and seem to be sampling short breaks at home instead. They have holiday allowance to take and are looking with fresh eyes for good quality accommodation, but in places quite distinct from the traditional caravan park.

When I was invited to stay (full disclosure – my family and I were guests of the company) I was doubtful at first. I have stayed at “holiday parks” in their various forms my whole life. The choice used to be limited to a basic caravan, with nothing more than a kitchen sink inside, and the use of a toilet and shower block. We thought this was normal. It kept us dry and cosy in the wet Welsh summers.

Testing the holiday park anew, as a travel writer, around the year 2000, I found a big improvement. But I was still in a caravan, enveloped in a sort of insubstantial tinniness. I stayed in more holiday parks over the coming years, and while standards rose and support facilities grew, you couldn’t argue that this was anything more than an evolution, rather than a break with the past. It was like being served a perfectly acceptable wine, but slightly watered down and in a plastic glass.

These places still felt like caravan sites, a mix of better caravans and fixed holiday lodges, and improved catering and leisure facilities. I’m sure my school boy self would have been been impressed. The lodges were comfortable, if cramped; most of the top sites also had spas and good swimming pools. Some had gyms. But they weren’t hotel standard. In one place I had to ask, with some embarrassment, for a towel.

Food was safe and unim,agibativem,  the  live nightly entertainment featured artistes you probably never heard of and there were too many noisy and vulgar gaming machines.

I had assumed, wrongly, that this was as far as the holiday park model could go, before you came to the boutique B&B or small hotel. The alternative was to move into a separate category, the Center Parcs model, which offers lodges in a completely car-free environment, on big sites with extensive entertainment and leisure facilities. A complete package. Even then, we had to leave the site we stayed on to find a good restaurant for a birthday celebration.

We set off for Cheddar Woods Park, owned by Darwin Holiday and Leisure Parks, on one of the wettest of a wet winter’s weekends. And this was Somerset, the most saturated county of all in the media’s mind. Quickly checking that the “hills” in the park’s name were above high water level (they were), we didn’t deviate from our travel plans.

This was as far as we could have come from the traditional, seaside summer holiday park experience. Cheddar Woods has, I believe, done enough to place itself in a distinct “boutique” niche of the holiday park. The lodges were fitted and decorated to the company’s specifications. We had acres of space in a two bedroom lodge, with two bathrooms and an ample mixed lounge and dining room. The details impressed me – the toiletries, the towel dressing gowns, three HD TVs, iPod docking stations, and a Bluetooth sound box.

If these features aren’t already available in other high-end holiday parks, they had better be soon in what, I feel, is going to be a competitive end of the market.

There was one defining feature, which alone was enough to put this piece into the premium category. It has a small and very good restaurant, where the menu was inventive, the cooking was noteworthy, the service friendly and attentive and the prices very attractive. A memorable Californian Zinfandel was £14. It was by some margin the best restaurant I’ve found on a holiday park, and it was the residents’ private pleasure as it wasn’t open to outsiders.

The gym, steam room, sauna and swimming pool were up to good hotel standard. My lady companions were content with the spa sessions. A shop sold local can produce. In the lounge they listed that weekend’s live rugby and football matches they were showing. The TV stayed firmly muted when we took a light lunch with a pint of local hand drawn Gorge Best – beer was £3 a pint, below hotel and even pub prices.

Box-ticking the facilities is important, but it only takes you so far. You still need the stand-out details to tell your friends. So how about our personal Jacuzzi hot tub, as opposed to standard hot tub, on the veranda. (I appreciated the daily check to make sure we were doing it right, and hadn’t left it on by mistake, by the on-site maintenance team.)

Less easy to measure is the pleasure of sitting in our lounge, listening to our choice of Spotify music on the Bluetooth speakers, playing a board game, with a good glass of wine, while one of the many winter storms raged outside.

Cheddar Woods – they bill it as a 365-day-a-year “family-orientated operation” – sits under the western edge of the Mendips. The seaside is 10 miles away; Bath and Bristol are under an hour’s drive. We made two trips to Wells (a 25 minute drive), which has one of the finest of our smaller cathedrals, and some attractive old shopping streets. The next day we climbed Glastonbury Tor, and found a very traditional English cream tea down in the town, which is now spiritually placed some where between Bohemia, the Third Age, Kathmandu and San Francisco.

Richard explained how the UK’s economic woes may have played to the advantage of this concept. “Since the financial climate changed in 2008, people have geared down. And maybe  families that normally took three or four holidays abroad each year, then decided to have maybe one foreign holiday and maybe a week in England.

“So they discovered what a wonderful place England is, having never actually holidayed here before, and not seen these places.

“These are people who may have been put off by the standard of accommodation. The options available were tenting and touring campsites, which do not appeal to many people. They would never be seen in a tent – and bed-and-breakfast can be difficult with the traditional British weather, when they kick you out each day and you feel uneasy about returning into a cramped room.

“We often find that people arrive here with quite low expectations, thinking they are coming to the stereotypical bucket and spade type holiday, in a tin box, a static caravan.

“They leave impressed, and surprised, by the high standard of the accommodation and the level of service, which we believes i closer to a hotel than the standard caravan park.

“Our ethos is to raise the bar, and to try to change people’s perceptions about what the UK holiday park is all about. Since we opened in July, 2014, a big proportion of people have rebooked before they leave the park. Some people have rebooked three or four times.” The industry average is about 2 or 3%. The rebooking rate at Cheddar is near 10%.

He explained the investment in free Wi-Fi. “We don’t use satellite dishes. There is underground cabling, and individual fibre optic high-speed broadband into every single lodge, as opposed to transponders dotted around the park, which can be quite temperamental. Our clientele demand it. You shouldn’t be paying for this, as you still doing in some hotels.”

The company set its face against  bingo and cabaret. “We took a business decision. We want to tempt people to try different things. In the morning maybe dad has a workout in the gym, while mum has a treatment. Then the whole family can be in the pool, then go out exploring in the afternoon, and then maybe another treatment or sporting activity, followed by the hot tub, then a meal in a restaurant in the evening then relax on the veranda with a bottle of wine.”

The park encourages guests  to try “something different”. A life skills club for the children, for example, “not your stereotypical children’s club”. On offer is archery, fencing, paint-balling, raft building, abseiling, a climbing wall and sessions on a golf simulator.

Higher end holiday parks such as Cheddar Woods, replacing the conventional, untidy caravan sites with static properties and touring pitches, could bring environmental benefits. They are certainly easier on the eye in the landscape. Cheddar Woods, for example, is built on a rambling former camping and caravan site which included a BMX bike facility. It will generate less traffic than its predecessor.

How do prices compared to the standard holiday park? Richard says it can cost £8-£900 to hire a standard caravan at a typical “bucket and spade resort”. A week at Cheddar Woods, in an entry-level lodge in the height of summer, can be under £900. A weekend or a mid week break out of season starts at around £250-£300.