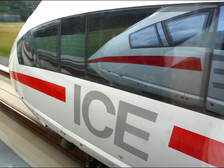 I had breakfast with two travel PR ladies in London yesterday, and in the course of that chat they asked me the routine but important question – what was I really interested in?

It’s a useful question to be asked from time to time, because it gives you the chance, after many years of travel writing, to redefine your thoughts and reassess your priorities.

I came up with much the same answer I normally give, that I tend to do the shorter trips (purely because of the economics of travel writing), favouring UK destinations particularly those I can reach by train, and European and North American cities.

The destination is important. Without hesitation I would include Rome, Venice, Amsterdam, San Francisco and Boston on my top ten list of favorites. But I would find it very hard not to think about the environment in any destination I visit, and in some small way at least incorporate that into any piece I write.

So am I a green tourist? I’m not so sure what that means. Does that mean behaving like an environmental zealot on my travels, keeping a tally of carbon dioxide expended per mile as I trek around the world? Or noting how many times I take the stairs rather than use the lift in a hotel?

Besides, no pure green tourist would even fly. I do, although I am always reassured to see empty seats around me, which means that the plane would have taken off with one more empty seat if I wasn’t on it.

I stay in hotels, without being really aware of their eco-rating. This is partly because, as a freelance travel writer, I work with PR companies who are promoting their clients’  hotels. With only a small budget, I don’t have much choice. But it must be said, most follow the standard practice of not changing the beds or towels every day, and dispensing soap and toiletry sparingly. Many do more than that.

It is still a pleasure to visit a hotel or bed-and-breakfast where they make a virtue out of their care for the environment. The Fronlas  in Llandeilo, West Wales, is just one example.

I would take the train rather than the plane to Europe, wherever it is practical. Recently we visited Amsterdam by train – one change in Brussels. Ironically the connecting train there was seriously delayed, Which cost us about 6% of our stay. And which was equally possible had we flown.

I applaud the proliferation of good public transport across Europe. Trains are green. So are trams. Yes, electricity will come from coal-powered generating stations. But, increasingly, that tram in a German city will be powered by a larger share of renewable energy from wind or solar. It’s the same in Spain. As for France, green nuclear power is everywhere, whatever you think about the dangers.

Ah, but what about giant wind turbines “defacing” open European countryside? It’s a consideration, and it should be addressed. But I have a hunch that if you looked again in 30 or 50 years time, there would be different, improved, perhaps less obtrusive turbines, or even some unthought of power generation. We can be less sanguine about the predicted effects of climate change on that landscape.

One thing that concerns me is the provenance of food. And what a week in which to make that point. Many of the better hotels and restaurants now tell you in some detail where their meat comes from. No need to explain why that’s so important.

And yet we don’t seem to care quite so much about where our fish come from. Fish tends not to be processed, so there’s no obvious equivalent to the horse meat scandal. But while  those horses in Romania aren’t endangered, some dodgily-sourced fish siphoned up in huge numbers in the Pacific could well be.

So I’m wary when a restaurant can’t be bothered to tell me where the fish it is serving comes from, leaving me to ask the wait staff, who may not know either. My fish restaurant of choice would be a place like Wright Bros Soho Oyster House off Carnaby Street, where they tell me which boat caught my fish, from a sustainable stock in inland Devon waters, and sometimes even the fisherman.

How do I manage in some little Turkish seaside village? It’s harder, but a good restaurant doesn’t mind the question. Are the fish populations in the hard-pressed Mediterranean up to providing, sustainably, for umpteen thousands of similar places around its coast? It’s something to be looked up before you decide, if you are lucky using their free Wi-Fi.

Am I in a small minority to care about these things? I think not. It’s just that the tourist industry may not have quite grasped how much people do care – although it reassuring to see how seriously the World Travel Market in London every November takes responsible and green tourism.

I think many “thinking” travelers are eco-conscious in some way. They cannot not be. They visit ancient remains and landscapes that been altered, and often diminished, over thousands of years by environmental change. They will see the landscape Vincent van Gogh painted in southern France and wonder how impossibly hot that vista might become half a century from now.

And let’s not in any way disparage the package holiday tourist, who knows the Turkish resorts, has been going there for ages and is fully aware that there were never so many 40°C days in summer 20 years ago.

How can a traveller – eco-conscious or not – not be aware that in January from now on parts of Australia may simply be out of bounds to the tourist, due to the heat? And it’s been hard for anybody to miss the fact that Bejing has been a hazardous place for anybody with respiratory problems to spend a holiday recently. Fancy a trip to the Arctic? You will see, and hear, everything you need to know about the likely effects of climate change.

So my answer to the question posed in the first paragraph is – I’m one of the many travellers who care about the world about them. And I suspect it’s only the politicians (too many politicians) who don’t care.