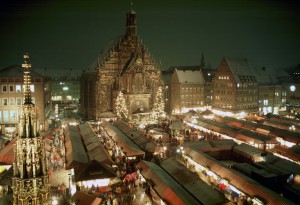 I checked the weather for the first four days of the Nuremberg Christmas market. It could hardly be more seasonal, with snow followed by frost and the sort of nipping cold that is so appropriate for what many consider to be the model for all Christmas markets. It’s the weather to make you want to order another gluewein and wrap your hands ever tighter around it.

Snow is forecast for this evening (Thursday), and then the temperature stays low through until Monday when it could be as cold -9 at night. I have not looks beyond that, but visitors from Britain and elsewhere should take plenty of warm clothes.

On my visit – see my article – it was a little bit warmer, but dull and grey. Today’s promised snow will set the scene perfectly.

It is forecast to be still and dry when the Market is solemnly opened by the Nuremberg Christkind, as is the tradition, at 5:30 on Friday, 30 November, the Friday before Advent Sunday.

The first words that school student Franziska Handke (17), this year’s Christkind, elected by popular vote, will utter in her a ceremonial prologue will be:

“You men and women, you who once were children, too,

You little ones whose life has just begun,

Each of you who rests today, and will work again tomorrow:

Listen, hear what Christkind has to say!“

As you can see from the photograph, the Christkindlesmarkt has an distinguished setting, in Nuremberg’s main market square under the Church of our Lady, the Fountain and in sight of the Old Town Gothic Church of St. Sebaldus. There is a written record of a Christmas market here as early as 1628. I’ve heard the arguments that the reason continental markets have a much longer season, than many in Britain, for example, is there is sufficient space available in old town and city centers to not disrupt the traffic for an entire month.

Last year’s holder of the esteemed office still has work to do. About now the Nuremberg Christkind for the two previous years will open the Chicago Christmas Market. The Chicago market, along with many others, is inspired by and based on Nuremberg’s.

The “little town of wood and cloth” is made up of 180 stalls with red-and-white-striped canvas roofs. Local traders sell traditional wares, such as Nuremberg gingerbread and fruit bread, toys, Christmas and Christmas tree decorations, arts and crafts.

In the market of Nuremberg’s sister cities, stallholders sell handcrafted articles from countries Nicaragua, China, Scotland and the Ukraine.

Since 1969, the Christkind has been elected every two years. The role is open to young women from Nuremberg: they should either have been born in Nuremberg, or lived there for a long time. They must be 16 years old of over, and must not be older than 19. A long list of 12 is whittled down to 6 by a vote on the Internet and in local newspapers. The final selection is then made by interview which includes a test of the girl’s Nuremberg knowledge.

There is a strict rules that’s the Nuremberg Christkind is not marketed in any commercial way. Her appearances are mainly in the context of her role as an ambassador for Nuremberg.