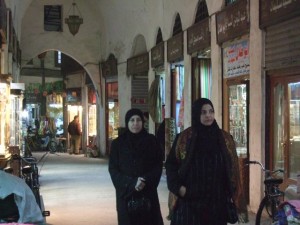 Homs, in Syria, is a good example of the dull, nondescript place that, in iteself, would never interest the average tourist. It has no buildings or historical landmarks of note and no stories from the past worth retelling.

Now, quite unexpectedly, it has an awful celebrity. An evil government is bombarding its own innocent citizens there, as the world looks impotently on. As a parallel here, it’s as if the British Army were pounding Corby with tanks.

I was in Homs, briefly, in 2010, when this plain, dull, harmless place had just found a small but important role in the emerging Syrian tourism. Homs had the great good fortune to be only about 20 miles from one of the finest of all Crusader castles, the thunderous Crac des Chevaliers. 100 years ago a certain T.E. Lawrence, drawing and recording Crusader castles for his university studies, declared it “undoubtedly the most impressive fortress in the world”.

Tourism was very new, after the country’s years of isolation, and there were few places to stay around the castle. Nearby Homs had hotels. It was the perfect base for visiting the castle and for an overnight stay.

I was researching an article on Syria. My wife and I had joined a group who were travelling with Saga Holidays. We had stayed overnight among the golden stones of Palmyra, the ancient oasis city at the crossroads of several civilizations three hours to the east.  We had taken the road west through the desert and into an increasingly fertile river valley, checking in to our hotel in Homs for coffee and a comfort break.

The hotel was smart, recently refurbished and comfortable. The staff were welcoming, but rather stiff and formal as if they were fresh out of tourism college  and working to a curriculum devised in the 1950s. They may well have had “friends” of the secret service working there.

Our coach took us on to Crac des Chevaliers, where  they let us, in  innocent disregard  of health and safety, walk those mighty walls. Freelance guides scurried about, keen to lead us  safely up the slippery stone walkways deep inside the citadel.

We repaired to the wonderful Restaurant Al-Kala’a, just a few hundred yards away. It also happens to be the very best place to photograph Crac des Chevaliers, on a hill just slightly above it. We had  tourist brochure cover views throughout lunch.

It’s almost comical to recall now that the biggest concern the Saga guide had was that I didn’t mention in my article that the restauranteur, so solicitious and busy serving us second helpings of local chicken cooked in lemon and garlic, was so unashemedly and proudly gay. That is against the law in Syria. (But perhaps, on my information, they are firing gay-seeing missiles into his deserted restaurant as I write this.)

I remember a blur of dishes, creative combinations of beans and lentils, cucumber and yogurt, aubergine, zucchini and beetroot, served with mint, olive oil and cumin. We finished with something totally familiar: the dishes the Crusaders brought back – rice pudding and semolina.

On the road back to Homs, some young men standing at the roadside gave us a spontaneous wave. It was the sort of gesture you wouldn’t have expected to survive the rapid growth of tourism, with this Crusader castle as a prime destination, that would surely have happened  in the coming years.   That is, if the Arab Spring had not happened  instead.

Back in Homs, we had the rather doubtful luxury of five hours to fill before dinner. Surely even this unremarkable industrial city had something to offer. And so it proved. We came out of the hotel and walked into the city centre, just under a mile away. We   had amap, but all it did was point us in the general direction of the centre. Our walk with interrupted by long waits at pedestrian lights at junctions with wide avenues to left and right.

We passed electronics shops, a bank or two,  some offices  and small supermarkets. While not hostile, this street felt slightly edgy.   We now wonder if some of those offices  didn’t house the bureaucracy that passes on suspects’ coordinates to the secret police for use when the tanks move in.

Before long we  found ourselves in the city centre. Opposite a big mosque was the entrance to an indoor market. We had alredy seen the fabulous Damascus market, and the one in Aleppo is said to be  even better. But this vast place was, if anything, more authentic.

Absolutely everything was in Arabic. There was no English or even Roman script anywhere. We were among Syrians , very much in their own territory carrying on their own lives, quite untouched  by tourism. It’s a standard tourist aspiration to find the “real” whatever. We had  stumbled into  the “real” Syrian  shopping experience.

They may not have seen a tourist since Lawrence was in these parts, for all I know. Visit the indoor market in a tourist town in, say, Turkey and traders bombard you with the banter they learned from watching East Enders. Remote from the tourist throng, we didn’t see a single word that wasn’t in Arabic. We strolled for ages down labyrinthine alleyways, past stalls and shops selling spices, nuts, wooden spoons, gold, organic honey, olive soap, meat, perfume and a Syrian specialty, racy ladies’ underwear. Nobody tried to sell us carpets or T-shirts. It was a totally authentic traveller’s experience.

We must have taken one  sharp turn to many, because when we eventually emerged on to the street, we were briefly lost. We walked around, disorientated, around for a few minutes in the main square, where a year or so later tanks commanders would  be mowing down their own countrymen, and tried to work out the way back to a hotel whose name we couldn’t remember.

In the end we used the mosque as a landmark, and once we had put ourselves on the right side of it, we were back on track to the hotel.

Ours wasn’t the only holiday travellers tale to tell back at the hotel.  Some other ladies in the party has an amusing story, which was also a commentary on the warmth and welcome from ordinary people you find in most countries if you go looking for it.

The ladies stopped to comment on two mating cats, locked together by the side of a quiet side road. Noting their amusement, a local resident who was just approaching her front door, invited the pair in for a cup of tea. I’m not sure how they overcame the language barrier, but Anglo-Syrian relations were certainly promoted that afternoon. Not only that, the ladies were invited back for an evening meal.

We left the rest of the group, and the city, after dinner that night to be driven back over the snowy mountains to Damascus for our flight home. I scarcely gave this unremarabkble place another thought, until it started to appear onm my TV as the main item on the news, smoke rising, children running screaming from buildings, a frantic doctor pointing to his stricken pharmacist who would have to have his legs amputated. He was raging against a man he woukld probably never invite into his home, Basshar al-Assad.