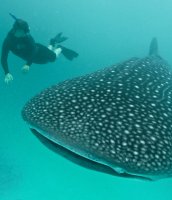 Your holiday snaps of whale sharks could be very useful.

The citizen photographer is starting to be very useful. I would be surprised if one of the images of the year is not the Russian meteorite flashing across a Urals motorway, filmed by one of the dashboard cameras that drivers there habitually carry to record fake accidents.

Other dramatic images of 2013, captured by the man or woman in the street, will include the wreckage of the crashed helicopter in Vauxhall, London.

We can’t all be close to exciting or tragic events when they happen, camera or smartphone in hand. However there is a time of the year when most of us have the leisure, and the opportunity to take photographs. Our holidays.

And in the Maldives tourists with a camera have recently become very helpful indeed, helping scientists chart the movements of the world’s biggest fish, and potentially aiding their conservation.

The tourist today who doesn’t carry a camera or smartphone with a camera is an oddity. There are now more than 1bn smartphones in use around the world. Other interesting statistics: 40% of UK adults now own a smartphone; 80 per cent of us use a digital camera or camcorder.

People like taking photographs of animals and birds on holiday, and, increasingly, fish. Holiday snorkelers see some pretty amazing things,  and it’s easier to photograph them. I saw a very good underwater camera in duty-free at Heathrow recently for around £300. There are perfectly sound watertight cameras available for a lot less than that, too.

Until recently, holiday snaps, from over and under water, have been of little consequence to the wider world. Something to put in an album, to show to, or bore, friends and family members when we get home.

In one sense holiday digital snaps are seen and show less than the old-fashioned, physical ones, because we tend not to print them out. In another sense they can be seen by infinitely more people, thanks to social media, and the facility to post photographs on the Internet.

And this is where they became interesting to Imperial College researcher Tim Davies who, with colleagues, was investigating migratory whale sharks in the waters around the Maldives Islands.

These harmless and inoffensive sharks, said to be the world’s largest fish, oblige science in that they can be individually identified by unique markings behind the gills. Researchers have been compiling a list of whale sharks visiting the islands, and charting their movements and reappearances.

But tourists staying on the islands were interested in these magnificent creatures too, naturally, and have been proudly posting their photographs on social media sites such as Flickr over the past few years. Davies found that many of the sharks tourists posted on those sites could be identified by checking the database he and his colleagues had assembled.

In a press release, Imperial College noted that the study was the first to show that publicly sourced photographs are suitable for use in conservation work, adding to researchers’ findings and telling them more about the sharks’ movements and when and where they appear.

Davies, of Imperial’s Department of Life Sciences, is the lead author on a study published in Wildlife Research, the first to examine how reliable photographs sourced from the public actually are. The study looked at hundreds of images taken by the public, and posted to image-sharing websites. Individual whale sharks could be successfully identified in 85 per cent of cases, surprisingly close to the 100 per cent identification possible in photographs researchers take.

The Huffington Post  asked what the findings mean for tourists.

“That, finally, the records of their experiences can have immense value. The study is a call to arms as well as an invitation to rethink the classic stereotype of the bewildered tourist taking casual photos. Rather than seeing tourism as an act of ignorance, scientists can now use a shared curiosity to help save the places and animals people want to visit.”

Holidaymakers heading to the Maldives, as well as to other regions, can assist researchers in monitoring whale shark populations by uploading their shark photos to the  ECOCEAN Whale Shark Photo-identification Library.  For more information on Maldivian whale shark visit the Maldives Whale Shark Research Programme website.