There are two ways to gaze into the eyes of the Statue of Liberty.

1. Hire a helicopter and hope you get close enough to the face of the 151 foot (46m) high statue before twitchy New York security hauls – or shoots – you out of the sky. 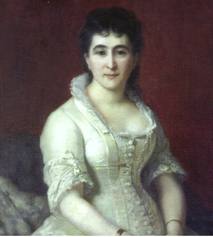 Charlotte Bartholdi – thought to be the subject for Statue of Liberty. The painting hangs in the Bartholdi Museum in Colmar, France.

2. Visit a museum in the little town of Colmar, Alsace, where you may study at your leisure the formidable features of perhaps the most recognizable effigy on earth, in the definitive, person-sized scale model.

I’m in the very house where the designer of Liberty Enlightening the World, as she is officially known, was born. You are excused if his name does not immediately leap to mind.

History records Rodin’s Thinker and Michelangelo’s David. Strange, then, that in the age of the personality we hold back on the authorship of the lady who must have persuaded many anxious men among 12 million arriving immigrants that the dames were mighty tough in the USA.

This is the same man believed to have received the very first ticker tape welcome in New York when he came to unveil his creation. Still pondering? Try this: another of his statues inspired one of most familiar car logos on our roads.

Some historians say, and romantics insist, that Bartholdi’s mother Charlotte was the model for Mlle Liberty (Bartholdi accentuated the lips, nose and cheeks so they stayed strong in the powerful sun, which would have turned softer features in the once-bright copper into a shining blur.)

If true, it’s a charming notion. I like to think of the inspiration for the universal face popping out for a bit of shopping, into the tight, pretty streets of Colmar, with their half timbered buildings in gold brick and balconies brimming with flowers.

Today houses and streets are much as they were, so it’s easy to imagine. Colmar miraculously missed the bombs of three wars in this tempestuous stretch of border land, an 80-mile long oblong west of the Rhine on France’s eastern flank.

Maybe she would amble down for some courgettes or a lettuce to the fruit and vegetable market in “little Venice” – although I prefer “little Bruges”. This area, with its tucked away waterside restaurants, is little changed from when flat bottom boats glided in on the shallow river from the fields.

Mme Bartholdi will surely have cast a fond glance at the Little Wine Grower on the corner of the old market building, one of her big gesture son’s smallest and most intimate creations, his homage to this wine-producing region with its pretty hill side villages and vineyards sloping down from under the Vosges Mountains.

Frederic lived in this charming Alsatian town only two years – returning in the school holidays. But the house stayed in the family and became a museum. So Liberty Enlightening the World has her story told on the cosiest of settings, quite unlike the monumental setting which is her final home.

Even in recent times they were periods when Franco-American harmony did not extent much beyond the “President’s daughter dates rich French boy” plot line in the West Wing. In the mid 1800s, however, it was warm regard between the two countries when Bartholdi met with friends and first suggested a statue to mark the alliance established during the American Revolution.

Bartholdi made 35 different models, all intriguing design variants. Five of them are in this museum. They come with and without the famous headdress of rays, and in various poses. In the end he simplified Liberty’s stance and made it full frontal; her earlier twisted state might have led to structural problems. The star exhibit is that final model.

There is a fascinating photo sequence showing the lady being built in sections in Paris. Craftsmen used repoussé, a method of hammering sheet metal inside moulds. One view shows her briefly raised to full height above Paris. Maybe, as with Greece and the Elgin Marbles, they would now like her back.

There is a model of French frigate Isere. She carried the precious cargo, reduced to 350 pieces and packed in 214 crates, to the USA. Top navigation skills were essential. They had destroyed the mould.

After Bartholdi released the tricolour from Liberty’s face in position on Bedloe’s Island on October 28th 1886, the Frenchman was given a Big Apple parade. “The office boys from a hundred windows began to unreel the spools of tape that record the messages of the ‘ticker.’ In a moment the air was white with curling streamers.”

Bartholdi believed he would now win commissions to plaster the New World with statues. It didn’t happen. His only order was a sculpture of Lafayette in Union Square, Manhattan, and he returned home disappointed. It’s a different story in the Old World. The colossal statues are still scattered through Colmar and across the squares of Europe. Frederic’s Vercingetorix, Asterix’s side kick, is in Clermont-Ferrand. Basle, Bordeaux, Lyon and Paris have his works. The museum shows plans for a never-realised Liberty-sized statue on the Suez Canal.

And how ironic would that have been, as the region still struggles to come to terms with democracy.