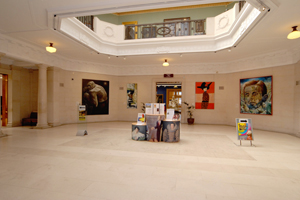 Kingston-upon-Hull, or Hull as everybody knows it, has been chosen by Rough Guides  as one of its top 10 cities of the world to visit in 2016. As it notes,  “things are finally looking up for Hull”,  far out in the East Riding of Yorkshire in the East, which is why so few of us go there.

Hull, Rough Guides promises, will be “brimming with new hotels and restaurants, and even more of that distinctive home-grown creativity the city has always had. There are atmospheric old-timey pubs, eight excellent museums and a picturesque Old Town with cobbled streets.”

It will be only the second city of culture, after  Derry-Londonderry which has the accolade for 2013.

The honour of UK City of Culture is bestowed once every four years. It was created following Liverpool’s success as European Capital of Culture in 2008.

Hull, the seafaring city famous for landing cargoes from distant shores has had an isolation issue in its own land throughout its history, stuck far out in the east of the north, on the cold, wide, windy Humber.

The building of the Humber Bridge in the 1970s helped connect it with the rest of busy Britain, but even today it is not a crossing that features much in the traffic news as a congestion hotspot.

The award of UK City of Culture status for 2017 will probably do more than any single event in its history to, firstly, simply remind the rest of the UK where Hull is, and then to attract visitors and  business to the city.

I have always considered Hull a very rewarding short break destination – I worked there at the start of my career – and good train connections, including direct services from London, make those visits relatively easy.

The highlights and historic legacy include the Arts Quarter,  the Old Town and Wilberforce House, now  wonderfully preserved. It has streets literally paved with fish – spot all 41 on this piscatorial trail and you get a certificate – and one of Europe’s largest fish tanks within The Deep Aquarium, designed by architect Sir Terry Farrell like acapital A on its side, clad in aluminium and black enamelled tiles, dead centre on the  waterfront.

There’s a shopping centre on stilts over an old dock, the largest parish church in the UK – Holy Trinity – the ancient Ye Old White Harte pub and city museums celebrating maritime past and slavery abolitionist Wilberforce. Then there’s the splendid Ferens Gallery with works by Canaletto and Hockney.

And then there is Philip Larkin, “The Hermit of Hull”, widely regarded as one of the two or three most important British poets of the last part of the 20th century. He had illiberal views, but was admired  for the elegant construction of his poetry, it’s beautiful phrasing, and his direct and honest subject matter.

Just as the city of Derry-Londonderry used its own muse Seamus Heaney in preparing its City of Culture bid, so Hull took inspiration from  Larkin, principally his poem “Days”. The idea is for each day of 2017 to make a difference to a life in the city, the UK and the world.

This is only the second City of Culture, and the only model is Derry. So Hull has an excitingly blank canvas which it intends to fill with 1500 events, 25 festivals, 12 artist residencies, and projects that reach into streets throughout the city.

Hull’s proposal was founded on a number of celebratory themes, Roots and Routes, Made in Hull,  Freedom and Quirky. Events will be held in existing facilities and in new venues opening in the city by 2017, including the new Hull Truck Theatre, the Albermarle Music Centre, Hull History Centre, and Hull’s Fruit Market, being developed as “the place to be, for arts, culture, digital and technology”.

Hull should also boast a new dance centre, a refurbished library and exhibition space at the University of Hull,  improvements at the Ferens Art Gallery, and the C4DI Tech Campus.

Roots and Routes will explores peoples’ roots and connections to Hull and the history, heritage and  demographics of a city at the heart of migration and transition. Made in Hull is a response to the perception the city has that its contribution to the UK has often gone unrecognised. This theme recognises the city’s creativity, from theatre, music and poetry to energy, caravans, technology and great architecture. There will be a focus on the writers, directors, musicians and artists who were born or lived there.

Freedom recognises the contribution of Hull in the emancipation movement, with William Wilberforce towering above them all, and the independence of thought, demonstrated by artists such as Larkin and Hockney who worked there.

The fourth category, Quirky,  celebrates “Hullness” – from white phone boxes run by a separate telephone service, to the Museum of Club Culture, Larkin’s Toads and artists’ gardens in taxis.

There will be new work by Hull Truck, national collections at The Ferens Art Gallery building on the success of Warhol and Hockney exhibitions and a major music programme at the City Hall and across  music venues.

The festival “Looking Up”, focuses on the city’s architecture. 52 buildings, spaces and landmarks will be featured. In “Flags, Wind and Waves” international artists will take part in a flag festival celebrating Hull’s relationships with the sea, the wind and the Humber Estuary. The Roots and Routes Food Festival will celebrate the diversity and cultures, natural produce and cuisine.

‘Trucking Good Drama!” will bring theatre to new touring venue in the City, with new work by the Hull Truck comopany. The Hull Mystery Plays will build on the tradition of the city’s community plays with works about Hull in unconventional locations such as East Park or the Dry Dock.

In Print will be an arts event in which products made in Hull will be celebrated on paper, walls, pavements and buildings. A music programme will take place at the City Hall and other venues.

In “Made in Hull”,  the city will programme 12 commissions from artists and producers, some in unlikely  locations. There will be a composer in residence on the Humber Bridge, an installation artist in a Hull caravan factory, a graffiti artist on a wind farm, and a choreographer at Hull’s KC Stadium.

Organisers want to work with Hull alumni such as Paul Heaton, and partners such as Barry Rutter’s Northern Broadsides. Hull also wants to showcase itself in London, through Richard Wilson’s new sculpture, Slipstream, at Heathrow Airport, for example.

National and international collaborations will include working with  organisations in the UK, and other cities such as Rotterdam and Reykyavik. Links will be developed with Opera North, Ballet Lorent and The Tate, and ventures are planned with cities on the E20 trade route, from Limerick to St. Petersburg via Hull. The University of Hull plans an exhibition and education programme on William Wilberforce and Abraham Lincoln with the University of Illinois.

A programme of community based events will include Untold Stories, “finding ways to tell some of Hull’s untold stories, from the export of Salted Cod to the production of Brasso, the heroism of Amy Johnson and the hits of the Housemartins”.

‘My Street’ is a programme of community celebrations across Hull’s 80 ‘villages’ , celebrating their skills, interests and character. “In a box”  will feature art – music, dance, film and digital installations in Hull’s distinctive white phone boxes.

By the end of  2017 the city hopes we will have forgotten the disparaging line from  the Beggars’ Litany: “From Hull, Hell and Halifax, Good Lord deliver us..”, through transforming perceptions of the city.