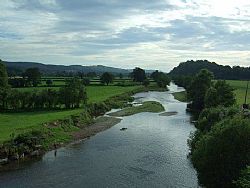 Riding the epic railway from Shrewsbury to Swansea

The whole of the Heart of Wales Line should have been consigned to the history books, along with milk churns, Bernard Cribbins look-alike porters from the Railway Children, and racing pigeons in baskets waiting to be released. But it survived, to become one of Britain’s most scenic rail journeys. The writer bought a ticket.

The train pulls into Sugar Loaf Halt, one of the most eccentrically-named and remote places to which you can buy a ticket.

If you are reading this on the 7.17 from Surbiton, or any other everyday railway approximation to a sardine can on wheels, then Sugar Loaf is the destination for your fantasies.

Nobody to be seen. Nothing stirs in the hills and woods around. For a moment we are in that scene from the Westerns, when the gunslinger arrives for the shootout.

Then a man alights, but with a backpack and a walking stick instead of a six shooter.

As the train pulls out, I glance back to the 14th least used station in the UK. The man breaks into the smile of someone who, for a day, has Sugar Loaf Mountain, one of the most empty and glorious chunks of mid Wales, all to himself.

By rights this far-away stop, indeed the whole of the Heart of Wales Line, should have been consigned to the history books, along with milk churns, Bernard Cribbins look-alike porters from the Railway Children, and racing pigeons in baskets waiting to be released.

Dr Beeching’s red pen must have hovered long over this glorious 120 miles long epic from Shrewsbury to Swansea, through some of the most majestic landscape in Britain. He axed so many other rural routes in the 1960s. Why not this one? Sentiment, still less tourist potential, was not the reason. It survived only because it also carried freight.

Wales has many selling points. Mountains, song, and a re-emerging rugby prowess among them. Let’s add one more: trains. Wales always had lots of railways, as vital for moving coal and steel as pipelines now are for carrying oil in Saudi Arabia. Today the trains are booming again, but this time they are carrying people.

True, they were not exactly pressing customers on Japanese-style on my trip. But with every hike in the oil price, that famous reprieve for this line makes more sense. If this is the new Age of the Train, Wales is writing the first chapter.

Lines snake up into the valleys. They tentacle down to Tenby and into deepest Pembrokeshire. They branch off to all points. One line skewers mid Wales, with branches down to Aberystwyth, and north up the coast close to fabulous, zany Portmeirion, where they shot The Prisoner (soon to be remade). Yet another probes across North Wales, where little steam trains chug to the top of Snowdonia. I needed a week to do them justice, but only had two days. This is my choice.

Shrewsbury was the obvious place to start, a historic jumping off point for forays deep into Wales. The 14.05 heart of Wales train is a crucial departure, and the station announcer treads carefully over its 32 stops. The cosy English Borders towns, Bucknell, Hopton Heath, Church Stretton, gradually gave way to names with thickets of double ffs and double lls, Pantyffynnon, Llanwrda, Llangennech, Llangynllo.

My coach is appropriately named after the famous Swansea rapscallion Dylan Thomas. There is a fair crowd of ruddy-faced country types aboard, heading home from important farming business. A whistle blows. The driver extracts a honk from the horn like the sound of a distressed sea lion. The antiquated diesel engine gives a roar, and we are off over the River Severn on the Great Way West.

Soon the poet Houseman’s pleasant ‘Shropshire Lad’ border country is zipping past. Wenlock Edge climbs up on the left. At Craven Arms we branch off the main line and begin to sashay through the outlying hills of Wales.

Mid Wales as seen from a train can be simply reduced to about 10,000 picture postcard views. Most of them contain a sumptuous stretches of sparkling streams, bordered by startlingly green meadows, with a little village here, a spectacular viaduct there, all set against waves of hill gradually fading as they roll away into the blue beyond.

There’s plenty of time to photograph them all, because we’re moving slower and slower as we head up Wales’s version of the Khyber Pass. But there are no wild tribesmen here (or not any longer) as the line levels out for the spa towns.

Delicate Victorians used to ride this line to take the waters in Llanwrtyd Wells, Llangammarch Wells, Llandrindod Wells and the others. I don’t know about this particular H2O’s healing record, but I’m sure there is something in the water to confirm Einstein’s theory, that time can be made to run slower. It certainly seems to happen in these seriously relaxed stations.

At Llandrindod I have the luxury of a saunter up and down the platform. People are so unfussed I really believe that if the train pulled out without me, the station staff would phone the driver and ask if he minded popping back to pick me up. But I don’t put it to the test

This train takes almost 4 hours to do 120 miles. Eurostars speed from London to Paris in much less time. But who’s hurrying? I get off at Llandeilo. As an overnight stop, it’s spot on for my low carbon traveling plans. But first the tour.

A 25 minute circuit takes in as many wow factor features as you’d find in some A list destinations I know. One ancient castle, Wales’ oldest single spn river bridge, some recently discovered Roman remains, a church rebuilt by Sir Gilbert Scott, lots of smart specialist shops, a rich sprinkling of fine 19th-century houses and the statutory glorious view down over the river Teifi. The National Botanic Garden is Wales is close by.

Eva and Owain Huw called in and also liked what they saw. They bought an early 1900s Edwardian townhouse overlooking the Brecon Beacons, aive it the full makeover, with a £15,000 Objective One grant from Carmarthenshire County Council under its Physical Grants for Growth programme and opened Fronlas as one of the sharpest new B&Bs in Wales,

It was a bold decision, but they decided not to skimp on sort of decor and design features you expect in a classy boutique hotel. My room had a natural stone en-suite with walk-in rainwater shower, designer wallpaper, an organic mattress, White Company bathrobes, wooden floor, organic biscuits. In the lounge jazz played discreetly from an iPod. They burnish their eco-credentials by powering the whole place with 100% green electricity and solar panels.

Fronlas says on its website: “We use 100% green electricity from Good Energy and solar panels to contribute towards the heating of the hot water and the under-floor heating; locally produced organic mattresses, organic bedding and organic towels; ‘A’ rated appliances; all papers, plastics, metals and glass are recycled, and food items composted.”

Next day Eva prepares my organic breakfast, all sourced from Wales, while we discuss my transfer options to the station. It is hardly worth starting the engine of a hybrid car. Olympic sprinters could reach the station in half a minute. I give it three minutes, just to be safe. If you have really keen hearing, you could stand on the Fronlas steps and listened for the train trundling down from Sugar Loaf while you enjoy an extra piece of toast.

I’m back on the train, clattering downhill through the flat green fields of Carmarthenshire. Some Welsh-speaking people get on at Amanford. I catch the flash of a kingfisher. To oblige the non-expert birdwatchers among us, a heron rises unmistakably off the widening estuary.

Once this line skirted the sea front at Swansea, past St Helen’s cricket ground where Garfield Sobers first hit six sixes in an over. Dr B did manage to close that bit: today we enter the city by the non-scenic route. I have time to buy some welsh cakes from the market.

For a moment I’m tempted to return to the utter remoteness of Sugar Loaf Halt. But the reality of a work schedule overrules that impulse, and I cross the platform for the train back to London.
The writer travelled courtesy of Arriva Trains Wales, Virgin Trains and First Great Western.