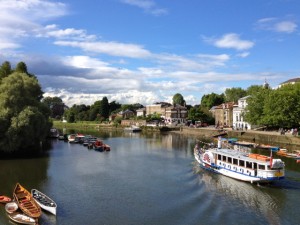 The Thames from Richmond Bridge, London, shortly after the Olympic Women’s Cycle race had passed over it, July 29th, 2012

After this glorious summer of inspiration, we are all aspiring Olympians now.

But, seriously, what can the ordinary, semi-fit person do about his or her own personal fitness legacy that doesn’t involve weeks in the gym, and heavy investment in specialist equipment?

I found the answer, at a safe, flat place place I know well, quite close to millions of us.

Action Challenge, an international “challenge events” organizer, has put together two long-distance charity walks, 50 and 100 kilometres, along the Thames Path National Trail heading west out of London. They describe it as “an Olympic challenge for all in 2012”.

The Thames Path Challenge takes place of the weekend of the 29th and 30th of September, 2012. It will start near Putney Bridge. The overnight 100km route ends at Henley, with participants challenged to complete it in 24hrs. The 50 km option has a target time of 12hrs, to the finish in Runnymede.

I describe this walk as “the people’s footpath” in my book A walk along the Thames Path. It is easy to reach, comfortable to walk (it falls just a few hundred feet from source in Gloucestershire to central London) and it is utterly impossible to get lost.

If you want to set a large number of people walking for as much as 24 hours somewhere accessible in southern Britain, without causing major disruption and closing roads, there is no better choice than the Thames long-distance footpath. I do hope it becomes a regular event.

This is an edited version of the piece I wrote for the Independent, when A walk along the Thames Path was published 20 years ago.

The Thames must be the shortest great river in the world. At 250 miles it doesn’t even make a list of the longest 50. But while few people can spend their holidays following the course of the Mekong (2500 miles), the Brahmaputra (1840) or even be Vistula (610), the Thames is within the scope of anybody modestly ambulatory with two weeks to spare.

It follows the Thames from its source near Cricklade to the Thames Barrier. While it had long been long been possible to walk much of the river bank, the Thames Path National Trail was not formally created until 1996. It had, we can be sure, been in daily use for thousands of years. Early man, fresh off the land bridge from the continent, could have followed the great wet thread as far inland as he cared to, knowing it would always lead him back to his flock and his tribe.

In more recent history – the 18th century – the boatman working out from the London docks to Cricklade (where a canal split off to the north) and on through to the Severn with their barges, preferred to walk along the towpath leading horses. And even today what sensitive soul would prefer to potter along in a non-descript hire boat at 3 miles an hour when the crisp bankside turf beckons?

I walked the Thames bank – from its first gurgling, to wide estuarial reaches – in about three weeks without getting my feet wet, although for many miles the path runs within inches of the water. Only when it reaches London does it occasionally waiver.

For most of its length the path is billiard table flat (the fall is 600 feet in 180 miles), and can be followed with no navigational nous whatever, over glorious open fields and with only stiles to negotiate.

River Thames bridges have come and gone over the years, destroyed by age, fires and developers, env sold to Americans. Some of the London bridges were built in the 1930s when it was customary for them to be opened by, at the very least, the Prince of Wales, who once managed three West London crossings in a day.

Why, then, did the Prime Minister of Canada get the job of opening Chelsea Bridge in 1937? I can only assume the Prince, then Edward VIII, had been booked for the job but was detained by unexpected matrimonial complications.

Distinction is haphazardly bestowed all along the Thames bank. At Cricklade is one of the finest natural flowerbeds in Britain, the North Meadow national nature reserve, a huge, and unhedged, mile-long torrent of red and yellow flowers and grasses, its colours subtly spreading and dissolving from April to June. The path passes through it.

Aropund Marlow long established boatbuilders still turn out traditional slipper launches, whose sterns taper to the thickness of a wafer. At Henley the walker who might never afford admission to Ascot or Twickenham may walk free of charge through the nearest thing England has to a Venetian pageant, and see some rather good boat races as well.

At Cliveden the bankside walker has the chance of just two glimpses of England’s closest equivalent to a Rhine castle, the former stately pile of the Astros, sitting haughtily on a wooded hill.

Apart from a few urban interludes, the path offers pleasant countryside and fine views all the way to the M25 at Staines, where grassy bank finally gives way to a tougher town surface. Most walkers join the path at points east of Reading, where the Victorians created a latticework of railway lines offering the prospect of coffee in Belgravia and lunch on a skiff at Pangbourne. Most of them are still there. They offer a a huge range of possible walks, as the river twists and winds close to stations down through Berkshire and Surrey and into W. London.

In the remoter lands west of Oxford, the walker may find a solitude which is rare in southern England. The 17 miles section from Lechlade to Newbridge (“new” on the Thames usually means ancient) illustrates the point. In the vacant flatlands where the map contains wide white spaces, for want of a contour line or a geographical feature to put on them, I found myself, midway between Buckland and Chimney, in a riverscape to challenge those who think of “remote” only in terms of upland wilderness or wave-pounded coast.

I stood on the flat bank and looked all about. Trees and meadows, smudged scarlet with clover, faded into the flat infinity; for a few minutes there was not a person, boat or dwelling visible in any direction. I have found a discrete paradise. The peace was finally broken by a maintenance boat tearing up river.

Hereabouts the river follows a zany course, oscillating wildly through an ancient landscape. The path took me past fields named Cowslip Close and Water Furze; here a former navigators’ pub, there the site of a lapsed ferry, crumbly stone walls where cattle once took to boats.

There are ancient living monuments all along the bank. I chose the wraith’s route through one tottering waterside ash; it’s heart had been hollowed out but it still gathered sufficient sustenance from the ground through a flimsy frame of wood, to produce a vigorous and defiant canopy of leaves, like a well coiffed centenarian. Even at the slowest amble, the horizon is close enough over the flat fields. In these shortened perspectives new features, spinnies, hills and farms break into view and pass just as suddenly out of sight. A dense screen of cow parsley will draw back to reveal an ancient church in stone the colour of butter, adrift in a fidgeting sea of wheat. Little green mats of vegetation dawdle downstream; in this way Gloucestershire’s rare flora is set adrift to colonize Middlesex.

The old books warned respectable people not to venture past Tower Bridge, the last Thames bridge to be built on a fresh site. It was a sour, violent land of strange crimes and rituals. There Gaffer Hexham picked the pockets of the drowned in Our Mutual Friend. Now it is studded with ever-higher monuments to commercial self belief, all plate-glass Eiger faces and lofty atriums full of greenery.