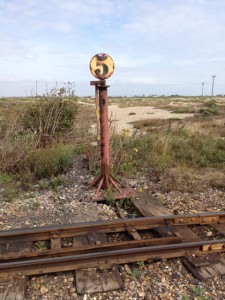 Dungeness – one of the Parade’s End locations, looking over Romney Marsh, which Ford knew well

Coming completely fresh to Parade’s End, in the new BBC adaptation, I found concentrating on the plot and characters challenging enough, without giving any regard to the locations.

Quite early on there is a scene outside a grand house in the North where the Benedict Cumberbatch character, Christopher Tietjens, grew up. I discovered later this is Duncombe Park in Ryedale. Scenes were also filmed in the North Yorkshire Moors National Park, near Scarborough.

So is this “Parade’s End” country? But then we are back on the train again, after that early torrid encounter in first class between Christopher and the Rebecca Hall character, Sylvia, with a white horse carved on a hillside in the background – which one, I’m not sure. Christopher is on his way somewhere, and it’s the style of this uncompromising drama that you have to work it out for yourself.

We next see him playing golf on a links course, where Valentine and the other suffragette rush on for their confrontation. Is this Scotland, the home of links golf? The location is as ill-defined and amorphous as some of the dialogue and action, and tantalizing too.

Then the clues begin to arrive. Did I hear a reference to Camber? And another to Rye? So we are at the opposite end of the land, in East Sussex and Kent. I know we’re heading to Belgium soon, for the First World War scenes, but this does seem to be a strong candidate for that prized tourist promotion designation of “Parade’s End Country”.

Rye Golf Course is close to Camber Sands in East Sussex. You may imagine for yourselves Valentine and Gertie tramping over the dunes and breaking into the game. That comical scene, of Valentine escaping after Christopher trips up the policeman, ends with a view over the sands themselves, wide and often very empty. It’s then worth calling at the nearby Gallivant at Camber. Last year chefs from the Gallivant served me delicious seared Rye bay gurnard on brown shrimp potato cake, click here, miniatures of the dish they serve as a main course. (Gurnard is a by-catch, normally caught incidentally, then thrown back in, dead, as the fishermen go after the far more lucrative cod or bass.)

Where did Christopher and Valentine go next? They take a romantic meander  through what I assume is the Kent countryside, with the married Christopher observing all the proprieties, and end up in a field with the now injured horse. It looks like the Kent Downs, although I can’t be sure.

The book’s author, Ford Maddox Ford, was very familiar with Kent. He lived at several places in the county, including near Aldington, a village eight miles south-east of Ashford, on a hill top above Romney Marsh with splendid  views over the marsh towards Lymphne  and Dungeness, which also features in the story. Rye and Camber are close by, further along the coast to the west.

He sublet his farmhouse at Postling near Hythe to the writer Joseph Conrad when they were collaborating on literary projects, moving his own family into a nearby property. Around this time Conrad was working on Heart of Darkness (February 1899) and Lord Jim. Ford was writing The Cinque Ports, his book about the five ports designated in 1050 by Edward the Confessor to protect the Straits of Dover from attack.

Today Ford’s Kent is an incongruous  mixture of the very latest communications, with motorways and the High Speed 1 railway to the Channel Tunnel (140 mph trains from St Pancras take just 37 minutes to Ashford) and early 20th century, gentle and drowsy, features. The line from Rye to Ashford is an example.

In the middle and south of the county the landscape and sense of seclusion is not so distant from the easy pre-World War I days the author was depicting in the book. This could indeed be the Kent (and part of East Sussex – there’s a reference to Udimore)  that Christopher drives around in a horse and cart with Valentine, via a drop off 20 miles beyond Tenterden, to see that blissful summer equinox dawn.

There’s one wonderful description in the book. “He loved this country for the run of its hills, the shape of its elm trees, and the way the heather, running uphill to the skyline, meets the blue of the heavens.” The elms suggest he is writing about the Kent he knows.

One of the Kent locations is the Royal London Society for Blind People’s Dorton House, near Sevenoaks. They filmed in the Georgian building’s panelled dining room, which becomes a gentleman’s club; the library serves as the Cabinet War Office. The Wedgewood Room is the bedroom of Valentine Wannop.

The school isn’t open to the public. However one location you could easily have to yourself, although I suspect not for long, is isolated and historic St Thomas A Beckett Church, in Fairfield, Romney Marsh.

Although it’s interesting to visit specific houses and other buildings where dramatizations such as this are set, it’s also good to have a sense of the wider location that inspired a writer, and which you can interpret through your imagination.

I’m sure Romney Marsh hasn’t changed much in a century. Little breaks the profound silence here.  It seems to be governed by the sort of aural forcefield you’d find in a Dr Who plot. No noise gets in, and nothing gets out. There’s an all day crepuscular mystery. You may hear laughing frogs, and nightingales.

Other locations used in Parade’s End, named by the Kent Film Office, are St Mary’s Bay and Dungeness. There is a convenient connection between the two for the visitor. It’s the Romney, Hythe and Dymchurch narrow gauge railway, opened in 1927, around the time Ford lived in the area. It packs bags of public transport punch for its size, running for 14 miles, the length of Romney Marshes, from Hythe all the way to Dungeness.

The sea shore is composed of millions of tonnes of shingle, sorted  by the elements into different sizes as you progress along the coast.  (Hence Greatstone and Littlestone.) Steam locos hurry in to Lilliputian stations and rattle across the strange and desolate outer reaches of Dungeness, dotted with wooden fishermen’s houses made out of old railway carriages, and their boats drawn up on the pebbles.

Dungeness is the terminus, not very much changed in a century, even in the shadow of a nuclear power station. Another author brought her characters to Dungeness. AS Byatt sets a crucial scene on the shingle not far from here in her Victorian novel The Children’s Book.

On a visit in August 2012, we were surprised to see a particularly long train pull in and disgorge a big party of Chinese tourists. They made the most of the hour or so they had, inspecting the 1904 Lighthouse, taking the boardwalk to the shingly shore, and even trying the, for them, interesting culinary experiment of the cafe’s sausage rolls.

There are various various places to sample the remoteness of this corner of Kent. The Dungeness National Nature Reserve itself is odd in that it doesn’t have official borders. You can consider it reached when you hear the first wheatear or see the first wild carrot or the very rare Nottingham catchfly – lost to its namesake city, but found here.

One place with full facilities I would recommend here is the car park of the RSPB Dungeness bird reserve, with good picnic tables, public toilets and excellent serve-yourself coffee in the visitor centre for £1.

Filmmakers can’t risk showing too much of an outdoor location in case they include some incongruous contemporary detail in shot, but I feel they have done enough, for me at least, and whatever future episodes will bring, to give me a real sense of place for this drama.