The Guardian has blown the Night Manager’s filming locations cover. This elegant BBC production based on the John le Carre novel flitted from sumptuous Alpine setting to smart hotel verandah, from a real Istanbul to a make believe Egypt displaced to somewhere else in North Africa. 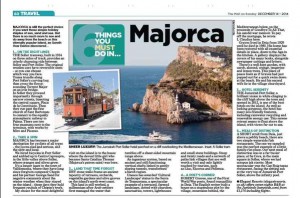 My article on Mallorca in Mail on Sunday, 2014

The location of one pivotal scene, where the Tom Hiddlestone character (Jonathan Pine) makes contact with Hugh Laurie’s (Roper’s) entourage would be impossible to identify, though, if you hadn’t been there. The Guardian names it as Ca’s Patró March, Cala Deià, northern Mallorca. We were there, by chance, in 2014.

The restaurant is short stroll (or drive) down from the village of Deià, just above a pebbly beach. There are two waterside fish restaurants there. Ca’s Patró March is the one on the left as you
face the sea, a well-established little family-run place. They kindly
advised us that one starter of pimientos de padrón fritos, peppers in
fried virgin olive oil with coarse salt, before our grilled fish, would suffice for two.

It might be good to combine dining at this restaurant with a visit to the poet Robert Graves’s house, on the edge of the village above the cove. Graves, one of the First World War poets, found tranquility for much of his later life in Deià. The English writer built a house on a stupendous plot by the village, mountains behind, the Mediterranean below, on the proceeds of Goodbye to All That, his candid war memoir. To pay off the mortgage, he wrote I,Claudius here. Graves lived here from 1929 until he died in 1985.

The home is restored with all essential details in place, down to the Aga in the kitchen. A gallery displays the covers of his many books, alongside newspaper cuttings and letters. There’s a well-kept garden, with carob, almond, orange, tangerine and lemon trees. This place of deep peace feels as if Graves had just popped out for a quick swim down at the beach. Robert and his second wife lie in the village churchyard.

There is another filming location nearby, in Port Soller. Tom Hiddlestone’s Pine manages to contrive a meeting with the evil Roper’s wife Burr on Carrer de la Marina, the corniche that runs along the sea front in the town. (It is about half a day’s walk on from the restaurant on the coastal path.)

There’s the opportunity for a side trip here, on the original tram, built in 1914. The original wooden cars still trundle along three miles of track between Port Sóller’s curving bay, crossing the fierce-sounding Torrent Major on an iron bridge, and on into the small town of Soller.
Here they proceed importantly through narrow streets, bisecting the central square, Plaça de la Constitució. Then past the fine church of Sant Bartomeu, to connect to the equally atmospheric railway that links to the capital Palma. There are two free museums next to the terminus, showing works by Miro and Picasso.