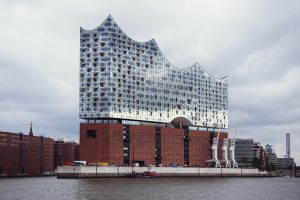 Why the Elbphilharmonie, on the banks of the river Elbe in Hamburg, cost ten times the original figure, and took six years longer to build than the first estimate, is likely to matter less and less after its formal opening on January 11th, 2017.

The venue is as imposing and spectacular as most new performance centres seem to be these days. Provided the complex of three concert halls are in good and constant use, the issues of cost and time are likely to recede into the game of political consequences, where it is up to voters to decide how much they care. And they certainly seem to care enough for the new venue to book out most of the concerts, at least in the main hall, though to next July.

Until now Hamburg (listed by the New York Times as one of its 52 places to visit in 2017) has not packed the classical music clout of Munich and Berlin, of Amsterdam and Vienna, in the existing Laeiszhalle. It  opened in 1908, and has been a platform for many renowned artists. But for many visitors Hamburg is still best known for its association with four young men from Liverpool, who partly founded their career here.

The city can get on with asserting its musical credentials, beyond the Beatles, following the
opening of “Elphie”, as the hall was affectionately named. It gives the birthplace of Mendelssohn and Brahms the opportunity to build on those composers’ reputation.

The glass-panelled concert hall sits atop a former warehouse in a regenerated part of Hamburg’s old port, and detached from the rest of the building for soundproofing reasons. It was designed by Swiss architects Jacques Herzog and Pierre de Meuron, who were responsible for London’s Tate Modern, Munich’s Allianz Arena football stadium and Beijing’s Olympic stadium. (And well worth the wait, said the Guardian’s Oliver Wainwright, placing it on his top ten list for 2016.)

Japanese acoustician Yasuhisa Toyota designed the 2100 seat Grand Hall in the “vineyard” style. The seats rise steeply around a central stage like the sloping terraces of a vineyard, rather than in the conventional rectangular shoebox style. This guarantees unobstructed sightlines of the stage and excellent listening possibilities from every seat.

The Elbphilharmonie contains two other concert halls. One is in the classic “shoebox” form, isuitable for chamber music, jazz concerts and solo recitals. Another, Kaistudio 1, is the centre of a lively music education area within the old warehouse. It can serve as a concert venue for contemporary and experimental music and as a rehearsal space for ensembles and choirs.

The audience seems keen to book ahead. In a random search I noticed that a concert in mid May with the Academy of St Martin in the Fields was sold out. So was the one the next day, Anton Bruckner’s Fourth Symphony, performed by the resident orchestra.

I would urge care, however, when you book online. You may think you’re buying tickets to the brand new Elbphilharmonie concert hall, but end up in the perfectly grand and distinguished, but 108-year-old Laeiszhalle. The website combines the two venues for booking purposes.

There are bicycle stands available in front of Elbphilharmonie, something you rarely find outside the great halls of the world.