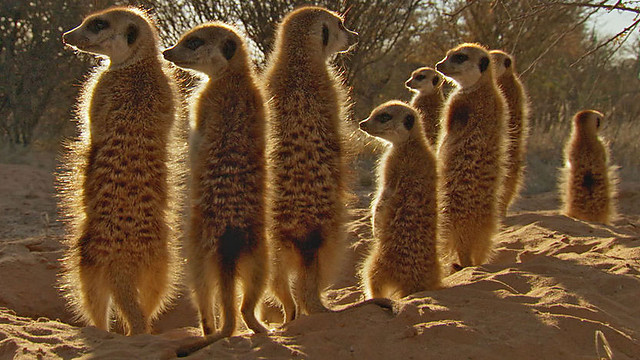 We are waiting for the next episode of Attenbrough’s Africa too.

The Attenborough wildlife series is one of the great TV events, all the more to be relished and enjoyed because here is a man of 86, still in full bloom, continuing a body of work that links back to the very early days of television.

Now he’s back on prime time BBC One, and it doesn’t come much primer than 9 PM on  a Wednesday evening, on the timeless African stage he knows so well. Attenborough will be the first to shine the spotlight of adulation on the cameramen and women who have brought so many magnificent and majestic images back from their endless days in the African plain and forest. And the expert editors, whose skill is so often overlooked.

And yet, after so many years of trying to groom a successor, the BBC cannot give us anyone better, more authoritative, more sympathetic and understanding to commentate on the wildlife wonders of the world.

I was privileged to interview to David Attenborough on a number of occasions when researching articles on his earlier wildlife series, and I include this short extract from my e-book, based on articles I wrote for Radio Times. It features three separate, and quite different aspects of Africa’s immense and diverse wildlife.

Trials of Life, the third strand in the great “Life” trilogy, is about animal action – from being born, to launching the next generation.

[To make] Trials it was essential that these creatures did these things – finding food, making homes, getting about.

They went to Tunisia to film the desert ant, which navigates by the sun to scavenge insects felled by some of the most extreme heat on earth. To hang about in 50C temperatures was to fry. But they didn’t have to wait long. The series was founded on the most meticulous trawl through the scientific literature, and the wonderfully generous help of experts in arranging the very best locations. A German professor had done the hard work, dripping under a parasol to confirm that noon was the moment when everything else expires, except the ant.

“Within half an hour they came out and ran about, taking their bearings by the sun, and we had our sequence,” said Sir David. And nobody fried.

However, when it came to the highest life forms, they could forget all that careful scheduling. Attenborough has never run so far and for so long as when he gathered the first sensational film of a team of chimps hunting colobus monkeys in the Ivory Coast rainforest.

The night before they would go out to locate the chimps’ temporary bivouac, then return to camp, perhaps a few hours away. “We had to get up at 4 am to reach the bivouac before those lads decided to have breakfast. So off we went through the forest, falling into bogs, tripping over lianas, tearing our clothes, to arrive, totally buggered. The chimps, reclining in the trees, would peer down as if to say ‘Oh, here you are again. Let’s go then.’ And they would all pelt off.”

The chase of the chasers, cameras juddering, Attenborough delivering a genuine running commentary, is high octane thrill. When the kill is made the following female chimps let out an awful chorus of whoops and screams. “Terrifying,” says Attenborough. “Just like the tricoteuses at the tumbrels. The whole scene is burnt into my mind.”

Other subjects remained obligingly and monumentally static. Then it would be the producer’s challenge to spice things up. The Nigerian termite is nature’s master builder. If the insects were man-sized, their 20 feet high mud creation would be a mile high. Naturally Attenborough was required to report from inside, “and deliver my lines without complaining that I was being bitten to hell around my rear end.

“How can an insect with only a few brain cells take a glob of mud, mix it with saliva into a pellet and place it in the pitch dark to form these extraordinarily elegant pillars and arches, like a medieval cathedral? It beggars belief.

“Some American commentators asked things like: What is the message here? What is this programme telling us about our ourselves?’ But that is the most arrogant, egocentric thing to suppose, that the only reason to look at the natural world is for what it tells you about you.

“Like Sam Goldwyn, I don’t send messages. I don’t recognise the distinction between entertainment and education. Forget if it teaches us about being monogamous. The complexities and astonishments of the natural world are enough as far as I’m concerned.

“Take spiders; they are simply the most amazingly interesting things. What they do is their solution to remaining alive and handing on their genes to the next generation. This is what life is about – its quiddity, its essence. If you aren’t interested in that, then for goodness sake what are you interested in?”