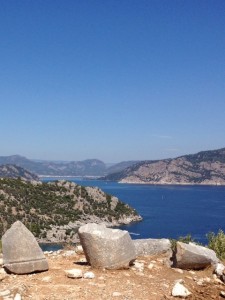 View from above Amos Bay, SW Turkey. Photo by the author.

When do tourism destinations achieve the industry’s equivalent of a football club’s promotion to the Premier League?

The simple answer could be, looking at this from a UK perspective, is when British Airways starts flying there.

It’s been a remarkable transformation for the holiday industry of South West Turkey. I first went there in 1987. The main point of entry was Dalaman Airport, then a military base, which also received a few holiday flights.

There were a few small bed and breakfasts and box-like hotels to choose from  on the coast; the mass tourism that was to bring millions here for the formula summer sand and sea holiday was still a few years away.

25 years later, the region receives millions of package holiday visitors, most of them through the twice modernised and greatly expanded Dalaman. But the small, if you measure it in numbers alone, yet significant change in the nature of that tourism profile will be marked by the start of a regular British Airways service. The carrier will fly to the airport four times a week, from Gatwick, from April 27 (2015).

And where does BA see its market? I suspect it is among visitors patronising the good, and growing, choice of small, chic and comfortable boutique hotels and B&Bs. It’s a new niche in the market that has opened up only in the past four or five years, but it is now sufficiently well established for BA to see an opportunity. (The airline already runs a summer Saturday chartered BA service from Heathrow to Dalaman, on behalf of Turkish boutique hotel specialist Exclusive Escapes.)

The market shift which BA recognises in south-west Turkey is unusual. Most prestige destinations are built on a famous old hotel or two, and grand houses, or at least old houses with distinction, turned into upmarket accommodation. But there were no old hotels of distinction, or grand old houses to be converted, in this part of Turkey.

It was easier 300 kilometres up the coast on the Cesme Peninsula, just west of Izmir. This is an entirely 21st-century destination founded on an abundance of solid stone houses, built by the Greeks around the end of the 1800s, and now converted into dozens, if not hundreds, of stylish little hotels.

It’s different in south-west Turkey. Many of the new crop of quite sophisticated hotels, B&Bs and guesthouses were built at the end of the 1900s and in the first 14 years of the 21st century, either from scratch or in previously dilapidated village houses. Two examples of these new boutique hotels are the canyon-top Dionysos, a scattering of new build lodges overlooking the Bay of Kumlubük, and Badem Tatil Ev, a smaller place in Selimye, on the Bozburun Peninsula.

It was easy enough to line the beach-front with undistinguished tourist hotels  in towns such as Marmaris for the mass market. The holiday industry has had to work harder to raise accommodation standards to a level that attracts a carrier such as BA. And to offer diversions (and quite major ones) to appeal to more discerning visitors, such as the new long distamce trails.

I notice BA, in its publicity, refers to this area as the “Turkish Riviera”. On a small scale, and in places along the coast it is beginning to justify that description. The challenge, now, will be to hold onto it, and keep those BA flights rolling into Dalaman.