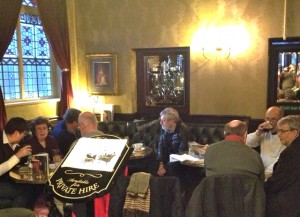 The Victoria Hotel, Leeds, named in the New York Times 52 Places to go in 2014

Listing the travel destinations of the year is an enjoyable early-January exercise by newspapers and magazines. These choices can be a useful guide to travel trends, drawing on travel agents’ data or cultural and sporting events to come.

I have a favorite list, which doesn’t seem to attract so much attention in the UK. That is to be expected. It’s the New York Times travel section compilation of destinations. Americans see the world differently.

The places featured – or should I say honoured, in such an august publication? – include cities (Cape Town is at the top of the list), entire countries (Scotland, where one of the events to celebrate is the opening in April of the 135 miles long John Muir cycle way) and places vast and tiny you might never have thought of, such as downtown Los Angeles and Saint Petersburg, Florida.

The list for Europe is just as random, taking in the Albanian Coast, Rotterdam, Frankfurt, the Vatican and the Highlands of Iceland.

Some countries, such as Japan and Sweden, have several mentions. One city, Athens, might be placed in a “Phoenix City” category all of its own.

There are some genuinely rare places, such as Subotica in Serbia, which few readers will know about. The British Lake District village of Cartmel is chosen as “one of England’s most unlikely culinary destinations”.

For my reading, one of the most interesting choices is Yorkshire, although it’s not on the list for the reasons you might expect. Many other travel pages have selected the English county because it hosts the first two stages of the Tour de France, in June (2014). The Times is to be commended for including it for quite a different reason, its beer: “A Photogenic, and Historic, Ale Trail.”

Writer Evan Rail, who takes his inspiration from a new book Great Yorkshire Beer, sprinkles some enticing pub names across his crawl through three cities, Sheffield, Leeds and York.

Leeds, as a place to take a pint, has powerful memories for me. It’s the city where I was first introduced to beer, when I was a student there. And I’ve known the pub mentioned in the Times piece, the Victoria Hotel, just behind Cuthbert Broderick’s noble and majestic Town Hall, for many years.

I was in the Victoria, full of old wood, mirrors and timeless space, late last year to attend a reunion. It happened to coincide with a rugby league International. The pub was very busy, so management asked us if we minded fans watching the game on the screen above our heads. They did so, not intruding, with the sound turned down.

This is one of many historic pubs in the city that would reward a visit. My own list would include another Leeds pub from the past, Whitelocks. You can find this national treasure down down one of the ginnels (narrow alleyways) that runs off Briggate.

Whitelocks is a tight fit of smoke-pickled wood, engraved glass partitions, faded mirrors and brass tabletops. A time traveling Victorian alderman would feel at home. There was outrage when a previous management hinted at an image change. But new owners took over, and completed a sympathetic mini refurbishment, based mainly on cleaning and polishing, leaving its spirit intact. The decor is just as John Betjeman and Yorkshire cricketer Len Hutton would have known it in the 1930s.

In York the Times positions “a Tudor-style pub at the end of every cobbled lane”. It was in York where I had the sombre pleasure, in a particular pub many years ago, of drinking a pint of soon-to-be-extinct beer, from the last barrel of traditional ale ever to be produced by one local brewery. It took a vigorous and heroic fight led by the Campaign for Real Ale (CAMRA) to halt the programme to phase out these old, carefully-crafted beers and replace them with the standardized, sterile keg variety, and then reverse it.

The writer is correct in mentioning traditional handpumps as an indicator of the authenticity campaigners fought to retain, but his readers should know that, happily, this old-fashioned detail has been ubiquitous for ages.

One of the “modern beer temples” Evan Rail proposes in York is Pivni, which happens to be a sister to another pub, the Sheffield Tap, he mentions in the same article in Sheffield – quite an accolade for one company.

When the Tour de France whizzes through Yorkshire in June, I’m sure they will  be raising a celebratory pint in the Times’  left field travel destinations in the county, the Cross Keys, the Fat Cat and the York Tap. And, of course, the Victoria.