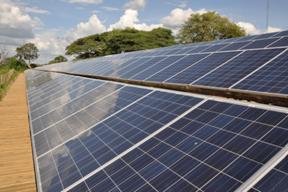 To switch an entire tourist operation over to solar energy in one go is quite an achievement. But Wilderness Safaris are beginning to make a habit of it.

This spring Mombo camp in Botswana became the latest in the company’s portfolio to become entirely solar powered. Wilderness invested US $860 000 in replacing diesel-powered generators with 396 photovoltaic panels. This should enable it to reduce carbon emissions at the camp by 97%.

Last year the company retrofitted several other of its camps in Southern Africa so that all the vital functions are solar powered. At Kalahari Plains, for example, where there are “10 en-suite canvas units”, photovoltaics power the entire camp, including the staff camp, from the lighting of guest rooms to refrigerators, from office equipment to water pumping and purification.

A press release on Zarafa, another of the luxury camps powered entirely from the sun, notes that its 136 panels produce electricity to, among other things, run ice machines, a cold room for food and drinks, deep freezers, lighting and all the guest appliances.

In June 2011 the diesel generators at Xigera Camp were turned off and the powering for the entire camp was switched across to 135 solar panels producing enough energy from the sun to run the entire camp – including all fridges and freezers. All water, as it is at the other camps, is heated by evacuated tube solar water geysers or thermodynamic geysers.

As the figures for Mombo show, there are still some carbon emissions. This may have to do with vehicle movements and other  small operations from which the carbon content cannot yet be eliminated.

Safari camps are, of course, generally in sun-blasted locations, with enormous amounts of free nonpolluting energy available, should they seek to utilise it. One of the problems is storing the potentially enormous amount of energy generated during the day. At the moment this is done with old-fashioned battery technology.

At the camps solar electricity, produced during daylight hours, is stored in a large bank of deep cycle batteries, delivering 220 volts electricity 24 hours a day via a system of inverters.

Group sustainability director Derek de la Harpe said: “Wilderness Safaris is committed to major reductions in the use of diesel- generated electrical power across all our operations. [We] will not build another camp without incorporating a major element of renewable energy.”

The company is demonstrating solar generation to some important  people. This is high-end tourism, and the sort of tourists who stay in the safari camps tend to be well off, and quite high in their particular field. These are clients who may be in a position to influence opinion; they are the sort of people more likely to encourage investment in renewable energy either in their own businesses or in their circle of influence.

There are other practical benefits. Carbon-based fuels no longer  have to be transported across often delicate landscapes. And   there is an aesthetic benefit: camps can now switch off the often noisy and sometimes smelly diesel generators.

Wilderness Safaris are not the only operator to be committed to reducing its impact on the environment by switching to renewables, but they are one of the leaders in the field.