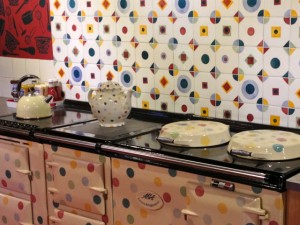 Stoke-on-Trent is buoyed up by the Emma Bridgewater factor, helping its advance as a busy and interesting short break destination.

Until recently Stoke on Trent was associated with one main thing, pottery. And it still an essential visit to pay, to the places where they make the things that underpin our daily lives – teacups and dinner plates, gorgeous vases, jugs and mugs.

Today the home of British pottery manufacture since the 17th century, which now features the brightest and freshest statement of Stoke’s famous trade, in Emma Bridgewater’s factory, has some additional, and substantial, attractions to define it. They include Perseus with the head of Medusa, items from the most valuable collection of Anglo-Saxon treasure ever found in Britain, and a Spitfire. And there is a trail to commemorate Stoke’s most famous contemporary son, Robbie Williams.

Technology is helping the tourism push. Until recently Stoke, made up of the “Six Towns”, Fenton, Tunstall, Burslem, Longton, Stoke and Hanley, was a tricky place for the visitor to navigate, a complicated network of roads and lights and intersections. Now there is a simple answer. We set the addresses of target attractions in our car’s satnav and drove easily from place to place.
Let’s begin with pottery. These are the places I recommend you see on a two day visit. The principal landmark is the Wedgwood Centre, well worth a half day visit. The 250 year old Wedgwood story unfolds in the well-lit cases of the new museum. Among the star exhibits are a first edition Portland vase from 1793, and five not quite perfect plates not sent to Catherine the Great of Russia in 1773 – seconds, but not as we know them in the outlet shops of Stoke.
The Wedgwoods were touched with greatness. One writer recently described Josiah Wedgwood as the Steve Jobs of his day. Josiah launched pottery-making as an industrial process. Both he and Jobs, the driver of Apple’s success, gave the public things they wanted to buy, in abundance.
A family painting in the museum by Stubbs (and yes, there are horses) shows Josiah’s daughter Susannah. Her son Charles Darwin occupied another great stage in history. www.wedgwoodvisitorcentre.com
The pottery story continues to this day. In 2014 the restored Middleport Pottery opened as a new visitor attraction. The Prince’s Regeneration Trust, bought the site in 2011 with a view to saving and restoring it for the nation. This is the last working Victorian pottery in the UK.

Emma Bridgewater’s factory is a modern Stoke success. Launched in 1985, this independent all British company sells a product made with clay from Wales, Cornwall and Staffs. It’s a place of pink hearts and colourful polka dots, and the company’s exuberant splatter pattern in cobalt blue. We took the guided tour, then enjoyed a sustaining bowl of Staffordshire Lobby (a wholesome stew) in the cafe, by the glow of Emma’s trademark spotted Aga. www.emmabridgewater.co.uk.
Moorcroft is another very distinctive version of Stoke’s great pottery story. In the Moorcroft Heritage Visitor Centre ceramics are fine art. Expensive, beautifully-decorated pieces made here are sold at Liberties, and are shown in the Victoria and Albert.  www.moorcroft.com.
This is a pottery close to the city centre, and a destination for the day tripper who can only take the train. Close by is the admirable Potteries Museum and Art Gallery, which displays part of the most valuable collection of Anglo-Saxon treasure ever found in Britain, the Staffordshire Hoard.

A metal detector discovered the items, dating from around 700 AD, in a Staffordshire field in 2009. Archaeologists combed the area and found more pieces. They can’t be sure if they were buried there, or just lost.
There is a link to real people here. Many of the 1800 artifacts, mostly gold, some studded with garnet, show the wear and tear of daily life, and possibly battle.The sword handles suggest regular use, I like to think rubbed smooth by anxious fingers of young Saxon warriors waiting for battle. http://www.visitstoke.co.uk/Staffordshirehoard.
In 2014 the museum honoured Stoke-on-Trent’s most famous contemporary son, Robbie William with an exhibition to mark his 40th birthday. The local newspaper, The Sentinel, devised a trail linking up some of the important places in the singer’s younger years.
They included The Red Lion pub, Burslem where he lived from 1975 to 1978, Mill Hill Primary School, (Sunnyside Avenue, Tunstall) where the singer spent his primary school years, and St Margaret Ward Catholic College, Little Chell Lane, Tunstall, which he attended from 1985 to 1990.

An important place in the singer’s life is Greenbank Road, Tunstall, where Robbie lived when he joined Take That in 1990. Then there are places he name-checks in his songs, including The Angel, Burslem and Scotia Road, Tunstall. The Queen’s Theatre, Wedgwood Place, Burslem, is where he first appeared on stage as the Artful Dodger in Oliver!
Stoke has another 21st Century attraction to add to its list, the Italian Gardens at Trentham on the edge of the city, cut through by the River Trent. The gardens are wonderfully old, designed by landscape architect Capability Brown, the last remnants of one of England’s great estates.

Since 2000 the new owners have turned them into a lively leisure destination. One striking feature is a restored copy of one of Italy’s Renaissance glories, 16th Century artist Benvenuto Cellini’s statue of Perseus with the Head Of Medusa. Who needs Florence?
There is a big leisure ambition here, reflected in features such as the new monkey park, where 140 Barbary macaques wander free in the woodlands. We lunched in David’s brasserie, part of the Trentham Shopping Village. Staff are friendly and attentive; there are bright ideas in the menu www.davidsbrasserie.co.uk

There is one last address to enter into the satnav, the Gladstone Pottery Museum. It is preserved as the last complete Victorian pottery factory in Britain, an example of the many places in Stoke where everyday items were produced in abundance. The original details are all present – cobbled yard, workshops and huge bottle kilns. One section tells the vital story of the evolution of the toilet and sanitation. www.stoke.gov.uk/museum

Industry has dominated Stoke for centuries, but there is green and rolling space not far from the city centre. We stayed at the Moddershall Oaks Hotel and Spa, near Stone. It nestles neatly in the gentle folds of the Staffordshire Hills. There was an inviting hot tub stood outside our bedroom door, and gym and spa facilities down the corridor.
The hotel has a good restaurant, with an interesting menu and well presented dishes. At breakfast we looked over a watercolourist’s view, a peaceful lake fringed by graceful trees. Walks and cycle rides (the hotel provides bikes) lead to the countryside and villages around.
www.moddershalloaks.com.
Robbie Williams trail  http://www.stokesentinel.co.uk/Stoke-Trent-Robbie-Williams-tourist-trail/story-20467538-detail/story.html