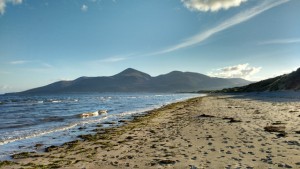 Mourne Mts, from Murlough Beach, N Ireland. Or is it the Caribbean?

Tourist boards will have us believe the places they promote are blessed with unending sunshine.  Think, when did you last see an umbrella in a  travel brochure?

I’m sure Ireland wouldn’t stoop to such meteorological subterfuge.

What’s the point pretending they bask under skies of cerulean perfection, when we know the rain they had this morning is lashing down on everyone else across the Irish Sea in the afternoon.  We share their pain.

With that in mind, my smartphone picture of  the most  celebrated conjunction of land and sea you will find in popular song takes some explaining.  Were they really the Mourne Mountains, in full  downwards sweep? Or had our motorhome holiday taken us to the Caribbean in error?

The truth lies in technology,. No, I did not photo-shop the landmark that was to fill songwriter Percy French’s pension pot.  We simply let the hour-by-hour weather forecasts on our  mobile phones be our constant companion. (To be safe we always consult two or three forcasts).  No more anxiously surveying the heavens for enough blue to make a sailor’s breeches. We chose a destination, and if there was a less than 25% of rain in any given hour, off we went.

They promised unbroken sunshine on the beach at Murlough, from 4 pm onwards, although it seemed not many others were using that app. We shared the glorious sweep of sand with fewer than 20 people, just as a family member was  texting us news of the multitude on her North Devon beach. Where it was pouring.

We were on the benign, east coast of N. Ireland – just across from the Lake District, in the Murlough National Nature Reserve. Owned by the National Trust, it has  some of the best sand dunes (officially “dune heath”) in Ireland.  And it held a big surprise.

A mile along the beach we thought we heard a children’s playground. Or was it the Ulster rugby team in vigorous training? The truth was stranger.  As we came closer the plump, writhing figures came into focus. It was a phalanx  of seals drawn up on the sand on the other side of the estuary, bleating and scolding and occasionally hauling themselves laboriously down to the water.

We took the boardwalk back to the car park through a natural carpet threaded with the colour of  vetches, trefoils, spurges, hawkweeds, cats-ears, gentians and ling heather. But this wasn’t  the sort of park you leave in a hurry. An old cottage had been given the ideal career change, as the most perfect little red-roofed and white-walled tea room .

Nobody ever walks into a NT tearoom and comes out thinner. The trust’s cake stand is one of life’s pleasures you cannot pass by, like free champagne. Regrettably, we had found a way. They only took that old fashioned commodity called cash, and we didn’t have any. But wait.  We had a fully-equipped cafe of our own. Back to the motorhome. Tea was served in less than five minutes.

Writers have been circumnavigating Ireland in a variety of interesting  and eccentric ways, on obliging beasts and in outrageous contraptions, including a fridge.  We took a more conventional tour, and only around the top third, in the comfort of a small motorhome, staying in camp sites where the showers were hot, the toilets clean and the nights quiet. And  hunting down National Trust  tearooms  wherever we could.

Expensive rooms in grand hotels are a fine thing, and I’m as susceptible to their extravagant allure as the next travel writer. But even former palaces have a, excuse my precision, back side, with unrivalled views of the early morning garbage truck.  So  why not our own observation post on wheels,  easily positioned for the best view of any  beauty spot?

So it might be breakfast in the Tollymoor Estate, near Newcastle, Co Down,  among some of the finest decorative trees on the island, as the sun lit up the  shimmering green foothills of the Mournes.  Then, maybe,  lunch under the  formidable Binevenagh Mountain, next to the Derry to Coleraine. line, one of Michael Palin’s great railway journeys of the world. What about  supper on the quiet banks of Lough Earne at Castle Archdale?  This place, so tranquil and overlooked, was the ideal a safe base  during the last war for the Catalina flying boats which carried out patrols over the Atlantic.

Like many people, I’m sure, I had consciously rejected  the idea of holidays in Northern Ireland, long after the peace settlement, when I was more at risk of a tree falling on me in a London street than encountering any upset in the  Ulster countryside.  And I confess that all those years of desperate, depressing news coming out of the province had left me unwilling to consider its appeal to the tourist.

One good thing to come out of N.Ireland’s troubled past is the high number of fine old estates, many of them created by the original “planters”, rich settlers from England and Scotland. Today they are one of the shining assets of the province, and the National Trust owns  a good number of them.

It also looks after a rich haul of landscape and other natural features.  Strangford Lough,  internationally renowned for its bird life,  is one. Another is  that geological sensation the Giants Causeway,  its remoteness and timeless sense of place recently restored when they built a new visitor centre.

We had been there before, so on our first morning, after picking up the van on the outskirts of Belfast in a welcoming deluge, we had  somewhere else in mind.

The weather app predicted bright skies late afternoon on the north coast. By the time we reached Benone Strand, tempest had given way to little white fluffy clouds drifting  amiably across  an inviting blue sky.  It was seaside perfection. Little groups, composing themselves like subjects in a Jack Vitraiano painting, stood about on the wide sweep of  golden sand.

Next day our elevenses stop was on the newly landscaped  waterfront on the river Foyle in Derry/Londonderry. We parked close to the Peace Bridge, a snake of sinuous silver under two high spars, like lowered swords, for cyclists and pedestrians, a symbolic handshake between the two  one seriously-divided sides of the  water.

As the peace continues to hold,  we can define Derry more positively, as one of the finest walled city in Europe, sharing the distinction with York, Durham and Dubrovnik. Inside the walls we walked elegant Georgian terraces,   a prime example of a planned, townscape, designed and laid out by London craftsman.

We had the BBC to thank for our last house call, in County Fermanagh on the province’s west fringe. This is close to the border with the Irish Republic, which curls up the West  coast and over the top like an apostrophe. (I  find it amusing, this geographically contradiction, where  Eire, Southern Ireland,  extends further north than N Ireland.)

The National Trust’s Crom estate, encircled by a scatter of islands and ancient  trees on the shores of Upper Lough Erne,  was the  main location for Blandings, a  searingly funny adaptation of the P.G. Wodehouse stories, starring Timothy Spall, Jennifer Saunders and Jack Farthing.  They also filmed at another of the trust’s properties, nearby Florence Court, a grand 18th-century pile set against a  powerful backdrop of  woods and mountains.

Unfortunately there has to be a winner out of these two. I would give the prize to Crom.  In its tearoom I found the biggest, the most scrumptious range of cakes in the whole of N. Ireland.

Gareth was provided with the motorhome by Bunk  Campers www.bunkcampers.com.