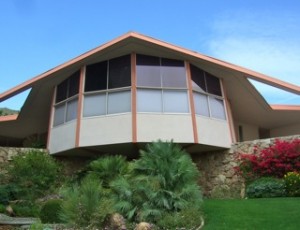 There’s something missing in Palm Springs, and at first it’s hard to pin it down.  Wailing police sirens? Didn’t hear one. Garish lights flooding the desert night? Not there: the community dims the illumination so nearby Mt Palomar can better see the stars.

No, more than that, it’s an entire absent dimension. Things spread easily out and along here, but hardly up at all. Even the tallest buildings stop at about three stories. It’s a very un-American urban landscape.

Even “urban” isn’t, strictly speaking, correct. This affluent sunshine resort in the wide Coachella Valley under the mountains is composed of six “cities” but the tenor is spaciously suburban. (British readers should remember that an American “city” is a local government unit, rather than the big, sprawling historical entity found in Europe).

Palm Springs is a series of joined-up small towns, crammed with greenery refreshed with an abundance of underground water. Each place has a centre lined with small and elegant shops, very good restaurants competing hard against the place just down the street, and boutique hotels.

The Viceroy, all vibrant lemon-yellow walls and cool white furnishings, is one of the best, a cool enclave of single story, tree-shaded villas dating from the 1930s when Clark Gable, Carole Lombard, Joan Crawford and Bing Crosby stayed.  www.viceroypalmsprings.com It was the Hollywood stars, flitting up from the studios for clean, clear air, outdoor dining by night and endless golf, who helped establish the resort.

We’re used to seeing US towns and cities first from above, as we drop down to the airport. Most visitors are likely to take the two-hour drive here from Los Angeles Airport. Anyway, there is a much better overview. Long before Americans made it to the Moon, a local man nurtured the crackpot dream to zing his fellow Americans up from the torrid floor of the valley 8,600 feet to the top of nearby Mount San Jacinto, “where it’s nice and cool” and the snow lasts, at least in ribbons, well into the summer.

At Valley Station we pondered the wire cables of the Palm Springs Aerial Tramway snaking at a crazy incline up the bare rock face. Now didn’t I have an urgent appointment down in nice, safe flat Palm Springs?

But once aboard the gently rotating car, and put at ease by our nonchalant operator, the eagles’ route gained an instant place on my list of lifetime rides. At the top it was 30 degrees cooler, the views from the restaurant were thrilling and 54 miles of trails beckoned, winding through the state park. www.pstramway.com

Many visitors would be happy to spend the rest of the day on one of the 100 golf courses – they include a city-owned course where it’s easy, and inexpensive to book a round. Instead we toured the wide scatter of 1940s-60s buildings, built low and attractive in the “mid-century modern” style. I liked the 1963 Tramway Gas Station, its roof like some futuristic radar-evading jet.

Guided by a helpful addresses of the stars leaflet from the Convenion and Visitors Authority we found the semi-circular home on Ladera Circle where Elvis and Priscilla stayed after their Vegas wedding.

The Desert wraps around around Palm Springs, and survives in fragments within the city limits. The Living Desert is a super little zoo, on the resort’s edge. It’s a tribute to private giving (signs are everywhere naming the rich local benefactors), volunteer effort and a team of bright experts saving threatened desert animals and plants, ready for reintroduction to the wild.

The desert they recreate here is a riot of life, jewelled with exquisitely tiny flowers and statuesque cacti, with glimpses of shy desert foxes and that staple of immense US spaces, the roadrunner. A Mexican wolf (extinct in the wild since 1981) held us with intelligent gaze as a volunteer, a studious man well past retiring age and passionate about the zoo’s message, explained the us the zoo’s ongoing plan to reintroduce it to the wild, east of Phoenix. www.livingdesert.org/

After this intelligent introduction to the desert and its conservation, we took trips out of town to two raw and very elemental destinations in the real thing. One very good reason to not build tall in Palm Springs is the San Andreas fault. which runs close to the city, 20 minutes out of town. As we bumped along through the desert in a red Jeep our guide Morgan deciphered one of the most twisted and tormented landscapes on earth, where the Pacific and North American plates collide. It’s her job to check, after the frequent minor quakes and flash floods, how far her territory has been rearranged, with gulches shut off by rock falls and new springs running in the palm groves.

Morgan’s virtuoso tour led us through a replica Cahuilla Indian village and up a very narrow slot canyon. Don’t even think about the movie 127 Hours. Her high speed patter ranged from her childhood experiences playing in a disused goldmine (one is recreated here) to assigning us all an – eerily apt in my case – Indian name. www.red-jeep.com.

Back in the resort we found Shields Date Garden, a good example of  what the Californian entrepreneurial spirit can achieve. Floyd Shields started his roadside buiness with his wife Bess in the 1930s, and gave his daily talk daringly entitled Romance and Sex Life of the Date to visitors.

Today the story of how Floyd set up his gardens propagating the Zahidi, Jumbo Royal Medjool and Deglet Noor dates, without chemical fertilizers and pesticides, is told in a  15 minute film (the same name as his talk). The place has a wonderful 1930s retro feel about it. www.shieldsdates.com.

Whatever you do during the day is a mere preliminary to the  main event  in Palm Springs. Eating out. There are many contenders for best French maitre d’ in Southern California, but I nominate the amiable Antoine Babai in the casually elegant Le Paon, tables spilling onto a first-floor balcony above the gilded El Paseo shopping district.

Antoine greets everyone like an old friend with the same Gallic grace, while his brother, executive chef Eddie, sends out traditional French dishes from the kitchen, enhanced with some splendid Napa Valley wine. We were ordered to leave room for a miraculous soufflé. www.lepaonrestaurant.com.

This fine formula, with erudite light-touch service, was repeated the next night at the Citron restaurant, in the Viceroy. Our table was set by the swimming pool, in a setting unchanged since the Thirties. We imagined Clark, Carole, Joan and Bing taking their pre-dinner swim when they stayed in one of the lemon tree-shaded villas. ww.viceroypalmsprings.com

We made one more out-of-town call next day before we drove back to Los Angeles. With Ken Huskey as our guide, we weaved among the mesmerising, swishing blades of 3500 turbines. Ken makes the San Gorgonio Wind Park on the edge of the resort – enough energy to power Cardiff–-into an exciting spectator sport. We drove under several generations of turbines, all turning to their own tune, from antique ones on rickety turrets, to the latest sleek, smooth giants.

Ken answered our questions about size, how they work, the economics and politics of wind. No, the blades rarely kill birds. And the new ones are not so noisy. And guess who the latest operator is? None other than the US’s energy villain BP. They replaced 139 old turbines with eight of the latest make, producing almost double the power. http://www.thebestofthebesttours.com