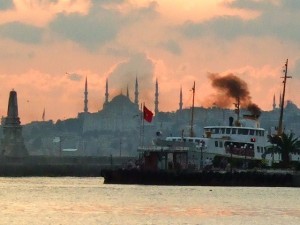 Bosphorus, one of the world’s great waterways

I’ve been to see Skyfall, the latest James Bond, where entire cities and slabs of gorgeous scenery are product-placed.

London is the main location lead, of course, although I never knew Temple Underground Station was quite so busy. Top landscape plaudits must go Glencoe, the most famous Scottish glen, cared for by the National Trust for Scotland, with a smaller role for nearby Glen Etive.

And while I don’t know Shanghai, and its night light show, and Macau, I’m familiar with Istanbul, which has the thrilling pre-title sequence all to itself.

And while no street pursuit would make it to the next bend in the road in the gridlocked all day rush-hour Istanbul I know, the car, motorbike and train chase is certainly impressively done. And I’m so pleased that the roof of the Grand Bazaar could take the weight.

Here’s  a piece on this marvellous East West junction city I wrote earlier.

Istanbul is one of the glories of world travel, one of the great cities of the world bridging two continents. Consider it romantically remote, at the terminus of the Orient Express (6 days/5 nights, once a year from Paris, via Budapest, Bucharest and Bulgaria). Or close enough for a weekend break, just four hours by Easyjet.

Istanbul is a splendid collision of civilizations, crammed with blockbusters from 2,500 years of history. It swells up on seven hills, out of early Greek remains, via the Roman Hippodrome and Aqueduct, into the mystique, power and glitter of Byzantine and Ottoman Empires.

Aya Sofya is one of the world’s A-list, tingle-factor buildings, a
direct link back to when Emperor Constantine saw the city as the
successor to Rome.  Inside this vast square building, columns and
piers rise over massive Byzantine mosaics, up to a glorious
architectural illusion in which the dome seems to float weightlessly
on a circuit of 40 arched windows, which flood the interior with
light.

Built in 537, it was the greatest cathedral in Christendom for 900
years, until the Turks took the city (then Constantinople) in 1453.
It remained the world’s largest cathedral until Seville’s cathedral
was built in 1520. It was a mosque for 500 years until it was
deconsecrated in 1935.  The best view of the vast dome of the Aya
Sophia and the rest of the old city, spread across seven hills, is
from one of the many ferries that ply across the mile wide Bosporus,
separating Asia from Europe.

The 20 minute, 75p journey ranks alongside the Staten Island and
Sydney Harbour ferries as one of the world’s best city trips on water.
This is the perfect way in from Sabiha Gokcen Airport, on the east of
the city, which EasyJet uses.  (Take the bus outside the terminal to
Kadikoy, then the ferry to Eminonu. Often the ferry will pause, to let
some great rusty freighter roll down the sea lanes from Russia to the
Mediterranean.)

The heart of old Istanbul is the Sultanahmet district, dominated by
the Topkapi Palace. Only the only Alhambra in Granada can match it for
opulence. And the fabulous Blue Mosque, with its six minarets
shimmering on the hill. Sultan Ahmet built it to trump the Aya Sofya.

This is a huge city, but you can take in its old heart in a meandering
day on foot, with help from ancient and modern public transport. First
take the new tram up to the Roman Valens Aqueduct.  Saunter on to the
500 year old Grand Bazaar, the model for Turkish bazaars everywhere,
with 3000 shops in 60 lanes.

Grab a fish sandwich at a stall under the Galata Bridge on the banks
of the Golden Horn, the inlet from the Bosporus into old Istanbul –
piping hot fresh fish, perfectly fried in olive oil, packed into a
hunk of new-baked bread. Fast food perfection.

I couldn’t possibly recommend just one restaurant – the choice of
small, family places is cosmic. Kumkapi, below the old city, and
Nevizade Sokak in Beyoglu, are awash with fish restaurants.

Cross the Golden Horn on the Galata Bridge and ride the Tünel, the
world’s second-oldest subway after London’s Underground, up to the
smart new Beyoglu shopping district. A real insider’s guide to
Istanbul is any book by Nobel Laureate Orhan Pamuk, who locates his
characters in so many settings of Istanbul. His latest novel, The
Mueum of Innocence, could double as a gazetteer of the city.

There are upmarket, international hotels in old Istanbul, if that is
your taste. But in my view the heart of the city requires something
fledged from the tangle of ancient streets. Our favorite independent
boutique hotel, the Empress Zoë, is fashioned from old townhouses in
Sultanahmet, full of twisty corridors, rooftop bars and balconies,
facing the glorious floodlit Blue Mosque at night, and the endless
parade of ships gliding past on the water below.

The lobby is a sunken vault, lined with ancient stone. We climbed
tight spiral staircases to our room, hanging with local textiles, in
the hotel’s deliciously cool core. We took breakfast — pastries,
fruit, dates, yoghurt, cheese and olives — in a quiet corner an
enclosed garden, by a burbling fountain, under the ivy-clad ruins of a
Turkish bath house. www.emzoe.com.

There is so much more to see in this tight old quarter, but the most
refreshing place on a hot day is the underground Basilica Cistern,
which does the perfect Phantom of the Opera imitation – damp, dripping
and eerie under 1500 year old brickwork.

One day trip I would recommend from Istanbul‘s flat-out commotion is
the quick flit to the city’s nearby car-free retreat, the Princes’
Islands. The ferry takes 45 – 60 minutes from Sirkeci, in the old
city, to this string of nine islands just off the Asian coast.

The islands take their name from the troublesome royals exiled here by
sultans down the centuries. Istanbul’s rich followed, building elegant
clapboard mansions among the pine groves. Büyükada, the biggest
island, is serene and car-free – transport is by horse-drawn phaeton.
You might walk to the peak-top Greek monastery, dine in the
monastery’s simple restaurant and enjoy the view. On the ferry back
sample a salep, the milk-based drink made from orchid root.
Back in the city, the ultimate pampering experience is a Turkish bath
in the ancient Cagaloglu Hamami (www.cagalogluhamami.com.tr). Then
relax in a Seraglio Point tea garden under the Topkapi Palace, as the
evening ferries zing across the Bosporus.