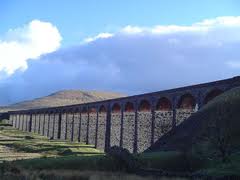 Ribblehead Viaduct – was this the railway navvies’ greatest triumph?

The ITV “Yorkshire Western” Jericho celebrates the men and women who built the Ribblehead Viaduct, centrepiece of the wild, fabulous and  slightly mad  railway, running over the top of England in the 1870s.

The viaduct, that heroic vindication of their labours, still stands, part of a living, working Settle-Carlisle Railway, one of the great  scenic railways of Britain.

Jericho was one of the temporarty settlements of the railway workers, “navvies”, who built the viaduct. There is an excellent walking map and leaflet on the viaduct from the Yorkshire Dales National Park.

(It explains: “Jericho – the first Old Testament city after the River Jordan crossing when the Children of Israel, under the leadership of Joshua, laid siege to the city and took it.”)

By 1875 Jericho and other settlements had been demolished. In August 1875 the first goods train passed over the viaduct from Carlisle to Settle. “On May 1st 1876 the first proud passenger train with its engine in dark green livery hauled carriages over the 86 miles between Skipton and Carlisle.” 140 years on, trains still run daily over that prodigious creation of those brave workers.

This is my account of a train trip along the line and over the viaduct.

I was at Carlisle railway station, aboard the 11.55, studying the Ordnance Survey map and beating a mental route through the tight-packed contour lines to come.

The Leeds-Settle-Carlisle line must be the most thrilling public transport experience in Britain. It was the daftest, the most heroic achievement of the Victorian railway barons, driven across desolate mires, aslant howling moors and speared through the sinew of the Pennines.

If common sense had anything to do with it, the railway would never have come to such a wild, remote, awesomely beautiful place. And 20 years ago ‘common sense’ almost prevailed. The line was very nearly closed.

Our nifty two-coach diesel train, comfy high-backed seats in speckled green, bowled along the flat, rich lands of the Vale of Eden, occasionally swapping river banks. Every so often we took to the air to soar high over a valley. Far below, a green river plain was dotted with molehills.

We paused at tiny stations with stout Viking names such as Langwathby and Lazonby, as if to take stock of the endeavour ahead.

Slowly, the abundant fields with their serpentine streams gave way to moorland. Sheep, like wizened Yorkshire aldermen, chomped the rich grass.The line channelled between stone walls which reared and dipped like a fairground ride. Even our sprightly diesel began to growl.

The line was turning serious. Let’s dip into history for a moment. In 1870 there were two perfectly good lines to the North but the recklessly competitive Midland Railway would insist on a third. The only alignment left was up the spine of England, the 77 miles from Settle to Carlisle.

And, as any GCSE geography student would have told them, that was bad news.

Railway navvies, many of them ex-soldiers from the Crimea, toiled in the cold and wet to erect 22 viaducts and 362 bridges and excavate 14 tunnels. They bought us scenery at a terrible price, many paying with their lives. For a century, London to Glasgow expresses thundered through this sensational wilderness. Then philistine old BR sought to end the party. It ran the line down and warned that its central structure, the astounding 24-arch Ribblehead Viaduct, was unsafe and would cost a fortune to repair.

In 1988 the grey men in accounts announced closure. Outrage gathered like snowdrifts on the flanks of nearby Pen-y-Ghent. Somehow in those pre-Lottery days the money was found to restore the viaduct. A work of art was saved.

We began to climb. The mountains which had seemed so benign and far off, now began to close in. Water coloured like Islay malt cascaded off rock shelves. Wild Boar Fell hove into view. Once this was the line for all stations to Hell.

Picture the crews of those old steam locos, the firemen frantically shovelling coal, while the grim-faced driver drove at the clouds. On we curved, under great peaks slashed with waterfalls, past stern grey rock faces, through tunnels necklaced with bayonets of ice in winter.

Train delays up here put leaves on the line in perspective. Here, every type of snow is wrong. When things get really bad they switch to the winter-weather timetable displayed in emergency red type on every platform. In 1947 a train was trapped up to its chimney here for two months.

Dent – even the names are short, as if to save breath – is the summit, at 1,150ft the highest station in England. It was clamped under a Bronte-esque gloom, even on a summer morning.

Blea Moor sounds like something a giant Snoopy spat out. Its signal box is as remote from Clapham Junction as Ulan Bator.

To my amazement a real signalman stood at the levers. We reached the famous viaduct.Even today, trains gingerly pass over, as if out of respect for something so ancient. This must be one of the few places in Britain where even non-trainspotters stand and gaze in awe at a mere diesel train.I alighted at Ribblehead station to inspect the viaduct, now fully repaired.

At an immense height, a single plume of water hung spookily from the stonework, its drips coalescing into bloated, shuddered globules as they fell. The only sound was the wind moaning under the 24 arches.

A plaque commemorates the gallant navvies who lived around here while they built the line, in the wretched shanty towns they called Batty Green, Sebastopol, Jericho and Jerusalem.

Back on board and the Pennines conquered, we almost freewheeled into Settle down the famous 14-mile ‘Long Haul’, a steeper slope even than that killer incline from Carlisle. We were back to country railway mode, coasting through the gentle landscape of the lower Yorkshire Dales.

For the final act we snaked through once-grimy industrial valleys, now shoulder-to-shoulder with smart high-tech units, to the end of the line in Leeds.