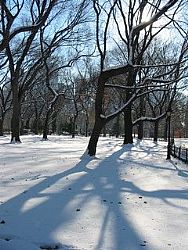 The first New York City snowstorm of the winter is one of the world’s great urban sensations. It’s a weather event to stand alongside the opening deluge of the monsoon in Delhi, or the start of spring in Paris.

To the trigger of  the opening snowflake, New Yorkers select from their white-out wardrobe. They take to the streets in high-style mittens, mufflers and snow boots.  As soon as there is a white carpet deep enough to support them, there will be skiers in Central Park.

In this city, the dumping of several thousand tons of chilled moisture is a foreseeable occurrence. Nothing need grind to a halt. An entire city glides, prepared, primed and uncomplaining, into heavy weather mode. In the land of boundless opportunity there is no “wrong” type of snow. Free enterprise sees to it that willing sweepers step forward to clear the sidewalks, at a price.

We were there at the start of December, and this snowfall was early. Were those the last days of the old “normal”, or one of the first indications that the city was in for a meteorologically rocky ride? For the record, and here the statisticians record these big weather events as the British archive cricket scores, this was the earliest December 5 snowfall since 1938. It’s a measure of how things may, or may not, be changing that this record has been broken several times since.

First it had to start, and that was foretold, almost to the minute. We woke to a shivering city, strafed by a north easterly out of Newfoundland. Weather forecast wars were raging on the TV news channels. Correspondents spaced along the turnpikes of New Jersey (under-road heating keeps traffic flowing nicely) charted the advance of the low pressure system which had been swaggering up from the south west for the past three days.

A TV station had a helicopter up over the Hudson. It showed the first live shots of out-runner snowflakes. They had predicted a 7.15 am start; the snow actually arrived in Midtown at 7.25. Then it fell all day.

In this well-ordered city you can conduct your business, or pursue your visit as a tourist (and take the chance to dive indoors whenever you can), undeterred by the great white force of nature, which is outside enveloping everything. But first, to breakfast.

One golden rule of the Big Apple visit is take your breakfast out. It’s each to his speciality in this town. The reasoning seems to be: you don’t sleep in a restaurant, so why should you eat in a hotel? Starting at daybreak, there’s massive culinary opportunity out there, from standard diners to early-opening restaurants.

We headed to Sarabeth’s on Madison Av. New Yorkers were already meeting friends, doing business or sitting alone with the papers at shortly after 8 am. A waitress in long apron was at our table with the coffee even as we sat down. Outside a fashion parade of children trudged to their smart schools through a thickening stratum of snow on the sidewalks. We ordered a Goldie Lox (scrambled egg, salmon and creamed cheese), and Banana Blueberry Breakfast Blizzard, with a side order of Abricadabra, a health giving house concoction of apricots with fresh pineapple and currants.

Sustained by Sarabeth’s, we were ready to take on the mighty Metropolitan Museum of Art, on 5th Av and 82nd – two million works of art gathered from the world. Our first stop was the museum’s Medieval Sculpture Hall for the Christmas tree, with its warm aura of the Mediterranean. 18th-century Neapolitan angels and cherubs perched in its boughs, above a Baroque crèche. This annual display was set in front of the 18th-century Spanish choir screen from the Cathedral of Valladolid. Tasteful recorded music of the season played.

When we emerged from the Met, from a random route around French impressionists, African art and 1930s costume, the snow was falling fast. We took the subway to Times Square, rescued from near terminal sleaze by the power of the market. They chased out the tawdry sex shops and restored the greatest city light show on earth. The neon pulsed and danced above us under glowering clouds while busy city transportation ladies in vivid day-glo coats charmed the traffic to go where they asked as the snow obscured the white lines.

We dipped tentatively into some light buying. It turned into an obliging alliance with the world’s greatest “Yes, we will sell it to you” culture.

We wanted a NYPD police car for a nephew. A search through four floors of a vast toys emporium was fruitless. Just as we were leaving a shop walker spotted our frustration. ‘We give up.’ ‘Nobody gives up on my watch. NYPD? Sure I can do that.’ She led us to the elusive item. I think she really meant her parting words: ‘I love my job.’

Outside, the weather was probing a weak point. New York’s snow control couldn’t handle the gutters, now brimming with slush; a foot out of place and we were in, ankle-deep. So, slapping the icy patina off our coats, we dived into Macy’s on Herald Square, projecting warmth and cheer like some retailing supernova, alongside the mere stars of the lesser stores all around it. You could wander for several days in here. At every check-out they were selling – in effect – Macys the Movie, the original, 1947, Miracle on 34th Street. Macy’s is the hub of the US Christmas experience.

If the weather permits, a fulfilling shoppers evening stroll should take in the Rockefeller Centre Christmas tree. We had seen it lit the night before by some high city figure, protected by a cordon of cops, each the size of a giant redwood. Then to Lord and Taylor, on 5th Avenue between 38th and 39th, usually voted the most elaborate window displays – ‘These windows stop traffic!’ – followed by Saks 5th Avenue.

We called a shopping truce next morning and rode the Staten Island ferry. Applying literally the ‘everything has a price in the US’ mantra, this short crossing would cost $50, maybe $100; instead tramp and billionaire alike troop on for nothing. You ride this ferry from the toe of Manhattan, of course, not for the trip out but for the return. This is how it was for all those immigrant millions approaching NY by water.

On our return it was too cold to step on deck. The Island was etched against clear deep blue chill. Afterwards we headed up town, a lazy diversion through Greenwich Village, until we found a Belgian restaurant of exceptional zip and bustle, all antique wood and mirrors. Just one among NY’s full United Nations of eating out opportunities. Full, so come back at 3.15. We did. In New York anytime is the sensible time to eat.

We set aside our last day for shopping, after a morning in the Natural History Museum. A Saturday, and the big stores were bursting. An hour in a crammed Bloomingdale’s taught us either to wander with no method at all and buy things as you fancy; or carefully plan your route on the web or by guide book. Our easiest purchase was a camera (about £100 off UK prices) at the massive B&H Photo on 9th Av and 33rd St in the softest of sells (‘It’s entirely up to you if you want to buy this thing’). Our goods were zipped in an overhead conveyor to the checkout.

On an icy day in NY one of the finest (free) places to stay warm is the once again grand Grand Central Terminal, architect Whitney Warren’s epic 1913 building behind a triumphant facade featuring statues of Hercules, Minerva and Mercury. The photograph of the Concourse – travellers spot-lit by four shafts of sunlight – adorns many a student wall.

It took the intervention of Jacqueline Kennedy and others to save this Beaux-Arts marvel from possible termination. Nearly every surface was cleaned or repaired, including the half-acre of Tennessee marble in the Concourse, and that astonishing map of the Galaxy on the ceiling.

Out of many food outlets we chose the Oyster Bar, under vaulted ceilings of Gustavino tiles. You forget this is still a railway station, not some great secular cathedral full of space and light and gold fittings and elegance. We headed back up 5th Av. to our hotel. Behind us the setting sun caught the tip of the biggest Christmas decoration of all, the red and green of the Empire State building.