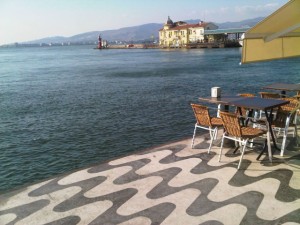 On a wide bay under a circuit of high hills half way down Turkey’s west coast is a big city with a long history. Today Izmir is one of the fastest growing cruise ship ports of call on the Aegean, and an excellent base for excursions to nearby Ephesus and Pergamon.  I spent some lazy days browsing the broad boulevards, walking the elegant seafront, riding a century-old cliff face elevator, and visiting some of the most extensive Roman ruins after Pompeii.
Best western

Izmir is an ideal base for visiting the west coast of Turkey, if you don’t require a sandy beach and the not particularly typical, or authentic, facilities of the country’s busy resorts. The airport, served by UK budget airlines, is only 10 miles from the city centre. I was surprised and delighted to find Izmir crowd-free in the first week of August, when nearby historic sites such as Ephesus and Pergamon would have been awash with tourists. I stayed high up in the waterside Crowne Plaza Hotel, with stupendous views over the bay. A free shuttle bus plies the six miles to the city centre. In the evening the fishing boats tied up on the waterfront promenade serve the day’s catch, still sizzling from the barbecue, between great hunks of bread. Utterly fresh: perfectly simple.

There’s a link between original Izmir, then called Smyrna, and William Shakespeare. The bard gave Hippolyta, Queen of the Amazons, a key role in Midsummer Night’s Dream. Smyrna is one of the cities Hippolyta’s Amazons are said to have founded. Alexander the Great built up the city and the Romans finished the job. It’s worth a visit to the Roman and Greek remains, the Agora. Go early morning or late afternoon to avoid the heat, and walk among the colonnades and remnants of once mighty gates. Statues of Poseidon, Demeter and Artemis from the altar of Zeus are displayed in the site’s Archaeological Museum. They are knocking down homes and rehousing people, and taking down a multi-storey car park so the digging can be expanded.  The argument is this: more uncovered antiquities should mean more visitors and a boost for the local economy.

Most people who visit izmir by cruise ship are whisked off to the big attractions by coach, at £40 a head or more. I recommend taking a personal guide instead. Three or more people, and you save serious money on those tours. My guide gave me a tour of Izmir, breaking for an excellent (£20 for two) lunch in the market. Our last call in the city was the Asansör quarter for a trip in the antique, recently renovated (and free) elevator, enclosed in a tower made of bricks imported from Marseilles. It zings locals up from the cobbled, sea-level street to the cliff-top neighbourhoods. Stop at the terrace cafe for the best views over central Izmir. Next day he took me to Epehesus (50 miles away). You can now reach Selçuk (for Ephesus) on the railway, there and back in a day.

The spacious Konak Square, with a 1901 clock tower as its central feature, is the spiritual heart of the city, and, arguably, of modern Turkey. The independence fight began in this very square. Two years later, in 1922, the nation’s founder Kemal Ataturk concluded the bitter struggle that finally ejected the Greeks here. It’s all in Louis de Bernière’s Birds without Wings. From the square, it’s a short stroll to the cafe-lined seaside promenade, the Kordon – it now has the Güzelyali (Beautiful Waterfront) designation – and the customs house on Konak Pier, built by Gustave Eiffel and restored as a chic shopping centre.  I recommend the short trip across the bay on one of the the regular ferries from Pasaport for some fresh sea air and good views back over Izmir.

Ephesus is a fabulous place, the largest collection of Roman ruins in the eastern Mediterranean, the closest thing to Pompeii as a place of buried marvels still to be excavated – only an estimated 15-20% have been unearthed. But it does get extremely busy (and very hot). Last year it was Turkey’s most-visited historic site, outside Hagia Sophia in Istanbul. You’d be wise to go as early as you can, perhaps staying overnight in nearby Selçuk. It makes sense to use the eastern entrance, then walk down the Marble Road, past the many highlights, such as the Library of Celsus and the amphitheatre, with seats for 25,000 or more. Be careful with your possessions. I had my wallet stolen at the gate. I was targetted when I took out my wallet to shoe identification.

Tours to Ephesus often add on the village of Sirince, about five miles away in hills smothered with olive groves and vineyards, and fringed by pine forest. The houses are mainly 19th century or earlier, and a number have become boutique hotels. Local people make wine and olive oil and raise tasty peaches. I had the narrow streets,  full of tourists by day, almost to myself in the evening and early morning. I stayed at the Nisanyan boutique hotel. At dusk I sat on the quiet terrace, watching the swallows hand over to the night shift of bats – in the space of a few minutes. It was Ramadan. They announced the pre-dawn feast by someone walking round the village beating a drum. Nessun dorma – none shall sleep, as they say. Authentic village life.
http://www.nisanyan.com/

For more information on Izmir: www.goturkey.com