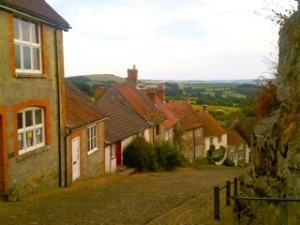 Set off to the West Country with no particular destination in mind, and you may not make it beyond Dorset. I pay the county a call, and am intrigued by its many attractions, including one of the best resorts on the South Coast, a hero’s home, mysterious hill forts and the golden road where they shot the nation’s favourite commercial.

You’ve seen it on chocolate box tops and calendars and in one of our favourite TV ads, the 1973 Hovis “Boy with a Bike” commercial. The cobbled Gold Hill in Shaftesbury curves gloriously and steeply (cycling bread delivery boys need very good brakes) down, against a backdrop of the shimmering hills and woods of the Blackmore Vale. We called in one summer Sunday evening after the crowds had gone. Our reward was a car and people-free photograph – a tourist halfway down obligingly moved out of shot.

The town, at 715 feet above sea level, is one of the loftiest in England. The Shaftesbury Heritage Trail links its many historic highlights, including the excavated foundations of the Abbey, dissolved by Henry VIII, in a peaceful walled garden. Download it from www.shaftesburyheritage.org.uk

Bournemouth is in the top crop of our seaside resorts, bursting out of its genteel past, and boasting attractions new and restored. The promenade along the long sandy beach is one of the best in Britain. The restored (2008) Boscombe Pier at the recently-revived eastern end of town is a marvel. The new designer beach huts are a mere £75,000, or £250 a week to rent. We took a 500 feet high ride in a helium balloon tethered by a steel cable in Lower Gardens for an overview of this boom town. Provisioned with Purbeck ice cream – “farm made and natural” – we strolled on to the sedate west end, where chines, steep-sided green ravines, run down to the beach. “Walk the asphalt paths of Branksome Chine,” urged John Betjeman, “in resin-scented air like strong Greek wine’.

Dorset is a county of contrasts. We took an easy afternoon’s drive north from Bournemouth, starting at the Sandbanks Peninsula, Dorset’s most affluent corner. Just offshore, in Poole Harbour, is Brownsea Island, with its tenacious population of red squirrels. A few miles north is pretty little Wimborne Minster. The twin-towered church (minster) dominates this compact ancient town centre, with its narrow streets, courtyards and lots of one-off shops. Two miles west, Dorset turns remote and mysterious – and floral – in the Iron Age hill fort Badbury Rings. The National Trust look after this wide open grassy place. 14 species of orchid grow in and around the concentric rings of bank and ditch. There are high views all around, deep into Hardy’s Wessex.

The Isle of Purbeck (not a real island, but a beautiful tucked-away corner behind a high ridge) is another of this county’s abrupt and intriguing gear changes. It’s much as it was when Enid Blyton set her Famous Five stories here. Take lashings of ginger beer and hunt down the locations (www.gingerpop.co.uk.)Enthusiasts have restored the steam railway to Swanage she would have ridden (www.swanagerailway.co.uk.) My Purbeck picks include Corfe Castle  – gaunt and tremendous on its high hill above a pretty stone village – and Britain’s Serengeti, the Studland National Nature Reserve. Instead of lions and elephants this heathland hosts all six British reptiles – adder, grass and smooth snake, sand and common lizard and slow worm. And do walk the soft clifftop turf of this crinkled coast – the epic SW Coast Path starts here.

T.E Lawrence is one of our most enigmatic heroes. He was propelled to fame by his role in the Arab Revolt against the Ottoman Empire of 1916–18, and immortalized in David Lean’s 1962 film Lawrence of Arabia. He became a mechanic in the RAF, then retired to his beloved Clouds Hill, a secluded cottage deep in the woods near Wareham. He was killed in 1935 in an accident riding his favourite motorcycle close to the house. Today Clouds Hill is one of the National trust’s most unusual properties. The sparse rooms are much as he left them. There’s an exhibition on his life. Look for the sleeping bag which George Bernard Shaw and Robert Graves are said to have slept in on visits. Stolen in the 1960s, it was anonymously returned in 2001.

In a town of so many hotels, you need to be distinctive to stand out. The Urban Beach in Boscombe has a jolly informality about it. The fear that we had stumbled into some grungy hang-out for surfers was quickly dispelled by the unpretentious quality of our room. I liked the big hand-painted Japanese headboard, the Fogarty duck down bedding and the Arran aromatics toiletries. The bar is full of invention, with a long list of cocktails and smoothies, and “triple certified coffee.” Easily the liveliest boutique hotel I have stayed in. The ethos of “sustainability, smiling and having fun” extends to the newly opened (2009) sister restaurant, the Urban Reef, 500 yards away on the seafront.  We basked behind a three-storey high glass window, flooding the building with sunlight. www.urbanreef.com,  www.urbanbeachhotel.co.uk