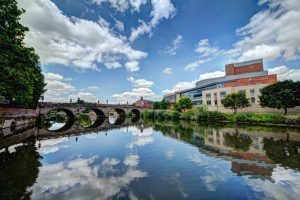 River Severn, with the Theatre Severn

Charles Darwin, Shrewsbury’s most famous son, was born in 1809 in this handsome border outpost within an almost circular loop of the River Severn.

I took the train to one “England’s finest Tudor towns” and one of England’s most appealing day trip and short break destinations.

I imagine E.M Forster sent his characters north to Shrewsbury “the astonishing city” in Howard’s End 100 years ago on a train just like mine. All that was missing was his “low rich purr” of a steam engine.

Another favourite line, the epic 121 mile route from Swansea ends here too. But there are good connections from all over.

Did the Lion, Shrewsbury’s 16th century coaching inn, alter the course of

science?  A certain harassed young man in a frantic hurry was grateful for the

stratospheric speed of the “Shrewsbury Wonder” coach to London – 158 miles

in under 16 hours. The Lion’s owners started the service a few years earlier.

Would Darwin have caught the Beagle, for the voyage that led to his theory of

evolution, without it? After the railways finished off the Wonder, management

concentrated on running a hotel of distinction for guests such as Disraeli,

Paganini (who performed here) and Dickens, who worked on Pickwick Papers

Roman bath house recently unearthed at Wroxeter. This garrison, where

was a thriving city for retired (evidently fitness-obsessed) soldiers. After 1400

years of underground slumber, this huge site, the fourth largest Roman town in

Britain, became one of the first archaeological visitor attractions.

The excellent museum explains the health and beauty practices of  5000

citizens. Take the headphones tour, for an account of how Romans kept fit in

chilly Britain. Very impressive are the 2nd-century municipal baths, and a big

chunk of the huge wall dividing it from the exercise hall. Then see the Roman

West. Within this town of 400 year old black and white timber-framed

properties in the big protective loop in the River Severn, hundreds of

independent shops huddle together for economic security. They line the

and much more. The specialist shops opted for online salvation, and grouped

ploy since taken up nationally.

And there are distinctive restaurants to

Shrewsbury has two principal bridges across the River Severn, the English and Welsh bridges, gateways to the town.

The first English bridge, medieval, was replaced in 1769, but altered again due to changing water levels. The present bridge, a masonry arch viaduct, was built in 1926.

The Welsh Bridge, on the other side of the town, is still on English soil. It is simply closer to Wales.

Frankwell Foot Bridge, a cable-stayed steel box girder bridge supported from a concrete tower. It appears to bounce as you cross.

The Porthill Bridge connects Porthill with The Quarry and the town centre. It also experiences significant vibration, even when only a few people are crossing it.

The Kingsland Bridge may be the cheapest toll bridge in the UK – at just 20p to cross.  It is also known as the Penny Bridge.

Greyfriar’s Bridge (the 1880s) replaced a ferry between St Julian’s Friars and Coleham.

Shrewsbury’s Railway Station Bridge, built in 1838 to carry the Shrewsbury to Wolverhampton line over the Severn. The iron was cast at nearby Coalbrookdale.

Also the Telford Way Bridge and the Castle Walk Footbridge .

Just over the English Bridge is Shrewsbury Abbey, where the fictional Caedfel

Meeting.” Then I followed the curling path along the banks of the Severn, with

on the river, to the park local boy, later BBC Gardener Percy Thrower tended when he worked here. (He is responsible for The Dingle in the Quarry, Shrewsbury’s, 29-acre parkland, encircled by a loop of the river Severn.).

Over the river is Shrewsbury School, site of cricketing poetry. The great

cricket writer Neville Cardus worked there around 1912: he would “gather the

stumps from a dozen pitches and carry them in sheaves, a solitary reaper in

the evening sunshine.” I ended my walk at the Welsh Bridge, at the Armoury

pub (great use for an old industrial building, opposite the brand new Theatre

Severn) for a pint of Shropshire Lad. www.armoury-shrewsbury.co.uk

The Bellstone (in the courtyard of Morris Hall, centre of town), smoothed by

countless finers, is one of the most conspicuous pieces of evidence that led

Darwin to his great theory. The young Charles saw that extremely ancient

geological forces must have moved the stone here, many miles from the

Scottish Borders, where it is usually found. So the world had to be much older

than people thought. The stone is one of the stops on the Darwin Trail. They

include the elegant round St Chad’s Church where he was baptized, his old

school, where he didn’t wash his feet – “I confess it is nasty, but we have

nothing to do it with”. His statue has stood outside the town’s library (his former school) since 1897.

There are some striking monuments to the man – the Darwin Gate with its clever alignments, and the remarkable 40 feet Quantum Leap, marking the 200th anniversary of his birth in 2009.

In the Shropshire Regimental Museum inside Shrewsbury Castle are  collections of pictures, weapons, uniforms and memorabilia from the 1700s to today.

Shrewsbury Museum & Art Gallery re-opened at the old Music Hall in 2014. The galleries: Roman, Shropshire, Medieval, Tudor and Stuart galleries. On display are Shropshire finds such as Roman tombstones and headstones and the Shropshire Mammoth. There is also a fine Tudor collection.

Built in 1596, Shrewsbury’s Old Market Hall was restored and re-opened as a contemporary cinema and bar in 2004.

Find the town’s award-winning indoor market beneath the clocktower.

Look closely at some of the buildings on the High Street and see if you can spot Margaret Thatcher, Michael Heseltine and Mick Jagger.